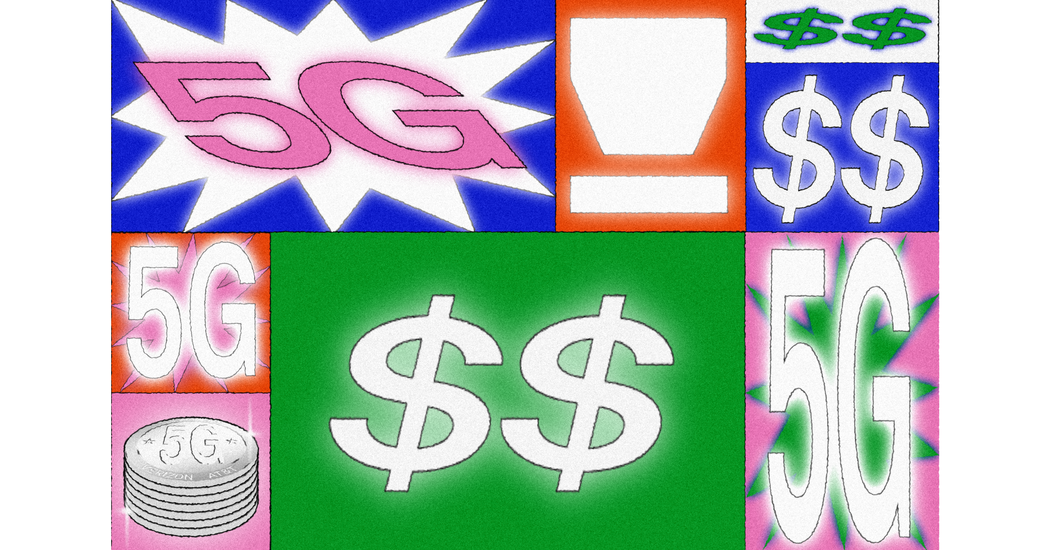 I find it helpful to look for the profit motives behind what’s happening in our shopping lives.

So why does it feel as if every other commercial you see on TV or online is a phone company blaring “5G! 5G! 5G!” into your ear holes? Because each once-in-a-decade changeover in wireless technology is a shot for companies like Verizon, AT&T and T-Mobile to pad our cellphone bills without us going nuts and to steal customers from one another.

That’s not necessarily bad for us, but it does mean that the next time you’re buying a new phone or staring at a marketing message from a phone company, you should watch your wallet. You want to make sure you’re making a purchase that is good for you, and not just good for the phone company’s bottom line.

I wrote last week that America’s phone companies are overselling the current abilities of 5G, the next generation of wireless technology. My colleague Brian X. Chen has detailed how the reality of 5G coverage differs from the hype: Most of what exists now is not much of an advancement.

Yes, 5G will eventually make our phones zippier and usher in new technologies we couldn’t have imagined. Just not now. This means you do not necessarily need it right now.

(Readers outside the United States: This advice may not apply to you. Some other countries’ 5G networks are further along or less of a mess. I’ll discuss places where 5G is working well in an upcoming newsletter.)

But right now is a very real opportunity for phone companies. Americans who are buying new, 5G-ready smartphones — like the latest crop of iPhone models — are often directed to the phone companies’ pricier service plans.

Those plans — including those with “unlimited” use of internet data — are great for many households, but they’re expensive and inflexible for others. (It’s more accurate to call them “unlimited” with the air quotes because they don’t exactly provide unlimited use of phone data.)

To be fair, the phone companies are spending a fortune to upgrade the country’s wireless networks to 5G. And it’s understandable that they’re trying to recoup their costs.

But that’s not the only thing happening here. What Americans pay for their smartphone service plans hasn’t budged for awhile, and the phone companies are trying to reverse that by giving us a reason to pay more.

The most important factors in a phone company making money on smartphone service are getting customers to stick with the company for a long time, and getting them to pay more each month. The shift to 5G is a shot to do both.

Phone companies’ profit motives can help us get a good deal. But I find it helpful to repeat a line from Brian in a column last year. “Telecommunications is one of the world’s most lucrative industries, and wireless carriers will turn a profit no matter what,” he wrote. “You can’t beat the house.”

Read this before buying a new smartphone

In last week’s newsletter about why 5G is still the pits in the United States, a number of readers asked: If they’re buying a new smartphone in any case, should they go for one that is capable of operating on 5G cellphone networks? (Phones must have specialized parts to connect to 5G phone networks, so older phones aren’t capable of getting 5G.)

Short answer: Even if you’re getting a new smartphone now, it probably makes sense to go for a slightly older model that doesn’t support 5G. Save your money. Buy more cookies instead.

One of the questions came from Elizabeth Schultz in Manchester, N.J. She has a seven-year-old iPhone, and is debating buying a new $400 iPhone SE or one of the just released iPhone 12 models at $700 and up.

The iPhone SE isn’t capable of connecting to 5G cellphone networks, and Elizabeth is worried that AT&T, her current phone company, might make 4G networks obsolete in a few years if she goes for that one.

“Dogo Argentino” is not the corny name of a fictional pet detective but a real and adorable dog breed that will start competing in the Westminster Dog Show.

Hooray (Mostly) for the Government!