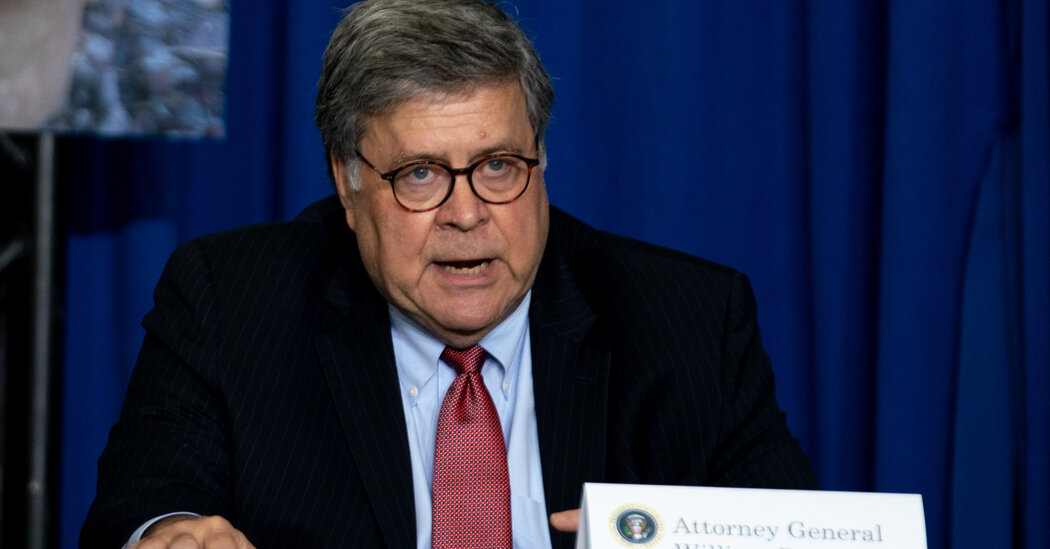 When the top federal prosecutor in Washington recently accused the local police of arresting protesters without probable cause, Attorney General William P. Barr stepped in.

Mr. Barr, who has frequently voiced his support for police officers, brought in the U.S. attorney, Michael Sherwin, to meet with the chief of the Washington police and other top law enforcement officials, escalating the local dispute to the top of the Justice Department.

The meeting grew heated, but ultimately, Mr. Sherwin backed down, according to three people familiar with the encounter.

The episode was an example of Mr. Barr’s approach to running the Justice Department under President Trump: an agenda that is squarely in line not only with the White House but also with the Trump campaign’s law-and-order platform and assertions that Democrats have made the United States less safe. Critics argued that the department’s norm of independence from politics, widely seen as an anticorruption measure that grew out of the post-Watergate era, was at risk.

Mr. Barr has threatened legal action against Democratic leaders who sparred with the president over stay-at-home orders during the pandemic and echoed Mr. Trump’s accusation that they were not tough enough on protesters during nationwide unrest over race and policing. He led federal agents who patrolled the streets of Washington against the wishes of the mayor. And this week, the Justice Department seemed to play into the president’s efforts to undermine voting by mail, making an unusual disclosure about an investigation into nine discarded military mail-in ballots in Pennsylvania.

Under Mr. Barr, the Justice Department is as close as it has been to the White House in a half-century, historians said. Not since John N. Mitchell steered the Nixon re-election effort from the fifth floor of the Justice Department has an attorney general wielded the power of the office to so bluntly serve a presidential campaign, they said.

“The norm has been that attorneys general try to keep the reputation of the department bright and shiny as a nonpartisan legitimate arm of the government that needs to be trusted by everyone,” said Andrew Rudalevige, a history professor at Bowdoin College who studies the power of the presidency.

A Justice Department spokeswoman declined to comment. Mr. Barr’s defenders said he was simply applying his own judgment and any benefit to Mr. Trump’s campaign was incidental.

On Biden’s to-do list: Blunt the talk that he enters the presidency as a lame duck

Oleandrin, Covid-19 Treatment Pitched to Trump, Could Be Dangerous

What if QAnon Is the New Tea Party?