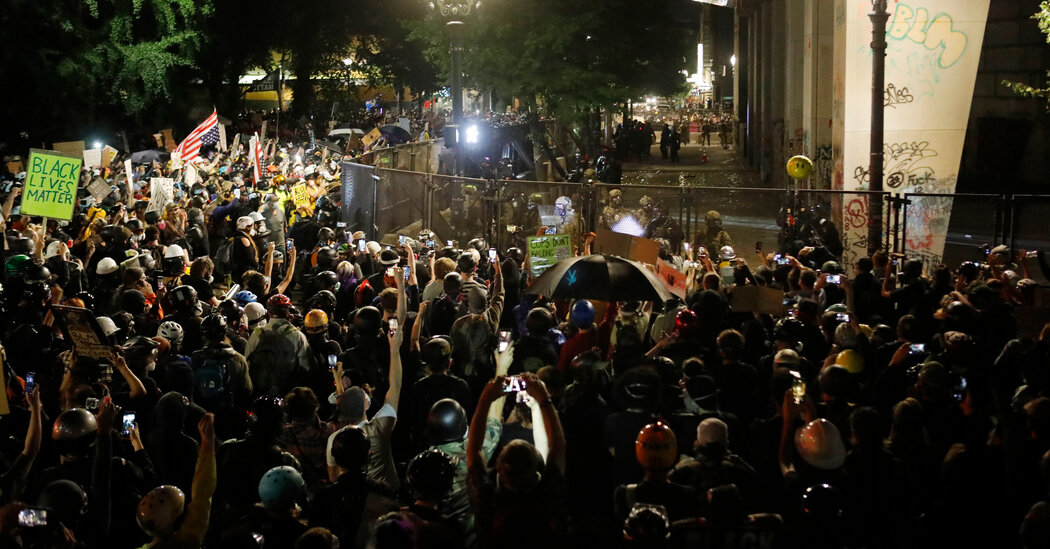 WASHINGTON — Department of Homeland Security officers considered extracting data from cellphones seized from protesters in Portland, Ore., which would have been a remarkable violation of privacy and the right to peaceable assembly, House Democrats said Friday.

Lawmakers on the Intelligence Committee called a hearing on Friday to examine the allegations of Brian Murphy, the former chief of the department’s Office of Intelligence and Analysis, who has accused department leaders of suppressing intelligence warnings of violent white supremacy and Russian election interference.

But Representative Adam B. Schiff of California, the chairman of the committee, opened the hearing by revealing that it had found that homeland security intelligence analysts were sent to Portland and questioned demonstrators. The Federal Protective Service, the homeland security agency that protects federal property, requested that the analysts “extract data” from phones seized from the protesters without a search warrant, a request that went unfulfilled, Mr. Schiff said.

Joseph B. Maher, homeland security’s acting intelligence chief, indicated that he had heard of the gathering effort, although he could not recall who in the agency had told him.

He said the Department of Homeland Security’s inspector general was investigating.

Mr. Maher testified for the first time since his predecessor, Mr. Murphy, filed a whistle-blower complaint claiming department leadership blocked the release of intelligence warnings of violent racist extremists and Russia’s efforts to denigrate Joseph R. Biden Jr., the Democratic candidate for president. Despite Mr. Trump’s attempts to play down Russian influence, Mr. Maher joined a chorus of administration officials, including the F.B.I. director, Christopher A. Wray, in confirming the threat.

“Yes,” said Mr. Maher, who assumed oversight of the intelligence office in August.

The intelligence branch of the Department of Homeland Security has come under fire over its efforts to gather information on protesters in Portland and the journalists covering the unrest. Mr. Murphy’s allegations that senior leadership of the department tried to distort assessments of threats facing the country has fueled criticism that an agency built to coordinate the federal government’s response to national emergencies has instead bent perceptions of those threats to the political whims of the president.

The intelligence committee has investigated the Department of Homeland Security since it dispatched tactical teams over the summer to face protesters outside a federal courthouse in downtown Portland.

A central duty of the intelligence office is to gather data from the various federal agencies, as well as publicly available sources, and include it in unclassified intelligence bulletins used to inform state and local law enforcement agencies of emerging national security threats.

The Department of Homeland Security did not approve the request to glean data from protesters’ cellphones, but Democrats expressed concern.

“This is a situation where an element of the United States intelligence community, not law enforcement personnel, is being asked to use tools meant to counter terrorism or national security threats, not Americans who are exercising their constitutional rights,” said Representative Jim Himes, Democrat of Connecticut.

Mr. Maher took over the intelligence office after Chad F. Wolf, the acting secretary of the department, demoted Mr. Murphy, whose analysts included the Twitter posts of journalists covering Portland, including those of a New York Times reporter, in intelligence bulletins that were distributed to law enforcement officers across the United States.

Mr. Murphy has said the demotion was retaliation for filing complaints with the inspector general of the Department of Homeland Security.

Mr. Maher said including information on the journalists was “not an appropriate production of an intelligence report.” Mr. Maher also revealed the agency began a review of intelligence disseminated since May and found “there were a number of other reports that were issued that shouldn’t have been issued.”

“I don’t think they were about journalists,” Mr. Maher said, adding only that they were “not appropriate under intelligence tradecraft.”

The Department of Homeland Security did not respond to inquiries about the bulletins in question or any of the testimony heard Friday.

The other journalist who was included in the intelligence bulletins is the editor in chief of Lawfare, Benjamin Wittes, who tweeted an email from Mr. Murphy directing officers to begin referring to individuals attacking federal facilities in Portland as “VIOLENT ANTIFA ANARCHISTS.”

Asked whether he was aware of any politicizing of intelligence in the office, Mr. Maher pointed to that message from Mr. Murphy.

The Department of Homeland Security has also cast Mr. Murphy, a former F.B.I. agent, as an unreliable source of whistle-blower information. The agency sent a letter last month to the House Intelligence Committee quoting an email of Mr. Murphy’s that stated that “the acting secretary has never given me any direction on what to do regarding threats.”

Democrats and Republicans on the committee spent much of the hearing arguing over the time it had taken to clear Mr. Murphy’s lawyers to sit in on his closed-door testimony with the committee, which will include classified information. Mr. Maher said the department was expediting the process, which has taken weeks.

Mark Zaid, Mr. Murphy’s lawyer, said the department was slow-walking the process. He said he had received clearance to listen to previous testimonies and the agency could issue him a waiver.

“Mr. Murphy remains committed to providing relevant classified information to the appropriate oversight entities, including Congress, to support his lawful whistle-blower complaint,” Mr. Zaid said. “As soon as his legal team can be cleared in order to provide effective representation, we are immediately prepared to ensure proper oversight happens.”

Mr. Murphy has also accused the Department of Homeland Security of withholding the release of an assessment of threats facing the country that was finished in March. A September draft of the assessment obtained by The Times showed analysts affirmed that white supremacist extremists “will remain the most persistent and lethal threat in the homeland through 2021.” It also singled out Russia as the “primary covert influence actor and purveyor of disinformation and misinformation.”

In September, the department committed to publicly releasing the report on Thursday. Seven months after Mr. Murphy said it was completed, it still has not been distributed.

“The homeland threat assessment is forthcoming — there is no statutory deadline for the product,” said Chase Jennings, a spokesman for the agency.

The Democratic contenders pledge a path forward out of crises.