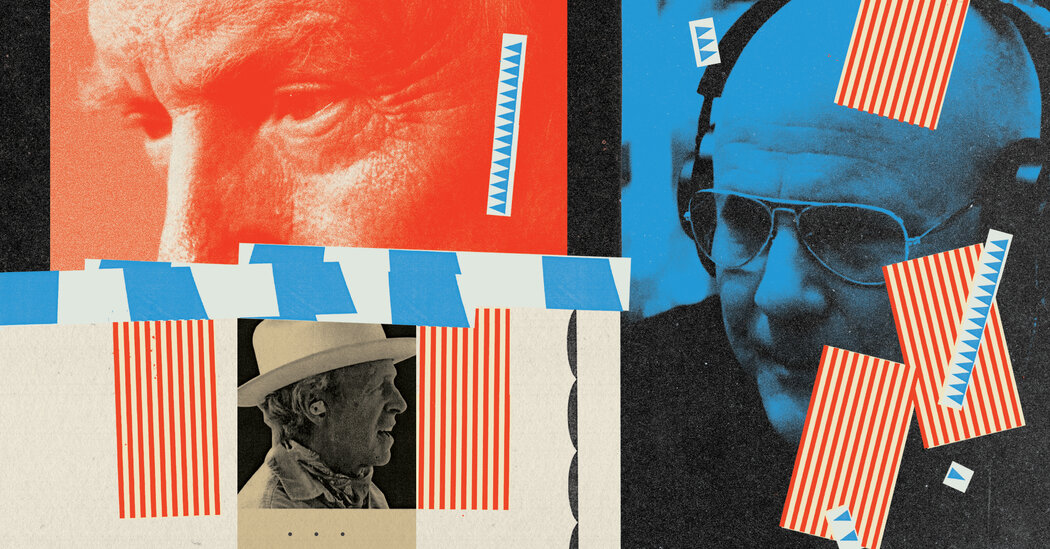 “I miss you guys,” John Heilemann says. He is sitting in the desolate courtyard of a Brooklyn pizzeria with three slices on his table, talking by phone with the other hosts of Showtime’s weekly political documentary “The Circus.” In a normal election year, Heilemann, Mark McKinnon, Jennifer Palmieri and Alex Wagner would be together in some swing state, just back from a campaign rally, hanging out in a dimly lit restaurant and dissecting each candidate’s strategy over a meal and some booze. But the pandemic has all but erased that campaign trail, and so the group is meeting virtually: Heilemann from the pizza parlor, McKinnon from an empty Denver brewpub, Palmieri from a Hudson Valley coffee shop and Wagner from a goat farm. “It sucks not to be having a round-table with the round-tablers,” Heilemann laments.

Still, the show must go on — and so the team dives in. It’s August, and Joe Biden is days away from choosing his running mate, a decision McKinnon predicts will be “tectonic.” Biden has pledged to pick a woman, but Wagner notes that the previous two female picks — Geraldine Ferraro and Sarah Palin — were “Hail Mary” selections by trailing candidates. “This could play badly for Biden,” she warns. When Biden chooses Kamala Harris, Heilemann heads to a mostly empty Delaware high school gym for the ticket’s first joint appearance. “This has been a flawlessly executed and, in most respects, totally normal vice-presidential rollout,” he concludes, “until this event. There’s no applause. There’s no energy in the room.” McKinnon travels to Iowa for a Trump rally, where Mike Pence tells the crowd that Harris once supported dietary guidelines that would reduce Americans’ consumption of red meat. (“We’re not gonna let Joe Biden and Kamala Harris cut America’s meat!”) “That,” McKinnon sagely notes, “is a little preview there of the attacks.”

Two months later, the optics and stage-managing of the Harris selection are forgotten, but the 30 minutes “The Circus” spent obsessing over them serve as a useful reminder of how political reporters have tried, and often failed, to craft conventional narratives out of this decidedly unconventional election. The race has featured, in just the past few weeks, Donald Trump’s taped remarks to Bob Woodward (admitting he downplayed the seriousness of the pandemic), the death of Ruth Bader Ginsburg, the revelation of Trump’s income taxes and Trump’s becoming infected with the virus. By early October, the pressing questions for reporters didn’t involve the results of polls, but of Covid and blood-oxygen tests. The standard models of campaign reporting didn’t seem up to the task of explaining the race. And nowhere is that more evident than in a show like “The Circus.”

The Showtime series premiered during the 2016 campaign. It was originally hosted by McKinnon, Heilemann and Mark Halperin, following on the success of Heilemann’s and Halperin’s books about the previous two presidential elections, “Game Change” and “Double Down.” Halperin, who in 2017 was accused of sexual misconduct, has been disappeared from the show, but “The Circus” still shares the approach and the ethos of those books.

For one, there’s the obsession with food. The acknowledgments in “Double Down” thanked more than 20 chefs and restaurateurs — Batali, Chang, Meyer — who “attended magnificently to our corporeal sustenance.” On “The Circus,” a typical prepandemic episode began with gorgeous, slow-motion shots of scallops being sautéed or chicken being deep-fried, before cutting to the team talking politics at their table. “Did they catch all the seafood in the ocean?” McKinnon marveled as waiters in Portsmouth, N.H., delivered an obscenely tall shellfish tower. “The Circus” has tried to keep up this prandial tradition in pandemic times, but the results feel awkward. Heilemann eats and talks in an eerily empty Gramercy Tavern. A waiter nervously asks Wagner, “You’re eating by yourself, right?” When Palmieri checks in from a pub in Kenosha, Wis., she reports that “It’s grim” — she’s talking about the city’s mood, but she could easily be summing up her wan plate of fried seafood.

The most fundamental similarity between “The Circus” and those books, though, is their cynical treatment of politics as a game, one played by savvy operators who manipulate the public into voting the way they want. Elections, in this view, are won and lost by campaign strategists, who use the news cycle to build narratives that benefit their candidates or, more likely, hurt their opponents. Political reporters, wise to the strategists’ tricks, reinforce or reject their efforts. And it is the resulting media moments — like Sarah Palin’s disastrous “60 Minutes” interview in 2008, or Mitt Romney’s 47-percent video in 2012 — that decide elections.

But in a 2020 race devoid of such theater, the backstage maneuvering doesn’t feel terribly consequential. One campaign’s strategy is to keep the candidate largely hidden away, for public health (but also political) reasons. The other’s chief strategist is the candidate himself, who constantly broadcasts his thoughts and intentions on Twitter and Fox News.

Granted, the strategists still believe they are pulling the strings. The Trump adviser Kellyanne Conway, talking to Palmieri, lapses into the third person: “When the history books are written and they say Kellyanne was the first woman in history to successfully manage a U.S. presidential campaign … ” — as if her role in the 2016 race will merit even a footnote. When Heilemann marvels to Kate Bedingfield, Biden’s communications director, “Who knew that the basement strategy would be a winning strategy?” she replies, “Well, we did, John.”

The journalists, though, seem to glean that their roles have been diminished. “The Circus” used to depict its hosts as insiders at the center of the action: Its signature look, reminiscent of a third-person shooter video game, had them filmed from behind as they wove through the crowded halls of Congress or a civic-center campaign rally. Now Heilemann is seen from a distance, wandering forlornly through a parking lot at a “drive-in” Biden rally, or standing outside the candidate’s house, telling the camera that “down at the end of that driveway, Joe Biden’s making history.”

The subtitle of “The Circus” is “Inside the Craziest Political Campaign on Earth.” But this campaign is not crazy in the way political reporters are accustomed to. They are not crisscrossing the country, chasing candidates who tell huge crowds this is the most important election of their lifetimes. There’s little travel, fewer expense-account meals and none of the usual silliness on which a certain genre of political reporting depends. And yet voters don’t appear to need narratives or optics or even debates to care about the race; interest in the election is so great that experts are predicting the largest turnout since 1908. The news is too saturated with actual momentous happenings for manufactured momentousness to create much of an impression. That makes the traditional narrative chess match of strategists and journalists seem not only irrelevant but juvenile. Voters know in their bones how important this election is. They won’t be distracted by bread — or shellfish towers — and circuses.

Breaking Down the Biggest Moments of Trump’s Speech