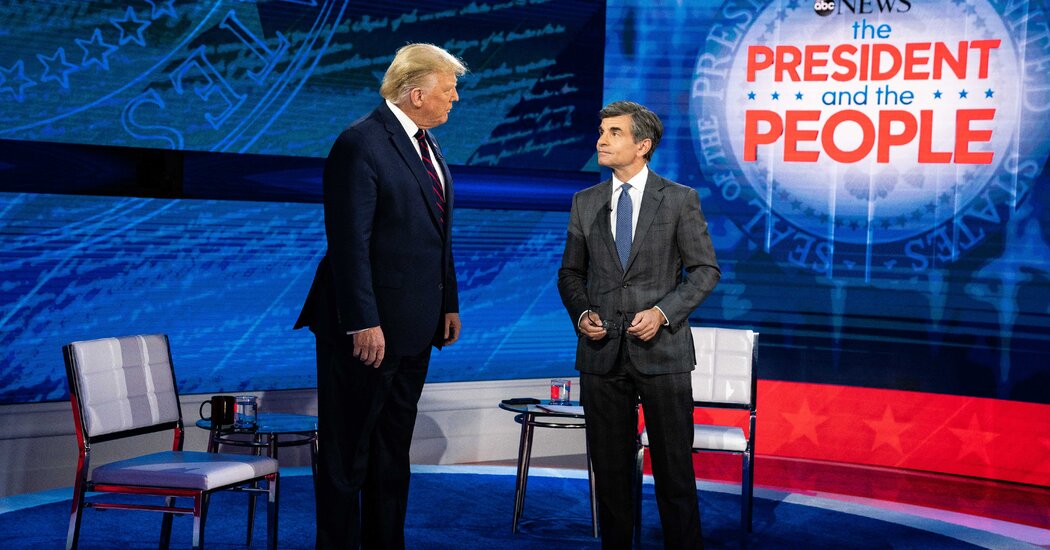 WASHINGTON — President Trump denied on Tuesday that he downplayed the threat of the coronavirus that has taken more than 195,000 lives in the United States, directly contradicting his own recorded words in which he admitted doing exactly that. And then he proceeded to downplay the pandemic even further.

Appearing at a town-hall-style event in Philadelphia, Mr. Trump presented a view of the pandemic radically at odds with the view of public health officials, insisting again that the virus would disappear on its own and contending that “we’re rounding the corner” of the crisis. He cast doubt on the value of wearing masks, citing the wisdom of restaurant waiters over the counsel of his own medical advisers.

“I feel that we’ve done a tremendous job, actually,” Mr. Trump said, defending his handling of the pandemic during the event broadcast on ABC News. “It’s something that I don’t think has been recognized like it should.”

But the president disputed himself by claiming that he did not publicly diminish the severity of the virus. “I didn’t downplay it,” he told the host, George Stephanopoulos. “I actually, in many ways, up-played it in action.”

In March, however, he told the journalist Bob Woodward exactly the opposite, admitting in private that the virus was “deadly stuff” even as he was telling the public that it was akin to the average flu. “I wanted to always play it down,” he told Mr. Woodward in a recorded conversation that was made public in recent days. “I still like playing it down, because I don’t want to create a panic.”

Herd immunity (not mentality) depends on enough people getting sick that a broad immunity is developed against the virus, but experts said it would result in many more deaths. By one estimate, 200 million Americans would have to get infected and recover to halt the epidemic. Nonetheless, the president predicted that the pandemic was already nearing an end. “I really believe we’re rounding the corner and I believe that strongly,” he said.

Mr. Trump’s answers were strikingly out of sync with public health experts, including Dr. Anthony S. Fauci, the government’s top infectious disease specialist, who has warned that the pandemic remains a serious threat to Americans and that life may not get back to a semblance of normal until late 2021.

Andrew Bates, a spokesman for former Vice President Joseph R. Biden Jr., the Democratic presidential challenger, said during the broadcast of the ABC forum on Tuesday night that Mr. Trump was profoundly out of touch. “We need a president who lives not just in our country, but on our planet,” he wrote on Twitter.

The president’s 90-minute appearance was one of the few instances during this campaign season when he has faced voters who were not already his committed supporters and a rare open-ended encounter on a network other than on his favorite, Fox News. From the start of the event in the National Constitution Center in Philadelphia, he seemed defensive about his handling of the coronavirus and sought to change the subject to more comfortable terrain.

Some of the undecided voters in the hall, who were kept far apart in the interest of social distancing, challenged him on his positions not just on the virus but also on health care more generally as well as on racial injustice, immigration and aid to those who have lost jobs during the pandemic.

Even as he appeared sensitive about criticism, Mr. Trump seemed intent on not pushing back against the voters who questioned him in the same abrasive way that he does with journalists and politicians who challenge him. When a woman objected to his interruptions and asked him to let her finish her question, he deferentially fell silent.

But he made clear there was only so far he is willing to go. Mr. Trump rebuffed a man who voted for him last time and asked him to be more unifying. “Sometimes you don’t have time to be totally, as you would say, presidential,” the president said.

As he often does, though, Mr. Trump repeatedly made false statements. He claimed to have fired Defense Secretary Jim Mattis, when actually Mr. Mattis resigned under protest. He claimed that “stocks are owned by everybody,” when in fact only about half of Americans have investments in the market. He claimed to have “tremendous African-American support,” when polls show it is in the single digits. He claimed that Winston Churchill misled Londoners during the Blitz in World War II by telling them “you’re going to be safe,” when in fact the British prime minister famously leveled with the public about the ordeal they were facing.

Asked about the shootings or deaths of Black Americans at the hands of the police, Mr. Trump called them “tragic,” but he then quickly shifted gears to defend law enforcement officers, praising them as “phenomenal” and arguing that they should not be restrained the way critics are advocating.

But some of the most intense exchanges centered on the pandemic that has now killed close to twice as many Americans as the wars in Vietnam, Korea, Iraq and Afghanistan combined, shuttered many businesses, put millions out of work, kept tens of millions of school children home this fall and devastated families across the country. With just seven weeks until the Nov. 3 election, the virus is one of Mr. Trump’s biggest political vulnerabilities, with just 35 percent of Americans approving of his handling of it in a poll released this week by ABC and Ipsos.

One man at the Tuesday night forum, who described himself as “conservative, pro-life and diabetic” and said he cast a ballot for Mr. Trump four years ago, pressed the president about his decision to reopen American society last spring before the outbreak was under control, leading to a resurgence of infections and deaths in the next months.

“I thought you were doing a good job with the pandemic response until about May 1,” the voter told Mr. Trump. “Then you took your foot off the gas pedal. Why did you throw vulnerable people like me under the bus?”

“Well, we really didn’t,” the president replied, pointing to efforts by the administration to provide medical equipment like ventilators and to develop treatments and a vaccine. “We’re starting to get very good marks.”

Asked by Mr. Stephanopoulos why he initially praised President Xi Jinping of China for his handling of the virus while he now blames the Chinese leader, Mr. Trump suggested that he soft-pedaled any criticism at first in order to preserve a new economic agreement. “We just finished a trade deal,” he explained. Then he indicated that it was because he was not knowledgeable at the time about the dangers of the virus. “So I didn’t say anything bad about President Xi initially, because nobody knew much about the disease,” he said.

The president disparaged the value of masks in stopping the spread of the virus even though public health officials have called it crucial. “A lot of people don’t want to wear masks,” said Mr. Trump, who himself almost never wears one in public. “There are a lot of people who think that masks are not good.”

“Who are these people?” Mr. Stephanopoulos asked.

“I’ll tell you who those people are — waiters,” he said. “They come over and they serve you, and they have a mask. And I saw it the other day where they were serving me, and they’re playing with the mask — I’m not blaming them — I’m just saying what happens. They’re playing with the mask, so the mask is over, and they’re touching it, and then they’re touching the plate. That can’t be good.”

Final Report on Russian Interference and Ties to Trump Is Released by G.O.P.-Led Senate Panel