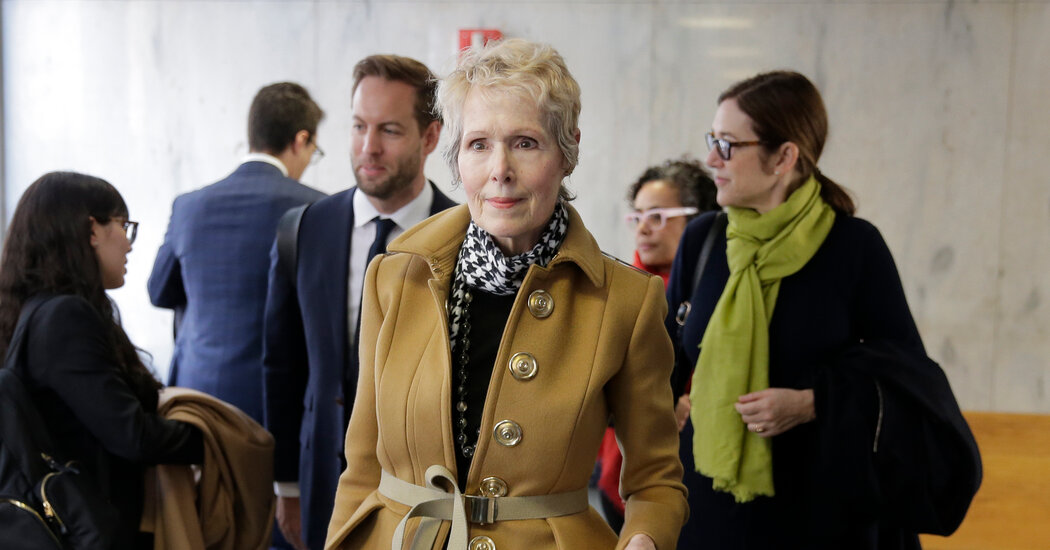 The Justice Department said on Monday that President Trump should not be sued personally for having denied a rape allegation because he made the statement while acting in his official capacity as president.

Lawyers for the government made the argument as they defended Attorney General William P. Barr’s decision to intervene in a defamation lawsuit filed in a New York court against President Trump by E. Jean Carroll, the writer.

Ms. Carroll has said that Mr. Trump raped her in a department store two decades ago and then falsely denied the attack while in office, branding her a liar and harming her reputation.

But Justice Department lawyers say that even though the allegation concerns an incident that occurred decades before Mr. Trump became president, his denial was still an official act because he “addressed matters relating to his fitness for office as part of an official White House response to press inquiries.”

“Given the president’s position in our constitutional structure, his role in communicating with the public is especially significant,” the Justice Department wrote, adding, “The president’s statements fall within the scope of his employment for multiple reasons.”

On Sept. 8, the Justice Department took the highly unusual step of seeking to intervene on Mr. Trump’s behalf even though the lawsuit concerns a claim of defamation stemming from an event that allegedly occurred in the 1990s, long before Mr. Trump became president.

Using a law designed to protect federal employees from defamation suits when they perform their duties, Mr. Barr sought to transfer the lawsuit from state court to Federal District Court in Manhattan and to substitute the federal government for Mr. Trump as the defendant.

That maneuver, if approved by a judge, would have the practical effect of dismissing Ms. Carroll’s lawsuit because government employees enjoy immunity from most defamation claims.

Earlier this month, Ms. Carroll’s lawyers attacked the effort in court papers, asking a federal judge, Lewis A. Kaplan, to reject it.

“There is not a single person in the United States — not the president and not anyone else — whose job description includes slandering women they sexually assaulted,” Ms. Carroll’s lawyers wrote.

In its filing on Monday, however, the Justice Department argued that Mr. Trump had not slandered Ms. Carroll but merely rebutted her allegations. That fell within the scope of his official role as president, the department said, because a claim of rape — even a false one — could have an impact on his job.

Ms. Carroll’s allegations “sought to call into question the president’s fitness for office and a response was necessary for the president to effectively govern,” the Justice Department said. “The president’s challenged statements were directly relevant to his role as president and leader of the executive branch.”

The controversy over the case even arose during a presidential campaign event last week, when the Democratic candidate, Joseph R. Biden Jr., alluded to it, among other examples, to accuse Mr. Trump of treating the Justice Department “as if it’s your own law firm.”

“‘I’m being sued because a woman’s accusing me of rape. Represent me. Represent me,’” Mr. Biden said sarcastically, as if speaking in the president’s voice, adding, “What’s that all about?”

A day after the requested transfer of the case, Mr. Barr told reporters in Chicago that it was routine to substitute the government as the defendant in lawsuits against federal officials and that the action was taken at the White House’s request.

“The law is clear,” Mr. Barr said. “It is done frequently. And the little tempest that’s going on is largely because of the bizarre political environment in which we live.”

In their court papers attacking the government’s move, Ms. Carroll’s lawyers, Roberta A. Kaplan and Joshua Matz, acknowledged that while it may be typical for the government to take the place of low-level federal employees like letter carriers when they are sued, it was not normal to do so for the president.

Ms. Carroll, a longtime advice columnist for Elle magazine, wrote in a book published last year and in excerpts in New York magazine that Mr. Trump attacked her in a dressing room in the luxury Manhattan department store Bergdorf Goodman in the mid-1990s.

According to Ms. Carroll’s account, Mr. Trump had stopped her and said, “Hey, you’re that advice lady!”

She claimed Mr. Trump threw her against a wall, pulled down her tights, opened his pants and raped her.

In response, Mr. Trump denied that he had ever met Ms. Carroll and accused her of lying, adding, “She’s not my type.” In a written statement, Mr. Trump also said Ms. Carroll was “trying to sell a new book.”

He added, “It should be sold in the fiction section.”

The defamation suit is a legal tactic that at least one other woman, Summer Zervos, a former contestant on “The Apprentice,” Mr. Trump’s reality television show, has adopted in an effort to force the president to give a sworn deposition about her allegation that she was sexually harassed. Several women accused Mr. Trump of sexual harassment and assault during the 2016 election; he denied all the allegations, calling them liars.

In the Carroll lawsuit, Mr. Trump, initially represented by private lawyers, tried to delay the case on grounds that as a sitting president, he was immune to civil lawsuits in state court.

But in August, a New York State judge, Verna L. Saunders, denied his request. She cited a ruling by the United States Supreme Court this summer, which rejected a claim by Mr. Trump that, as president, he was immune from a state criminal investigation. That dispute arose after the Manhattan district attorney’s office subpoenaed Mr. Trump’s accountants for his tax returns.

The judge’s ruling meant that Mr. Trump would have to provide a DNA sample, as requested by Ms. Carroll’s lawyers, to determine whether it matched material on the dress Ms. Carroll said she was wearing during the encounter.

Barrett, with children in tow, is seen leaving her Indiana home.

A 4th Presidential Debate? Commission Says No to Trump