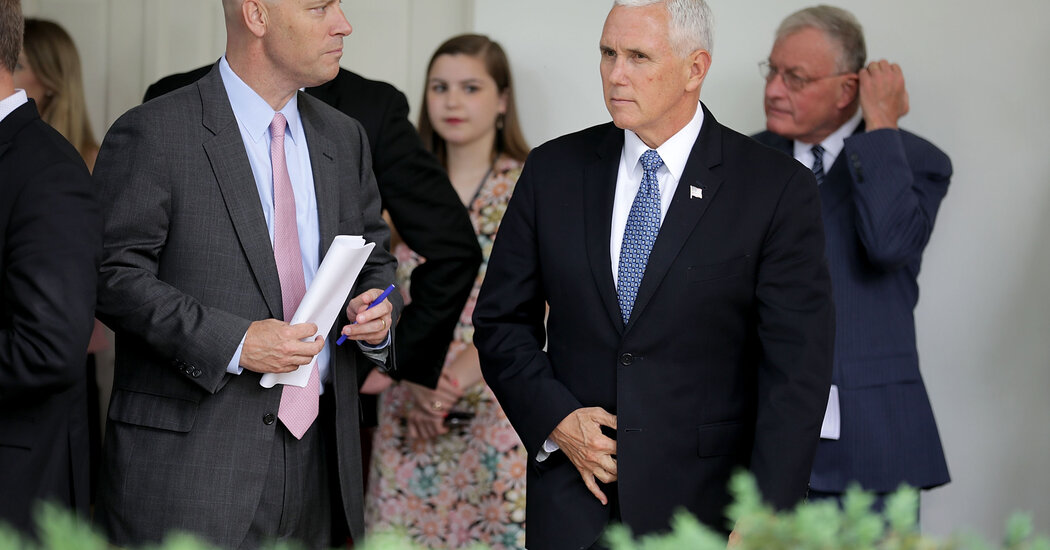 Several members of Vice President Mike Pence’s inner circle, including at least four members of his staff, have tested positive for the coronavirus in the past few days, people briefed on the matter said, raising new questions about the safety protocols at the White House, where masks are not routinely worn.

Devin O’Malley, a spokesman for Mr. Pence, said that the vice president’s chief of staff, Marc Short, had tested positive. A person briefed on the diagnosis said he received it on Saturday.

The vice president’s office said Mr. Pence and his wife, Karen, both tested negative on Saturday and again on Sunday.

“While Vice President Pence is considered a close contact with Mr. Short, in consultation with the White House Medical Unit, the vice president will maintain his schedule in accordance with the C.D.C. guidelines for essential personnel,” Mr. O’Malley said on Saturday.

The statement did not come from the White House medical unit, but instead from a press aide. Two people briefed on the matter said that the White House chief of staff, Mark Meadows, had sought to keep news of the outbreak from becoming public.

A spokeswoman for Mr. Meadows did not immediately respond to an email seeking comment.

A Trump adviser briefed on the outbreak, who was not authorized to speak publicly, said that Marty Obst, a Pence adviser, also recently tested positive. Mr. Obst’s positive result was earlier in the week. His positive test was first reported by Bloomberg News.

A third person briefed on the developments, who also was not authorized to speak publicly, said that three additional Pence staff members had tested positive. Mr. O’Malley did not immediately respond to a question about others who had tested positive.

The decision by Mr. Pence, who leads the White House Coronavirus Task Force, to continue campaigning is certain to raise new questions about how seriously the White House is taking the risks to their own staff members and the public from the pandemic that has killed more than 224,000 people in the United States. Mr. Short has been among those within the White House who have questioned the extensive lockdowns across the country.

Mr. Trump, the first lady and several aides and advisers tested positive for the virus roughly three weeks ago. Mr. Trump spent three nights at the Walter Reed National Military Medical Center, and he was treated with a cocktail of medicine that included an experimental antibody treatment, as well as the steroid dexamethasone.

Mr. Trump, at rallies over the past two days, has insisted the country is “rounding the turn” on the virus, despite a record high number of single-day cases this past week.

The Macho Appeal of Donald Trump

Biden and Trump Will Debate Six Main Issues. Here’s Where They Stand.