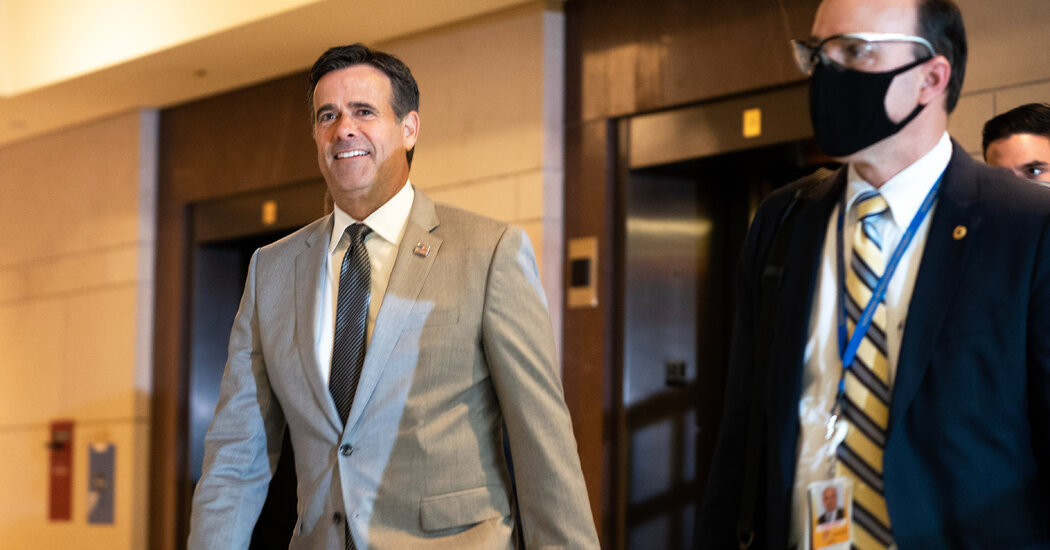 The nation’s top intelligence officials moved on Saturday to tighten control over the flow of sensitive intelligence about foreign threats to November’s election, telling Congress that they would no longer provide in-person briefings about election security and would rely solely on written updates instead.

Representatives from the Office of the Director of National Intelligence informed the House and Senate Intelligence Committees of the policy change by telephone on Friday and followed up with a batch of letters to congressional leaders on Saturday.

“I believe this approach helps ensure, to the maximum extent possible, that the information O.D.N.I. provides the Congress in support of your oversight responsibilities on elections security, foreign malign influence and election interference is not misunderstood nor politicized,” he wrote, according to a copy obtained by The New York Times. “It will also better protect our sources and methods and most sensitive intelligence from additional unauthorized disclosures or misuse.”

But coming just 10 weeks before Election Day, the change drew complaints from lawmakers in both parties who worried the move would block their ability to question and test intelligence assessments from the executive branch at a time when they are crucial to ensuring that foreign powers do not undermine the results. Intelligence agencies have revealed that Russia is again trying to bolster the campaign of President Trump, who has insisted he is actually “the last person Russia wants to see in office” and consistently attacked the intelligence agencies during his time in office.

Democrats, who fear Mr. Trump’s appointees have moved to color intelligence assessments for his political benefit, were particularly furious.

Speaker Nancy Pelosi and Representative Adam B. Schiff of California, the chairman of the House Intelligence Committee, called the new policy “shameful” and said intelligence officials had also canceled briefings with committees and the full House on election security threats already scheduled for September at the request of Mr. Ratcliffe’s office. They vowed to try to force their reinstatement

“This is a shocking abdication of its lawful responsibility to keep the Congress currently informed, and a betrayal of the public’s right to know how foreign powers are trying to subvert our democracy,” the two senior Democrats wrote.

A spokeswoman with the Office of the Director of National Intelligence declined to comment. CNN first reported the change.

Lawmakers far prefer hearing in person from executive branch officials responsible for national security and intelligence. While written briefings can be carefully edited to present the message the agencies want heard, in-person sessions allow lawmakers to ask questions; press for additional information about sources, methods and assumptions involved in drawing up intelligence assessments; and analyze the tone of those briefing them.

Eliminating in-person briefings about intelligence threats to the election could also undermine a key lesson for lawmakers after Russian interference in the 2016 election. This month, the Senate Intelligence Committee concluded its bipartisan, yearslong investigation of the 2016 election and recommended that intelligence agencies release as much information about foreign interference efforts to lawmakers and the public as quickly as possible, to undercut any propaganda and disinformation.

Senator Angus King of Maine, an independent member of the Senate Intelligence Committee who votes with the Democrats, said dry written briefings never had the breadth of information that a full question-and-answer session had.

Mr. King said that the classified information that had been presented to his committee in recent sessions had been protected.

Composed of lawmakers from both parties, the House and Senate intelligence committees are highly secretive bodies that are responsible for overseeing intelligence policies and the operations of the nation’s intelligence agencies. Both panels were expecting additional in-person briefings before Nov. 3.

While details of the new restrictions are murky, in-person briefings to the political campaigns and the Democratic and Republican National Committees are likely to continue, according to a person briefed on the administration’s plans.

The directive appears to apply to all intelligence agencies that report to Mr. Ratcliffe, though not necessarily other entities in the Justice Department, Defense Department and Homeland Security Department that are responsible for election security and that also regularly apprise Congress of their work. An official from Homeland Security’s Cybersecurity and Infrastructure Security Agency, which monitors the security of voting machines, said it would continue to brief Congress.

Still, the distinction may matter little. In May, the Trump administration consolidated election-related congressional briefings under William R. Evanina, the director of the National Counterintelligence and Security Center, who reports to Mr. Ratcliffe.

That change ensured that a single voice speaks for the sprawling intelligence community, but it also effectively sidelined other agencies and officials like the election czar at the Office of the Director of National Intelligence, Shelby Pierson, from doing so. Ms. Pierson was appointed to the post last year, but when she briefed House lawmakers that the Russian government preferred that Mr. Trump was re-elected, it prompted widespread anger among Republicans.

Richard Grenell, Mr. Ratcliffe’s predecessor, praised the move on Saturday, saying he had heard from career intelligence officials that they no longer wanted to brief lawmakers, “because the partial information leaks and manipulation of their words were detrimental to their careers.”

Lawmakers saw it differently. The decision by Mr. Ratcliffe, who once received similar briefings as a Republican lawmaker on the House Intelligence Committee, fanned accusations by Democrats that he had politicized the intelligence community since becoming its director this year.

“Ratcliffe has made clear he’s in the job only to protect Trump from democracy, not democracy from Trump,” said Senator Chuck Schumer of New York, the top Senate Democrat.

They have charged that under Mr. Trump, intelligence briefings to Congress have been tainted by partisan politics, especially this year as the Office of the Director of National Intelligence has pushed to declassify information that conservatives believe is embarrassing to the Obama administration or undercut the F.B.I.’s investigation into Russia’s multipronged election interference efforts in 2016, and possible ties to the Trump campaign.

House Democrats, in particular, have delivered withering criticisms of recent election security briefings from the intelligence agencies, frustrating the top officials responsible for them.

After House members were briefed in late July on threats to the coming election at the request of Democratic leaders, Democrats publicly castigated the administration officials present for withholding what they viewed as crucial information from the American people.

Behind closed doors, Ms. Pelosi had more pointedly accused Mr. Evanina of keeping Americans blind to the true nature of the threats, complaining that a public assessment he issued in late July was too vague to be useful. People familiar with the exchange, which was earlier reported by Politico, confirmed it on Saturday.

An intelligence official at the time defended Mr. Evanina’s briefing and accused Democrats of leaking classified information they were legally obligated to keep private for partisan gain.

But about a week later, Mr. Evanina issued a more detailed statement saying Russia was using a range of tactics to smear Joseph R. Biden Jr., the Democratic nominee for president, in an effort to help Mr. Trump’s campaign. The statement said China preferred Mr. Trump’s defeat and was deciding whether to more actively try to influence the election against a president it considers “unpredictable.” And he noted that Iran was seeking to undermine American democracy, as well, and sow divisions ahead of the election.

On Saturday, Ms. Pelosi and Mr. Schiff accused the Trump administration of promoting “a false narrative” that the three nations pose the same threat.

“Only one country — Russia — is actively undertaking a range of measures to undermine the presidential election and to secure the outcome that the Kremlin sees as best serving its interests,” they wrote.

Kamala Harris Changes the Race While Trump Tells on Himself

In Michigan’s Upper Peninsula, Some Cracks Emerge in the Pro-Trump Wall

DeVos to Be Investigated for Potential Violation of Ethics Law

Will Congress Act on Covid Soon? ‘I’m Not Optimistic’