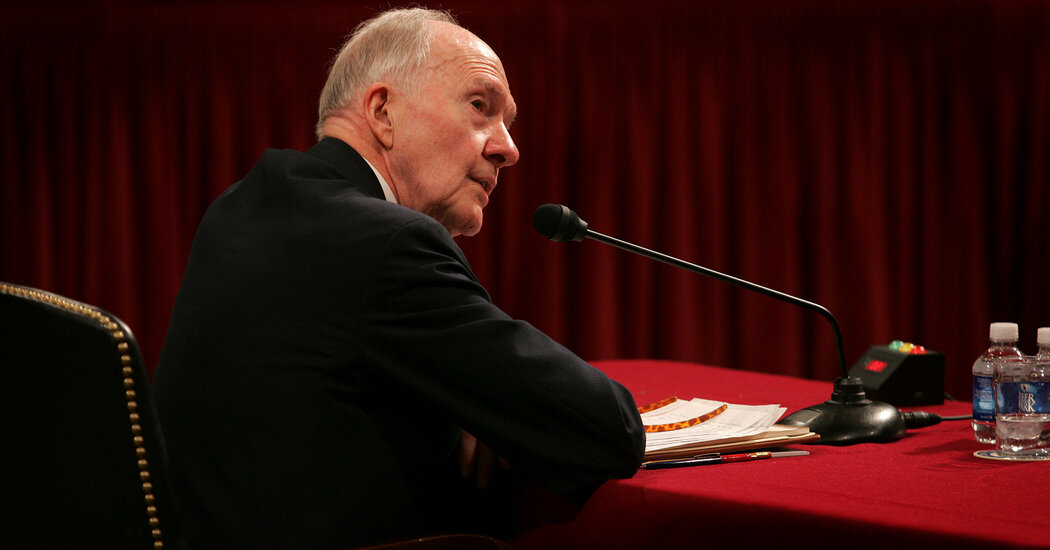 By the time he died last week at age 95, Brent Scowcroft had helped steer the nation through some of the most pivotal events of the modern era. As the much-admired national security adviser to two presidents, he became known as the archetype of a foreign policy steward, the model his successors vowed to emulate, though never as successfully.

Among other things, Mr. Scowcroft said he tried to fire Gen. H. Norman Schwarzkopf, the swaggering, larger-than-life officer who was leading American forces against Iraq, and later tried to rescind a decision that enabled Saddam Hussein to deploy armed helicopters against his own people. He said he wished they had prolonged the war to destroy more Iraqi forces. He also wanted to use force to intervene in the bloodletting in Yugoslavia and opposed pardons for Iran-contra figures.

But one decision he never regretted came to have much resonance later on. Despite pressure in 1991 to continue the Persian Gulf war and drive to Baghdad to topple Mr. Hussein, Mr. Scowcroft told interviewers in 2000 that it was the right decision to end it. Mr. Hussein was contained and pushing him out would have only caused a mess for the United States, he said. Less than three years after the oral history, his fears were realized.

“I have no second thoughts about it,” Mr. Scowcroft said. “At the time, emotionally, would I have liked to do it? You bet. At the time, I didn’t think it was a thing to do. Despite all the criticism of it — ‘Well, Saddam’s still there, we still have the problem’ — I think we did the right thing.”

Had they ousted Mr. Hussein, “the coalition almost certainly would have fractured,” he said. “We would be the occupier of a large country, with no visible way that was apparent to us to disentangle from that kind of development.”

At that time, nine years after the gulf war, he said, “Saddam is a nuisance, he’s a pain in the neck, but as long as we are alert to the problem and keep him from doing what he would otherwise do, which is not an enormous task, he’s not a threat to the region.”

Mr. Scowcroft, who was so close to former President George Bush that they wrote a book together about their time in office, later broke with President George W. Bush over the 2003 invasion of Iraq. But Mr. Scowcroft’s public warning against the second Iraq War cemented his place as a voice of establishment restraint and among the last of his generation’s wise men.

The newly released oral history was conducted for the Miller Center at the University of Virginia as part of its series of interviews with key figures documenting nearly every presidency of recent times. Mr. Scowcroft was interviewed over two days in August 2000 by Philip Zelikow, a former aide on the faculty at the University of Virginia, and James H. McCall of the Bush Presidential Library Foundation, on condition that it not be released until after his death.

An Air Force officer who rose to lieutenant general, Mr. Scowcroft served as Secretary of State Henry Kissinger’s deputy under President Richard M. Nixon and national security adviser to President Gerald R. Ford. But it was his four years at Mr. Bush’s side from 1989 to 1993 that put him at the center of world-shaking events like the gulf war, the reunification of Germany, the fall of the Soviet Union and the end of the Cold War.

Despite his later argument against war in 2003, Mr. Scowcroft was more willing to use force while in office. After Iraq invaded Kuwait in August 1990, he thought his colleagues on the National Security Council were too passive.

“The first N.S.C. meeting after the attack was one that indicated, ‘Well, it’s too bad, but gee — that’s a long way away — how would we get forces there? You know, it’s just kind of too bad, too hard to contemplate,’” he recalled. “There was sort of a fait accompli atmosphere in that first meeting.”

He raised the matter with Mr. Bush on Air Force One. “On the aircraft, I told him I was very disturbed at the tone of the N.S.C. meeting — a sort of throw-up-your-hands tone,” he said.

With Mr. Scowcroft’s prodding, American forces soon headed to the region. By the end of that year, he said in hindsight, war was inevitable, even though Congress had not yet voted, Secretary of State James A. Baker III was still exploring a diplomatic resolution and Gen. Colin L. Powell, the chairman of the Joint Chiefs of Staff, was wary.

“By the time we got 500,000 troops out there, we needed a conflict,” Mr. Scowcroft said. “We couldn’t stand a diplomatic solution. Now, I didn’t articulate that, except to the president. Jim Baker and Colin Powell didn’t agree. But there was no doubt in my mind that by late December — middle of December — we were committed.”

Mr. Scowcroft, however, was no fan of General Schwarzkopf. Expanding on an incident reported in Rick Atkinson’s 1993 book “Crusade,” Mr. Scowcroft said he and Defense Secretary Dick Cheney tried to fire the general because of “these blind rages that he would get in, terrorizing subordinates and so on.”

General Powell saved General Schwarzkopf by sending Lt. Gen. Calvin A.H. Waller to serve as his deputy and calm the situation. “I wanted him replaced,” Mr. Scowcroft said. “Cheney, I think, wanted him replaced. Powell said, ‘No, I’ll be responsible. I will make sure that things work.’”

That would have consequences. Mr. Scowcroft said he and Mr. Bush did not realize that, while General Schwarzkopf had crushed the Iraqi forces, much of Mr. Hussein’s elite Republican Guard was still intact when they called off the war. “Had we known that a considerable part of the Republican Guard had gotten away, I think we probably would have gone another day or so to try to catch them,” he said.

Mr. Scowcroft also expressed regret that the cease-fire arranged by General Schwarzkopf acceded to Mr. Hussein’s request to be allowed to fly helicopters, which he then used to ruthlessly put down a Shiite uprising.

“At that point, I suggested to Cheney and Powell that we tell Schwarzkopf to rescind the helicopter order,” Mr. Scowcroft said. “They both said that would be humiliating to a commander, and so on, and they didn’t want to do it. I did not take it to the president. I think, in retrospect, I should have, but I didn’t.”

Mr. Hussein went on to bomb the marshland villages in southern Iraq and drained the water, turning the region into an uninhabitable desert and driving as many as 300,000 people from their homes.

“One of the things we did contemplate — and I wish we had done — was to give some assistance to the marsh people in the south,” Mr. Scowcroft said. “I would have bombed the dikes and kept the marshes flooded to give them protection.”

Mr. Scowcroft likewise took a hard line on other issues. He contemplated canceling a summit meeting with the Soviet leader Mikhail Gorbachev because of Moscow’s crackdown on Lithuanians seeking independence. “We couldn’t let Gorbachev get away with it,” he said. And he favored bombing Yugoslavia to stop ethnic cleansing, even though he conceded it probably would not have worked. “I worried about the image of us standing by while these horrors were going on,” he said.

Mr. Scowcroft noted that Mr. Bush ignored his opposition to granting postelection pardons to former Defense Secretary Caspar W. Weinberger and other Iran-contra figures. “I thought it made him look bad, that that issue was not his issue, it was Ronald Reagan’s issue, and Ronald Reagan hadn’t granted any pardons. So why should Bush solve Reagan’s problem? That was my view of it — and I lost.”

The oral history includes accounts of other important moments. He said the administration was “split, badly split” over whether to encourage the breakup of the Soviet Union or to try to prop it up to prevent a dangerous fragmentation of a nuclear superpower. He said that Mr. Bush “was way ahead of me on Germany” and disregarded Mr. Scowcroft’s caution about reunifying the country.

He also offered a rare critique of Mr. Bush, albeit one suffused with admiration. Asked about the president’s weaknesses, Mr. Scowcroft said Mr. Bush was too trusting and too generous, making “phenomenally bad choices” in personnel and then sticking with them.

“He’s easy to fool and his loyalty gets in the way of an analytical reading of people,” Mr. Scowcroft said. “Once he gets that loyalty, he’ll stick with it and overlook faults that a president shouldn’t do. A president, I think, has to be something of a butcher. When he sees somebody who’s not doing just right — he doesn’t have to do it, but he has to cut his losses.”

At the same time, he said, it was Mr. Bush’s humanity and his evident emotion that made him so successful. “I think this is one reason why a lot of people who are close to him are very devoted to him.”

Courts will decide if Newsom exceeded his executive power. Californians are judging his hypocrisy