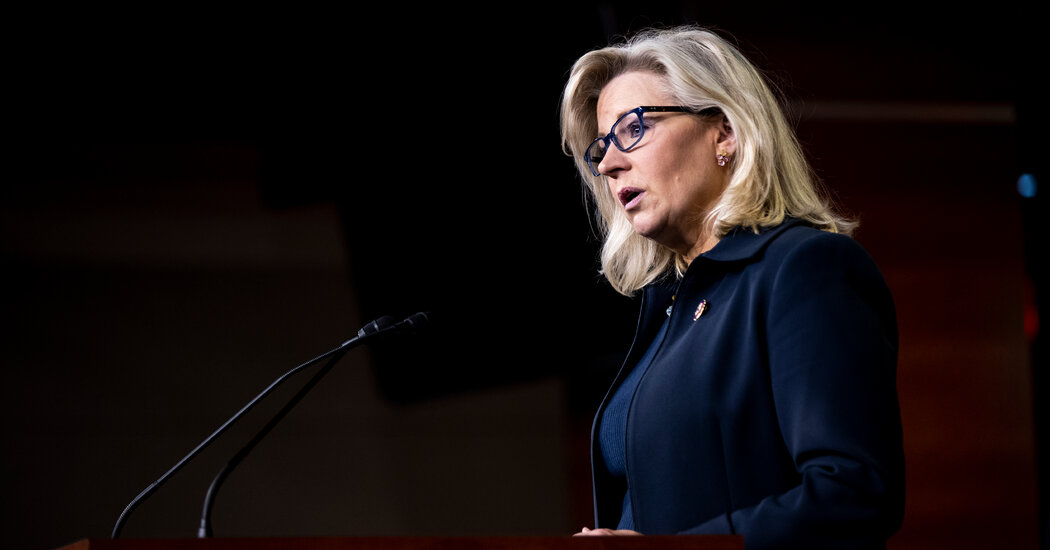 In a Republican Party that prizes total loyalty to President Trump, Representative Liz Cheney of Wyoming, the party’s third-ranking House leader, has managed a tricky balancing act, repeatedly breaking with Mr. Trump without drawing the ire of the right.

But on Tuesday, Ms. Cheney, a staunch conservative, found herself facing the backlash she has long avoided — at the hands of her own colleagues.

In an extraordinary closed-door meeting of House Republicans in an auditorium beneath the Capitol, a group of more than a half-dozen of Mr. Trump’s most loyal supporters took aim squarely at Ms. Cheney.

What began with a complaint from Representative Matt Gaetz of Florida about Ms. Cheney’s recent support for a primary challenger to a sitting House Republican exploded into a full-blown pile-on that included charges that Ms. Cheney was personally hurting Republicans’ chances of retaking the House with her defense of Dr. Anthony S. Fauci, the nation’s top infectious disease expert; her criticism of Mr. Trump’s policies in the Middle East; and other contrarian stances.

At least one lawmaker, Mr. Gaetz, called for her to step down as the chairwoman of the House Republican Conference, the position that has made Ms. Cheney the highest-ranking Republican woman in Washington. And Representative Jim Jordan of Ohio flatly said that Republicans would be better served by a leader who was helping Mr. Trump instead of going after him.

Ms. Cheney, whose own combative partisanship has turned heads in the past, punched back and departed with the apparent support of her fellow Republican leaders. She later defended Dr. Fauci and said she had to do what she thought was right, including helping to re-elect Mr. Trump.

But the ugly familial showdown, which was described by four people in the room and was first reported by Politico, reflected a simmering power struggle and sour mood among Republicans. They are watching their electoral prospects sag ahead of November’s elections and pondering their future in the minority, potentially without Mr. Trump in the White House to define their party. With their hopes of reclaiming the House all but dashed, Republicans are now fighting to avoid shrinking their numbers in that chamber and losing the White House, their majority in the Senate or both — and looking for people to blame.

The fight also highlighted deeper divides within the Republican Party three years into Mr. Trump’s presidency, particularly over foreign policy and the role of money in politics, that have left Ms. Cheney on uneasy ground with the party’s base. To members of the ultraconservative Freedom Caucus, Ms. Cheney is the ultimate avatar for the old Republican establishment: the daughter of a political dynasty who supports an aggressive role for the American military abroad, rubs elbows in the world of big donors and has vocally supported the kind of career nonpartisan government officials leading the coronavirus response that they view as undermining Mr. Trump.

At one point, Representative Ralph Norman of South Carolina tied Ms. Cheney to George W. Bush and his family, who have cold relations with Mr. Trump.

“I’m not a Bush, and I think you know that,” Ms. Cheney snapped back. Her father, Dick Cheney, served as vice president to Mr. Bush.

And many of those who went after Ms. Cheney on Tuesday believe that the 53-year-old scion is trying to position herself as a leader of the Republican Party if Mr. Trump goes down in November.

A former lawyer and State Department official, Ms. Cheney was elected to Congress in 2016, alongside Mr. Trump. Sharp-tongued and unafraid to get into a fight, Ms. Cheney wasted little time in establishing herself as one of Republicans’ most combative brawlers. After her party lost the House majority in 2018, she leapfrogged up the leadership ladder.

Ms. Cheney’s allies brush aside speculation about her future within the party as “palace intrigue” and say her choice to speak in a fashion at times contrary to the president is a matter of “conscience.” Her aides point out that she is still working fervently to re-elect Mr. Trump and retake the House, hosting fund-raisers and serving in a volunteer role on his campaign.

It was not clear whether the attacks on Ms. Cheney were coordinated, but when she opened Republicans’ weekly closed-door meeting for questions, her leadership quickly became the primary topic.

Mr. Gaetz was referring to Ms. Cheney’s decision this year to back a primary challenger to Representative Thomas Massie of Kentucky, a contrarian lawmaker whose libertarian leanings and intense criticisms of Congress have long been loathed by Republican leaders. (Ms. Cheney withdrew her support for the challenger after racist writings came to light, and he lost badly to Mr. Massie in a primary last month.)

Ms. Cheney tried to dismiss the topic but could not help tossing a barb back at Mr. Gaetz, telling him she looked forward to seeing his HBO documentary — a reference to a documentary featuring Mr. Gaetz, Mr. Massie and other members of Congress focused on the influence of corporate money on American political institutions.

Mr. Massie was not satisfied and pressed Ms. Cheney himself.

Ms. Cheney said his had been a “special case” rather than some change in policy, and tried to turn the subject to what she said should be Republicans’ main objective: beating Democrats. But Mr. Massie warned colleagues they could be next, saying that their chairwoman believed the rank and file served her, not the other way around.

The attacks piled on from there.

Representative Chip Roy of Texas, who is battling to hold his seat between San Antonio and Austin, took issue with Ms. Cheney’s vocal support of Dr. Fauci. He noted that his Democratic opponent, Wendy Davis, had shared a tweet that Ms. Cheney sent calling Dr. Fauci “one of the finest public servants we have ever had.”

Republicans were also annoyed that Ms. Cheney had tweeted a picture of her father donning a blue medical mask with the caption “Dick Cheney says WEAR A MASK” — an apparent dig at Mr. Trump’s refusal at the time to wear a mask in public. As if her shot at Mr. Trump was not clear enough, she appended the hashtag “#realmenwearmasks.”

Ms. Cheney told Mr. Roy that the country’s top focus should be defeating the virus, not attacking doctors and scientists who have the best interests of the country in mind.

Representative Andy Biggs of Arizona, the chairman of the Freedom Caucus, stood up and went further, accusing Ms. Cheney of undermining Republicans’ chances of winning back control of the House. If you don’t have anything nice to say about Mr. Trump, he urged, don’t say anything at all.

Mr. Jordan thanked Ms. Cheney for her defense of Mr. Trump during the House impeachment proceedings, but then unloaded about her defense of Dr. Fauci, her broadsides against Mr. Trump’s policy on Afghanistan and Germany, and her skepticism about the administration’s response to intelligence about a possible Russian bounty scheme.

Ms. Cheney did not flinch, saying she looked forward to hearing Mr. Jordan lecture about being a team player when Republicans reclaim the majority. As a Freedom Caucus leader, Mr. Jordan was famously a thorn in the side of successive Republican speakers, marshaling conservative lawmakers against them on issues like spending and immigration.

Ms. Cheney, through a spokesman, declined an interview request.

But at a news conference Tuesday afternoon, she tried to downplay the confrontation as a “healthy exchange of views” and redirect attention to Republicans’ shared objectives.

“There is absolutely no question what is at stake in this election and how much worse off this country would be under a Biden-Schumer-Pelosi regime,” Ms. Cheney said.

She said that she had spoken at length with Mr. Massie to try to smooth things over and that she always sought to live up to “the oath I swore to the Constitution.”

“The debates and the discussions that we have reflect how high the stakes are and how grave the issues are,” she said.