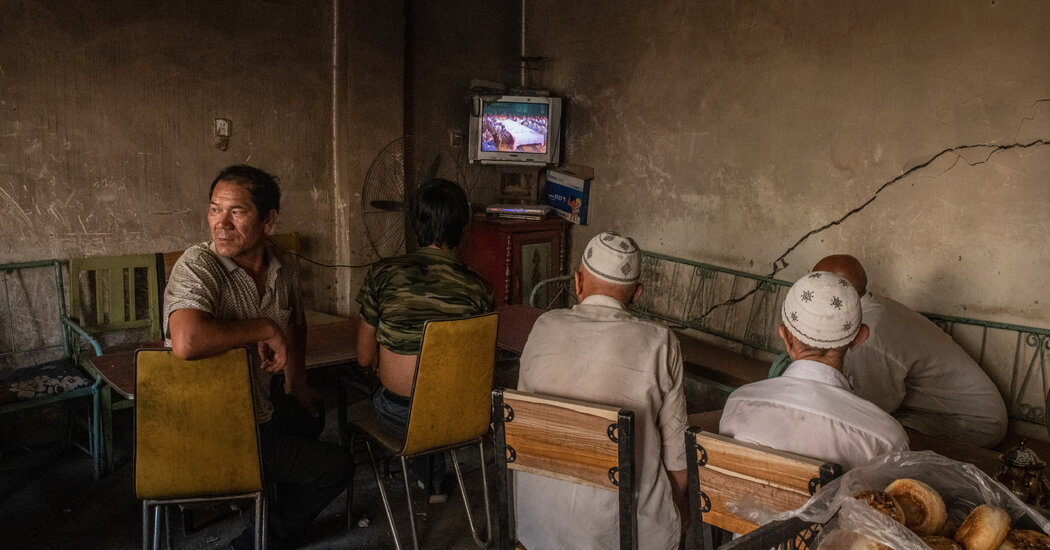 Senate Democrats plan on Thursday to present their most comprehensive strategy yet to confront and compete with China, rolling out sprawling legislation that would provide more than $350 billion over a decade to build the United States’ industrial capacity and challenge Beijing.

The bill, led by Senator Chuck Schumer of New York, the minority leader, and Senator Bob Menendez of New Jersey, the top Democrat on the Foreign Relations Committee, seeks to shore up the nation’s manufacturing capabilities and infrastructure in an attempt to unwind it from China’s economy and increase American firms’ competitiveness.

It comes as relations between Washington and Beijing have spiraled downward, setting the stage for a new era of confrontation, and as President Trump and congressional Republicans, especially in the Senate, have sought to harness Americans’ growing animosity toward China as a political weapon against Democrats.

“America cannot continue to underinvest in our workers, manufacturing communities, science, technological research and trade enforcement or cede our leadership in the international community and expect to confront this threat,” said Mr. Schumer, a longtime China hawk. The legislation, he added, “counteracts the Chinese Communist Party’s predatory trade practices and aggressive military behavior, reinvigorates our alliances and turns the tables by making essential investments in our workers, entrepreneurs and manufacturers.”

Democrats were to announce the plan before a Foreign Relations Committee hearing on countering China.

The legislation focuses heavily on bolstering American research and development in science and technology, authorizing $300 billion over four years for such efforts and investing another roughly $16 billion in the U.S. semiconductor industry to help the United States retain an edge over Beijing. It would also require the president to submit a plan to Congress to use the Defense Production Act to increase domestic production capabilities for semiconductor devices and require domestic sourcing for those products.

The bill also aims to break China’s chokehold on global supply chains, and would require the Pentagon to buy certain items from the United States and so-called friendly nations, rather than China.

Democrats sought to portray their plan as an inherently pro-worker policy, highlighting endorsements from the American Federation of Labor and the United Steelworkers. And they framed it as a sharp contrast to Mr. Trump’s policies.

“Rather than tackling these challenges, President Trump’s policies have rolled out the red carpet for Beijing to reshape international institutions and establish global rules and norms that spread the influence of their authoritarian system,” Mr. Menendez said, adding that the plan would “serve as a launching pad to help our nation emerge from this dark chapter of our history.”

The legislation would provide $125 million in military spending over four years for the Indo-Pacific region. U.S. military officials in April called on Congress to authorize an additional $20.1 billion between 2021 and 2026 to bolster deterrence against China, in a sign that they expect tensions to flare. A Democratic aide said the proposed $125 million was intended to assure that there would be additional funds to strengthen alliances and partnerships and posture in the region.

The bill would also seek to punish Beijing for human rights abuses against the largely Muslim Uighur minority, a measure that lawmakers in both parties have backed in an effort to prod Mr. Trump to take a more aggressive stand. It would require the president, as well as the commerce and Treasury secretaries, to submit reports identifying individuals knowingly engaged in or facilitating forced labor in China and impose sanctions on them, in an effort to crack down on abuses against the Uighurs in the Xinjiang region.

Uighurs and members of other Muslim minority groups in Xinjiang who have suffered persecution would be given refugee status, as would Hong Kong residents at risk of persecution under the Chinese territory’s new national security law.

Several of the measures outlined in the legislation mirror efforts that have already drawn bipartisan support in the Senate. Republican and Democratic lawmakers in the House and Senate, for example, joined up this summer to propose investing tens of billions of dollars in America’s semiconductor industry over the next five to 10 years. Another bipartisan, bicameral group introduced a similar measure this summer that would grant persecuted Hong Kongers refugee status.

But Democrats’ legislation also offers novel initiatives related primarily to the nation’s use of soft power, including a program that would provide funds for a State Department program to “support and train journalists on investigative techniques necessary to ensure public accountability in relation to Chinese influence operations abroad.”

The unusual burst of consensus on Capitol Hill to confront China reflects the urgency felt by lawmakers who are increasingly looking to expansive government intervention to help American firms compete — even among Republicans, who were once reluctant to embrace government-led industrial plans.

Seizing on the coronavirus crisis, Republican China hawks have introduced their own bills — some of them with bipartisan support — intended to punish and challenge China with new sanctions and mandates for domestic manufacturing and controls on American exports.

Inside the Failure: 5 Takeaways on Trump’s Effort to Shift Responsibility