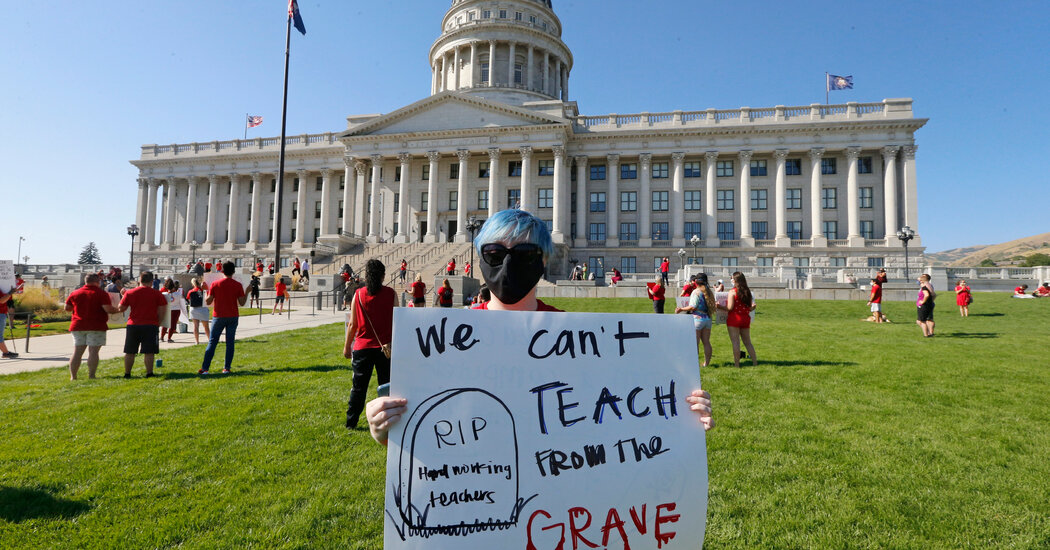 Parents in the United States are anxious and unsure about how to keep their children safe and able to learn during the pandemic school year. But there is a large political divide in how they think about these issues, several new surveys show.

Democrats are more reluctant than Republicans to send their children to school, and are more worried that their families will become infected. Republicans are more likely to believe teachers and children should be back in classrooms this school year, according to a Morning Consult survey for The New York Times of a nationally representative group of 1,081 parents.

Other recent surveys have found similar patterns. Many factors are at play in parents’ approach to the school year, including their jobs; the risk level in their families and communities; and their children’s individual needs. Parents of color and low-income parents say they’re less comfortable with returning children and teachers to school. But over all, political leanings play a large role in parents’ views.

Education wasn’t always such a powerful national political issue. Jeffrey Henig, director of the politics and education program at Teachers College at Columbia, traces the shift back to 1983 and the publication of “A Nation at Risk,” a report calling for education reform, which immediately became a political flash point. The intense polarization of the Trump era has made this worse, he said.

“Increasingly, education has been absorbed into general-purpose politics,” Professor Henig said. “And on this particular issue, and under this particular administration and in a presidential election year, it’s pretty clear that the orientation toward Trump is more powerful than the contextual information about actual levels of risk in your community.”

In July, President Trump placed school reopening squarely in the center of the partisan debate when he called for schools to open in the fall, even without significant federal funding to help them with the added expenses of providing sanitation and physical distancing, and even as Covid-19 cases were rising in many regions.

His stance alienated many teachers and parents, who said he wasn’t doing what was necessary to reopen safely. This seemed to change the political calculus, pushing many school administrators and policymakers to conclude that reopening was unsafe. But it rallied his loyal supporters to the cause, the new data suggests.

In the survey from The Times and Morning Consult, when parents were asked whether they had considered keeping their child home for health and safety reasons, even with the prospect that a school would reopen, just 29 percent of those who approved of the president’s job performance said they had. Nearly half of parents who disapproved of Mr. Trump had considered keeping their children home in such a case.

There was a similar divide when parents were asked whether teachers should be expected to return to school in person — a question that has catalyzed teachers’ unions and in some cases divided teachers, administrators and parents. Over all, one-quarter of parents said teachers should be strongly encouraged to return; two-thirds said they should be able to do their jobs virtually; and the rest weren’t sure.

Republican parents were nearly three times as likely as Democratic ones to say teachers should be considered essential workers who needed to return to school. Thirty-six percent of Republicans said that — Republican men were more likely to express this than women — as did 13 percent of Democrats.

A Brookings analysis found something similar: that politics, more than public health, was driving school districts’ reopening plans. Jon Valant, a senior Brookings fellow studying education policy, analyzed data on district reopening plans from Education Week, as well as data on 2016 election results and Covid-19 infection rates by county. He found no relationship between school districts’ plans and their counties’ infection rates. Instead, there was a strong correlation between a district’s plans and a county’s support for Mr. Trump in 2016.

The data was from July; some schools have since changed plans, and the Education Week database is not comprehensive. Still, the patterns are so strong that politics are clearly playing a role, Mr. Valant wrote.

The latest on how schools are reopening amid the pandemic.

The Pew Research Center found this month that 36 percent of Republicans and those who lean Republican — but just 6 percent of Democrats and Democratic leaners — thought schools in their area should be open for in-person teaching five days a week. People in counties that had been hit hard by the virus were more likely to say school should be online only — but large partisan differences persisted even in these counties, Pew found.

Finally, a survey by Kaiser Family Foundation also found that Democrats were much more likely than Republicans to worry that children or school staff would become infected. Nearly all parents of color said they were worried their child would get sick if they returned to school in the fall, compared with just half of white parents.

When asked if their schools had enough resources to open safely, more than half of Republicans and Republican leaners said yes, but just 12 percent of Democrats did. Two-thirds of Democrats but just one-fifth of Republicans said they were very worried that their schools would not be able to comply with public health guidance. These views are most likely informed by what parents hear from party leaders, but also by differences in where Democrats and Republicans live and what types of schools their children attend, said Liz Hamel, director of public opinion and survey research at Kaiser Family Foundation.

Unlike many countries, the United States has not been able to get the virus under control before the new school year. Further complicating parents’ decision-making is that the science on the risks to children and the adults they’re in contact with is not definitive. Also, many parents feel they are faced with no good choices in terms of caring for and educating their children this year, and not all districts are being transparent about the virus’s spread in schools.

All these factors, Mr. Henig said, make it easier for people to fall back on their political affiliations — but that, in turn, makes it tougher to arrive at solutions.

“When these things become partisan, they become hard to solve,” he said. “One reason education was broadly consensual was the debate was over things like how much do you spend on schools, and money can be negotiated — you can find a middle ground. When you get a highly polarized issue where deep ideological beliefs are at stake, there is no middle ground.”

The Week Where Trump Went From Coronavirus Strategy to Testing Positive

In Stimulus Talks, McConnell Is Outside the Room and in a Tight Spot