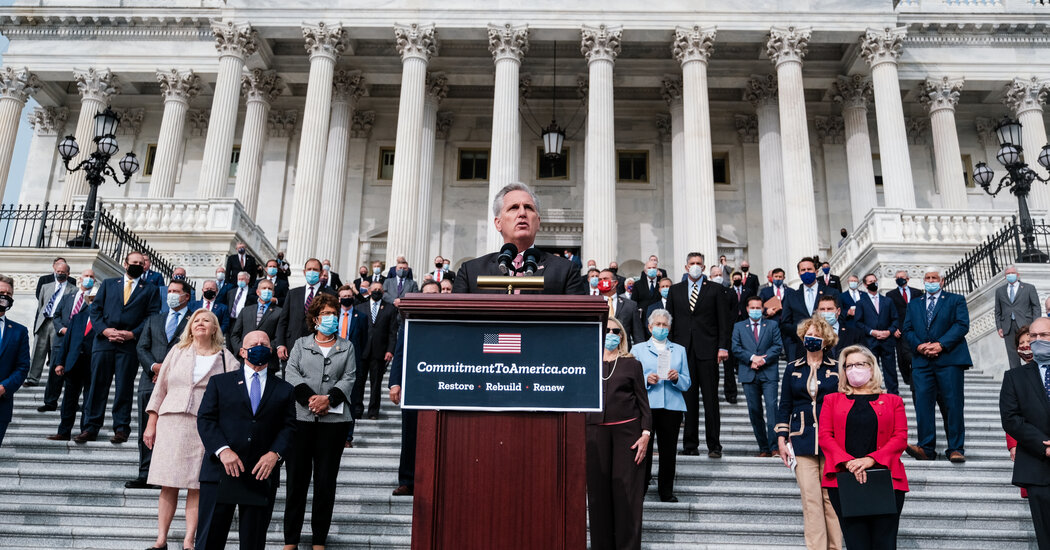 In a year when the Republican National Committee skipped writing a party platform and President Trump has offered little in the way of a plan for his second term should he win re-election, the agenda unveiled by House Republicans outside the Capitol on Tuesday was arguably the closest the party has come this year to presenting a road map for governing.

But for those searching for a long-term accounting of where the party would lead the nation, the one-page policy proposal they pitched, billed “The Republican Commitment to America,” offered relatively few answers.

Instead, the document reflected a party preoccupied with navigating the country back to the way things were in February, just before the pandemic took a sledgehammer to the nation’s health and economy — and when Republicans still felt they might have a reasonable shot at retaking the House majority — and then freezing the clock.

“Republicans helped build the greatest economy in a generation and the American way of life was thriving,” Representative Kevin McCarthy of California, the plan’s main author, said as he laid it out on Tuesday. “We will do it again. That is our promise to you.”

Though they called for ambitious new testing and vaccine deployment, it was far from the kind of forward-looking conservative vision that leading Republicans once insisted they needed to offer voters, and that past party leaders have rolled out every two years almost like clockwork. There was no mention of spending restraint or cutting entitlement programs, nor the party’s yearslong quest to repeal the Affordable Care Act.

The omissions were a bow to political reality at a time when Republicans are toiling to avoid losing an even larger share of the suburban voters who have flocked to Democrats in recent years, a trend that appears likely to continue in November. Mr. Trump has reminded Republicans just how powerful a political force a strong economy can be, and has demonstrated that adherence to what were once considered core party principles is no longer required. And undoubtedly, the gargantuan task of pulling the country out from a once-in-a-generation catastrophe will preoccupy whomever voters put in charge of the government come January.

But the thin agenda also underscored how thoroughly congressional Republicans have transformed themselves in the age of Mr. Trump even from the recent days when, under Speaker Paul D. Ryan, they prided themselves on being the intellectual engine of their party.

Four years into his presidency, the party has followed his lead and shied away from stances on the nation’s biggest, most intractable problems, like how to fix a broken health care system or address the ballooning national debt, that were once considered Republican orthodoxy. The party of free trade has mostly embraced Mr. Trump’s protectionist stance. The party of fiscal responsibility has overseen a record-setting explosion of the national debt. The party of free enterprise has stood by, mostly without criticism, as Mr. Trump has meddled in markets and individual businesses.

What has been left behind are an ideological hodgepodge of narrower policies and cultural wedge issues, a commitment to tax cuts at nearly any cost and, above all else, the vilification of Democrats.

On a sun-soaked morning in front of the Capitol, dozens of masked lawmakers gathered with Mr. McCarthy on Tuesday to tick through a range of proposals under slogans including “Restore Our Way of Life,” “Rebuild the Greatest Economy in History” and “Renew the American Dream” — all headings on a slickly produced website created for the occasion.

Representative Kevin Brady, Republican of Texas, pledged to make permanent the $1.5 trillion tax cut Republicans passed into law before they lost the House, making no mention of its contribution to the soaring national debt.

Representative Pete Stauber, Republican of Minnesota, highlighted proposed investments in policing and body cameras, saying nothing about the police violence and nationwide protests for racial justice that have made law enforcement a top issue this campaign season.

Representative Liz Cheney of Wyoming — the party’s highest-ranking woman, who has made a point of separating herself from some of Mr. Trump’s policies and is widely considered to be jockeying for a top leadership position beyond his presidency — spent most of her time blaming Democrats for forest fires raging across the West and the fires set by mobs in America’s cities.

“Every day you see the damage of years of Democrat policies,” Ms. Cheney said. She had little to say about Republican alternatives.

While Republicans glossed over their attempts to undo the health care law that has resulted in coverage for tens of millions of Americans, the document did include a pledge to protect coverage for pre-existing medical conditions — though there was no discussion of how. There was no plan for overhauling the immigration system, besides “secure our border, and enforce our immigration laws.” Discussion of trade was mostly limited to plans to try to break the country’s dependence on Chinese exports as part retaliation, part protection for past and future health crises.

And after years of party platforms calling for painful belt-tightening of social safety net programs, the Republicans merely proposed “reaching bipartisan consensus to protect and strengthen Social Security and Medicare and reduce our debt” — a position unlikely to offend anyone.

“A lot of this document can be summarized by saying, ‘Let’s delete the last seven months in our country,’ because Republicans were certainly, at least from an economic perspective, feeling bullish about their chances this year,” said Carlos Curbelo, a moderate Miami Republican who lost his House seat in the Democratic wave of 2018.

Michael Franc, a conservative policy analyst and former adviser to House Republican leaders, said the shift was part of a longer-term realignment by Republicans toward a more populist, working- and middle-class-focused party. He noted that the most specific proposals included in the agenda, like school choice, a child tax credit and increased funding for the police, appeared to be aimed at that group, while the ideas most popular with conservative intellectuals and elites, like entitlement reform, were downplayed.

“That is institutionalizing where some people have seen the party going, and it’s an acknowledgment that the days of talking about things like supply-side economics with voters are over,” he said.

The fact that Republicans in the House felt a need to produce their own platform at all, in a presidential election year when the top of the ticket typically sets the agenda, underscores the party’s unique predicament under Mr. Trump, a leader who has never been guided by much of a policy vision.

A handful of Republicans privately conceded that they were underwhelmed with the document. And despite the hoopla of Tuesday’s news conference, party leaders did not take any questions from reporters.

The presentation underscored how pessimistic Republicans have grown about their chances of retaking the House this year. It also reflected the changing nature of the party’s leadership on Capitol Hill.

Mr. Ryan was a self-declared policy wonk, who in 2016 insisted on putting out a lengthy set of proposals to balance the nation’s budget and pay for costly programs like Medicare or Social Security with draconian cuts. Mr. McCarthy has always leaned more toward politics than policy. He also watched as Mr. Ryan’s policy proposals were shredded by Mr. Trump’s 2016 campaign, in which he made deviation from Republican orthodoxy into a powerful selling point.

Republicans who have been critical of the party under Mr. Trump said if nothing else, the plan might help House Republicans fighting to hold onto their seats in competitive districts by compensating for the lack of a clear agenda emanating from the White House.

“Trump is talking about fake news, rigged elections, players kneeling, ‘Sleepy Joe,’ Antifa invasions and whether dead soldiers are losers,” said Brendan Buck, a former top aide to Mr. Ryan. “Whatever policy he’s ostensibly for, he’s not running on an agenda. And for House members in marginal districts, you need more than the stream of consciousness that he’s offering every day.”

Republicans Gear Up to Renominate Trump

The Democratic contenders pledge a path forward out of crises.