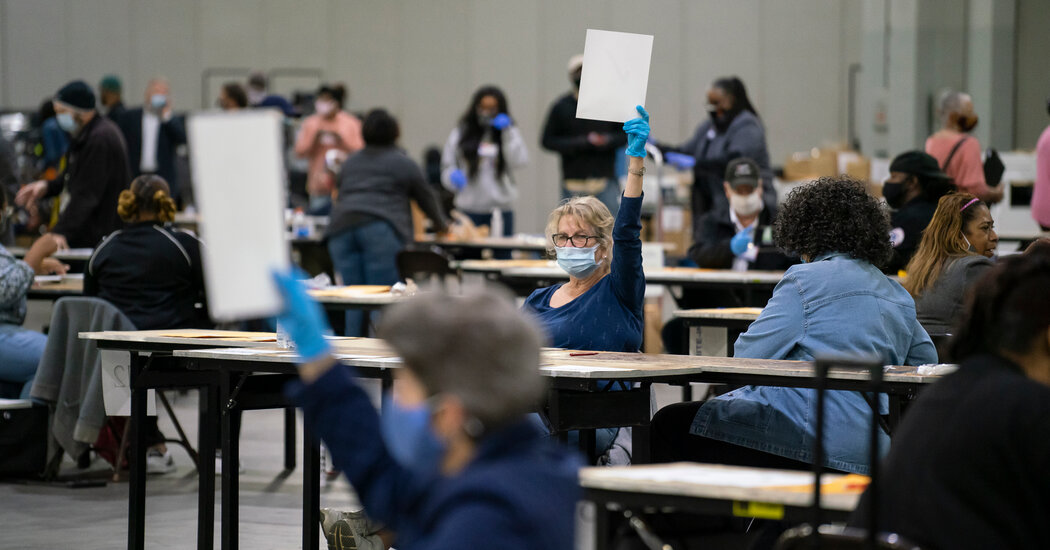 As President Trump and his Republican allies continue trying to undermine the election, the certification of the vote totals in each state is the next major step in formalizing President-elect Joseph R. Biden Jr.’s victory.

A key part of the G.O.P. strategy has been to delay certification processes in battleground states that Mr. Biden won, in the hopes that, if state officials miss their deadlines, legislators will subvert the popular vote and appoint pro-Trump slates to the Electoral College. But that’s extremely unlikely to happen.

Here’s a breakdown of the certification deadlines and other key dates in battleground states, and what will happen between now and Inauguration Day.

There is a 5 p.m. Friday deadline for officials to certify election results in Georgia, which Mr. Biden won in a rare Democratic victory in the Deep South that has left Republicans deeply frustrated.

The Georgia secretary of state, Brad Raffensperger, a Republican, has said the state will meet the Friday deadline despite having conducted a time-consuming hand recount of the five million ballots cast there.

Mr. Raffensperger is responsible for certifying the results, and he has fiercely defended the state’s electoral process against attacks from Mr. Trump. And on Thursday, a federal judge in Georgia — Steven Grimberg, whom Mr. Trump appointed — rejected a request to block certification.

Mr. Trump’s campaign could still ask for a machine recount of the vote, but Mr. Biden’s lead is far larger than such a recount could be expected to overcome.

Monday is the deadline for counties in Pennsylvania to certify their totals and send them to Kathy Boockvar, the secretary of the commonwealth, who will certify the state results. Pennsylvania doesn’t have a hard deadline for when Ms. Boockvar must sign off, but there is no reason to expect a delay.

In Michigan, the Board of State Canvassers has scheduled a meeting on Monday to review and certify the results previously certified by canvassing boards in each county. Despite Republican protests over the certification of results in Wayne County, which includes Detroit, the state is expected to certify on time.

Mr. Trump has invited Michigan Republican lawmakers to the White House on Friday, and his campaign is openly trying to block the certification process in the hopes of getting Republican state legislators to overrule millions of Michigan voters and appoint a pro-Trump slate to the Electoral College.

Legislators aren’t likely to do that. But even if they did, Gov. Gretchen Whitmer, a Democrat, could certify a separate, pro-Biden slate of electors. It would then be up to Congress to choose between the two slates, and election lawyers say federal law would favor the governor’s, including if Congress deadlocked. Congress could also, in theory, toss out Michigan’s electoral votes altogether — in which case Mr. Biden would still win the Electoral College.

In Nevada, which Mr. Biden won, the state Supreme Court will meet on Nov. 24 to certify the results. Ultimately, the governor will need to confirm the outcome. The Trump campaign has filed a lawsuit baselessly claiming that Mr. Trump actually won Nevada, and conservative groups are trying to nullify the results, but these claims are highly unlikely to lead anywhere.

This is also the certification deadline for Minnesota and North Carolina, neither of which is expected to be contentious. Mr. Biden won Minnesota; Mr. Trump won North Carolina.

This is the deadline for Ohio, which Mr. Trump won, to certify its results. No challenges are expected.

The Arizona Republican Party asked a court to postpone certification in Maricopa County, which includes Phoenix, but a judge rejected the request on Thursday.

Given this, counties are expected to certify on time and Katie Hobbs, the secretary of state and a Democrat, is expected to sign off on the final, statewide certification.

No disputes are expected in Iowa or Nebraska that could delay certification.

This is the deadline for Wisconsin, which Mr. Biden won, to certify its results.

Wisconsin has already completed county-level certification, but the Trump campaign is seeking a partial recount, which, if it proceeds, should be complete by the deadline and is not expected to alter the results significantly. Once the recount is completed, the Wisconsin Elections Commission will meet to certify the results statewide.

This is a key date in the democratic process: If states resolve all disputes and certify their results by Dec. 8, the results should be insulated from further legal challenges, ensuring that states won by Mr. Biden will send Biden delegates to the Electoral College.

The certification processes leading up to this date vary from state to state, but the final step is the same everywhere under federal law: The governor of each state must compile the certified results and send them to Congress, along with the names of the state’s Electoral College delegates.

Electors will meet on Dec. 14 in their respective states and cast their votes. This vote is, constitutionally, what determines the next president.

Mr. Biden has 306 electoral votes to Mr. Trump’s 232. Many states formally require their electors to vote for the candidate they pledged to vote for, generally the winner of the state’s popular vote. Historically, rogue electors have been few and far between, and have never altered the outcome.

Congress is ultimately responsible for counting and certifying the votes cast by the Electoral College, and it is scheduled to do so on Jan. 6.

If there are still disputes at this point — if Republican legislators in a state were to appoint a pro-Trump Electoral College slate in opposition to voters’ will, for instance, and the Democratic governor of the state were to appoint a pro-Biden slate — it would be Congress’s job to resolve them. Election law experts say that under federal statute, the governor’s slate should be favored.

Mr. Biden will be sworn in as the 46th president of the United States.