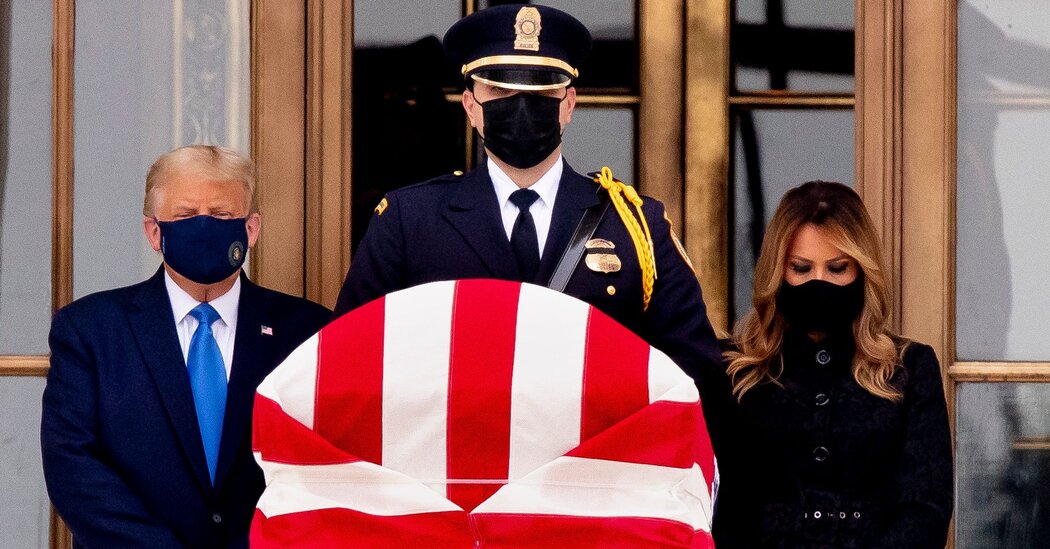 WASHINGTON — President Trump was jeered by protesters on Thursday morning as he paid his respects to Justice Ruth Bader Ginsburg, standing silently by her coffin at the top of the Supreme Court steps as a vigorous chant of “Vote him out!” erupted on the street below.

Wearing a face mask — unusual for him — and a blue tie instead of his trademark red power tie, Mr. Trump stared ahead and closed his eyes at times near the justice’s flag-draped coffin.

But the quiet of the moment was punctured by the loud boos and shouts of demonstrators about a block away. Along with the chant of “Vote him out!” were calls of “Honor her wish!” — a reference to Justice Ginsburg’s reported deathbed request that her replacement not be confirmed until a “new president is installed.”

It was not clear whether Mr. Trump and his wife, Melania, who joined him for a visit of less than two minutes, could hear the heckling, which was clearly audible on television.

Asked later in the day by a reporter about the jeering, Mr. Trump said he could “hardly hear it.”

“Somebody said there was some chanting, but they were right next to the media,” he said. “But we really could hardly hear too much. We heard — we heard a sound, but it wasn’t very strong.”

“The chants were appalling, but certainly to be expected when you’re in the heart of the swamp,” she said. “I thought it was an appalling and disrespectful thing to do, as the president honored Justice Ginsburg.”

Mr. Trump has angered many supporters of Justice Ginsburg by quickly announcing that he would nominate a new conservative justice to replace her before the election in November, and by questioning, without evidence, whether her “dying wish” that another president appoint her replacement was real or concocted by top Democrats.

The president, who does not often encounter hostile members of the public at close range, was also booed and heckled during Game 5 of the World Series last fall.

Several of Mr. Trump’s predecessors have also been booed in public, including President Bill Clinton during a 1993 visit to the Vietnam Veterans Memorial and President Ronald Reagan at a ballet performance at the Kennedy Center.

Following Mr. Trump at Justice Ginsburg’s coffin on Thursday was his chief of staff, Mark Meadows, and national security adviser, Robert C. O’Brien. The two men also wore masks, and they bowed their heads with their eyes closed. Justice Ginsburg, who died on Friday, lay in repose at the court on Wednesday and Thursday.

Without Ginsburg, Supreme Court Could Rule Three Ways on Obamacare

Barr ‘Unmasking’ Probe Finds No Irregularities and is Given to Durham