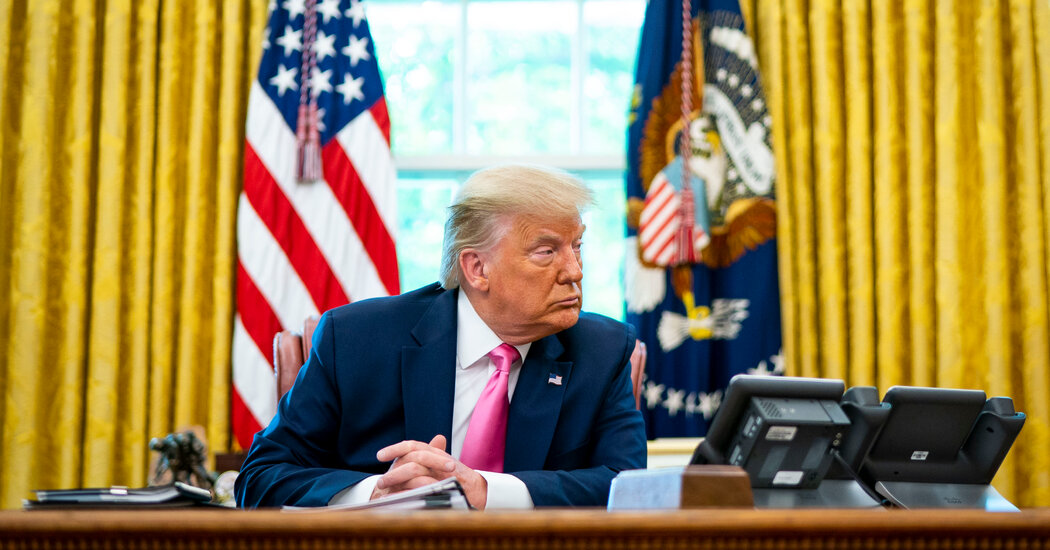 WASHINGTON — President Trump directed the federal government on Tuesday not to count undocumented immigrants when allocating the nation’s House districts, a move that critics called a transparent political ploy to help Republicans in violation of the Constitution.

The president’s directive would exclude millions of people when determining how many House seats each state should have based on the once-a-decade census, reversing the longstanding policy of counting everyone regardless of citizenship or legal status. The effect would likely shift several seats from Democratic states to Republican states.

“There used to be a time when you could proudly declare, ‘I am a citizen of the United States,’” Mr. Trump said in a written statement after signing a memorandum to the Commerce Department, which oversees the Census Bureau. “But now, the radical left is trying to erase the existence of this concept and conceal the number of illegal aliens in our country. This is all part of a broader left-wing effort to erode the rights of Americans citizens, and I will not stand for it.”

The action directly conflicts with the traditional consensus interpretation of the Constitution and will almost surely be challenged in court, potentially delaying its effect if not blocking its enactment altogether. But it fit into Mr. Trump’s efforts to curb both legal and illegal immigration at a time when he is anxiously trying to galvanize his political base heading into a fall election season trailing his Democratic opponent.

“I think the Donald Trump view is: ‘I can look like I’m trying to do something by stoking anti-immigrant fervor, and if I lose in court then, I just stoke anti-court fervor too,’” Joshua A. Geltzer, the director of the Institute for Constitutional Advocacy and Protection at Georgetown, said in an interview. “It should be legally impossible as well as factually difficult to do.”

The move comes a year after Mr. Trump was blocked by the Supreme Court from adding a citizenship question to the census on the grounds that its ostensible reasoning “seems to have been contrived.” The administration has been trying ever since to collect information on undocumented immigrants through separate means like driver’s license files.

A study last year by the Center for Immigration Studies, a group that supports limits on immigration, found that excluding immigrants from the count for purposes of drawing congressional districts would take away seats from some states while giving more to others.

Excluding unauthorized immigrants in 2020 would redistribute three seats, the study found, with California, New York and Texas all losing a seat that they would have had otherwise, while Ohio, Alabama and Minnesota would each gain one. The study found even more sweeping effects if the U.S.-born children of undocumented immigrants were excluded, but the president’s directive made no mention of them.

Steven Camarota, the research director for the center, said the administration’s effort would be difficult administratively and likely tied up in court. “Nevertheless,” he said, “the president has done the country an important service by reminding us that tolerating large-scale illegal immigration creates a number of unavoidable consequences, including diluting the political representation of American citizens in Congress and the Electoral College.”

The president’s directive on Tuesday amounted to his latest election-year effort to restrict immigration and immigration rights in the United States, lately predicated on the need to stem the spread of the coronavirus.

The administration decided last month to suspend new work visas and bar hundreds of thousands of foreigners from seeking employment in the United States, drawing immediate opposition from business leaders and several states.

But last week administration officials backed away from a separate plan to strip international college students of their visas if they did not attend at least some classes in person. Earlier this month, Mr. Trump told Telemundo that he would sign a “much bigger bill on immigration” through an executive order, although that has not come to fruition.

The president’s move to exclude unauthorized immigrants from congressional apportionment upends a long history. Even as he signed his memorandum on Tuesday, the Census Bureau’s own website continued to say in a question-and-answer section that undocumented residents are to be counted: “Yes, all people (citizens and noncitizens) with a usual residence in the 50 states are to be included in the census and thus in the apportionment counts.”

The president’s policy appeared at odds with the Constitution, which requires the government to conduct an “actual enumeration” of all people living in the United States without distinguishing whether they are citizens. But the memorandum signed by Mr. Trump argued that the government has always made distinctions like not counting foreign diplomats or temporary visitors even though they are in the United States physically. Therefore, the memorandum argued, the government can make the further distinction of not counting people who have no legal right to be in the country in the first place.

Critics said the administration’s efforts first to include a citizenship question and now to disregard undocumented immigrants from apportionment would lead to undercounts of even legal noncitizens and minority residents, resulting in less representation and federal funding in areas where they live, which tend to vote Democratic.

Marielena Hincapié, the executive director of the National Immigration Law Center Immigrant Justice Fund, said that regardless of whether Mr. Trump’s latest action was legal, it would discourage compliance with the census among Latinos, who already complete the survey at lower rates than people of other races.

“This is his go-to play every time that he’s feeling cornered or he’s feeling like he’s losing,” Ms. Hincapié said. “He uses immigrants and immigration to divide and distract, and at the same time he sends that chilling effect through all immigrant communities who have already been living in fear under his administration.”