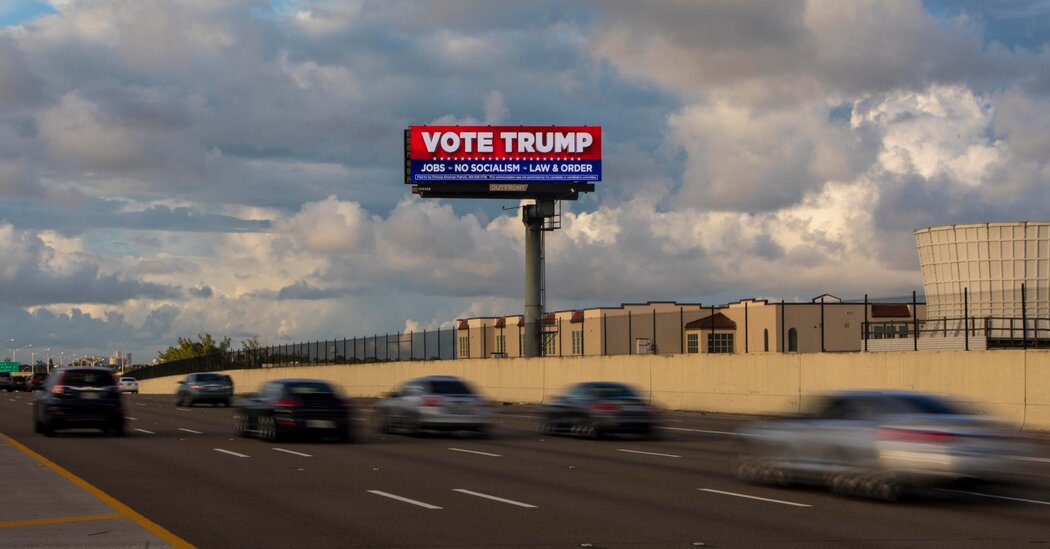 President Trump’s re-election campaign committee ended September with only $63.1 million in the bank despite canceling some television buys late last month, leaving him badly outmatched financially against Joseph R. Biden Jr. in the final stretch of the campaign.

New filings with the Federal Election Commission showed the extent of Mr. Trump’s cash troubles, which are severe enough that he diverted time from key battleground states and flew to California on Sunday for a fund-raiser with just over two weeks until Election Day. The president ended September with just over half as much money as he had at the beginning of the month.

While Mr. Trump’s campaign and its shared committees with the Republican National Committee have raised $1.5 billion since the start of 2019, the disclosures late Tuesday showed that his main re-election committee — the account that must pay for many of the race’s most important costs, including most television ads — had only a small slice remaining.

Fortunes have reversed sharply from this spring, when Mr. Trump and the Republicans had nearly $190 million more in the bank than Mr. Biden and the Democrats did when he emerged as the presumptive Democratic nominee.

“The Trump campaign has all the resources we need going into the homestretch of this election,” said Samantha Zager, a spokeswoman for Mr. Trump’s campaign.

She added, “As Hillary Clinton proved when she outspent us two to one in 2016, no amount of money can buy the presidency.”

Democrats took glee at the diminished size of a war chest that Mr. Trump’s former campaign manager once compared to the Death Star from “Star Wars.”

Recent campaign filings show how much more the Trump campaign’s joint operation with the Republican Party is spending to raise its money than Mr. Biden. The two joint Trump committees with the R.N.C. spent $190.8 million in July, August and September to raise $355.2 million.

The Biden campaign spent less than half as much on fund-raising from its two joint operations with the Democratic Party ($82.4 million) and yet raised far more, $457 million, during that same period.

As of Tuesday, Mr. Biden’s campaign committee had not yet filed its full September report, but he entered September with $180 million in cash on hand in that account compared with Mr. Trump’s $121 million and $900,000 in debts at the start of September.

“Yikes,” Rufus Gifford, one of Mr. Biden’s deputy campaign managers who oversees fund-raising, wrote on Twitter when Mr. Trump’s amount of cash on hand became public. Mr. Gifford added, “Remember when Trump said he would fund his own campaign if he needed to? Well …. He needs to.”

Mr. Trump’s campaign has been seeking to trim costs for more than two months, since Bill Stepien replaced Brad Parscale as campaign manager.

Under Mr. Parscale, the campaign spent heavily as it invested in constructing a huge database of email addresses and phone numbers to reach supporters and ask for money. But as the election neared, hopeful projections for a large uptick in contributions have not materialized.

Mr. Trump’s campaign has been cutting television ads from several critical battlegrounds in recent weeks, including states he is defending; states he had once expected to win fairly comfortably, like Ohio and Iowa; and states he had hoped to flip in 2020, such as Minnesota and New Hampshire.

This week, the Trump campaign and the R.N.C. announced a combined $55 million ad buy for the final two weeks, with the party supplementing the campaign ads in key states.

Other Republican megadonors have donated large sums to super PACs to help Mr. Trump, none more so than Sheldon Adelson, the casino magnate, who along with his wife, Miriam, contributed $75 million to a pro-Trump advertising effort.

Also on Tuesday, a Silicon Valley-linked super PAC supporting Mr. Biden, Future Forward PAC, announced $66 million in donations since July, with nearly half of the money coming from dark money groups that do not disclose their donors. The biggest named donor was Dustin Moskovitz, a Facebook co-founder, who gave nearly $22 million.

Democrats Hope 2020 Is the Year They Flip the Texas House