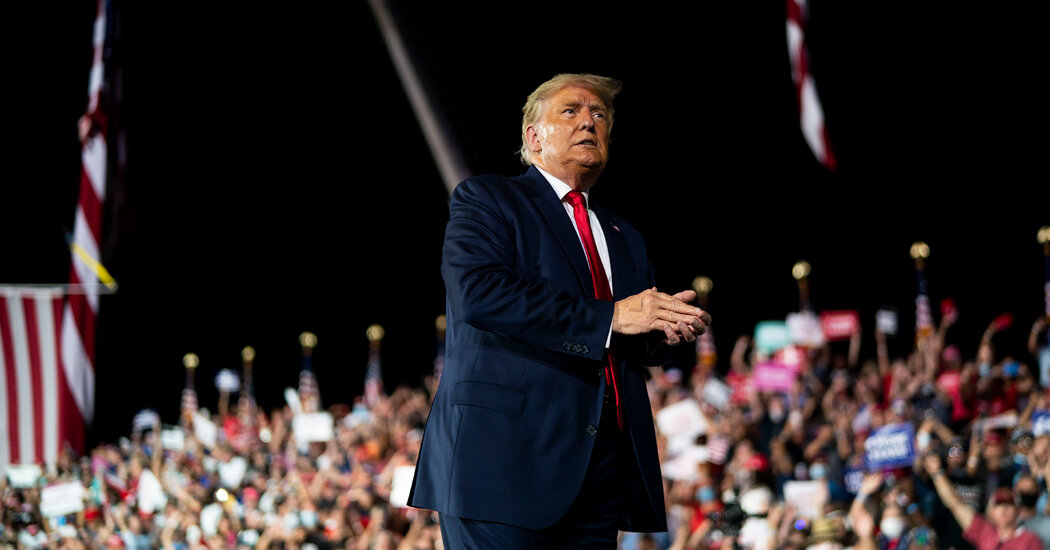 President Trump made a litany of false or misleading claims — many of them familiar — about his Democratic opponent, Joseph R. Biden Jr., and the coronavirus pandemic on Monday in a campaign rally in Florida. Here’s a review of the facts.

“Sleepy Joe wants to quadruple your taxes. You know? Wants to quadruple. How about where he gets caught again? He said, ‘Oh, no, we are not going to give a tax increase, but we are going to terminate all of the Trump tax cuts.’ Well, that’s $2,000, plus child tax credits, plus all of the other things.”

False. The 2017 tax-cut law lowered the top individual tax rate to 37 percent from 39.6 percent. Mr. Biden is proposing reverting that top rate to 39.6 percent, but no other income bracket would be affected. Under Mr. Biden’s plan, no one making under $400,000 would see a direct increase in their taxes, though they might feel the indirect effects of the higher corporate taxes that Mr. Biden is also proposing. Mr. Biden would also expand the child tax credit, not eliminate it.

“Obama gave the whole planet away to Castro and I said: ‘No, thank you. We’re not doing that.’ That’s why we just got the Bay of Pigs award from the Cuban-Americans.”

This is misleading. Mr. Trump is imprecisely referring to a shield and endorsement he received from a group of Cuban veterans and stating an incorrect timeline.

In 2016, Mr. Trump was endorsed by a Bay of Pigs veterans association and presented with the Shield of Brigade 2506. This year, the group called it a “recognition award.” In 2017, Mr. Trump reimposed travel and commercial restrictions on Cuba, which the administration of President Barack Obama had eased. He did not receive the award because of that reversal.

“But the World Health Organization, did you see what happened? They just came out a little while ago and they admitted that Donald Trump was right. The lockdowns are doing tremendous damage to these Democrat-run states.”

False. Mr. Trump was most likely referring to and distorting comments made by Dr. David Nabarro, a special envoy to the World Health Organization.

Mr. Trump resisted shutting down the economy in the early months of the coronavirus, when the W.H.O. was warning that lifting restrictions would lead to a “deadly resurgence.”

Dr. Nabarro said in an interview last week with The Spectator that national lockdowns should not be the primary means of controlling the virus, but rather used to “buy you time to reorganize, regroup, rebalance your resources, protect your health workers who are exhausted.”

Countries, he said, should aim instead for a “middle path” between lockdowns and letting the virus “run wild and build up herd immunity” — which Mr. Trump suggested last month.

That would require testing, contact tracing, isolation, good hygiene and robust monitoring at a local level, Dr. Nabarro said. He did not mention Mr. Trump or the United States, but noted that East Asia, Germany and parts of Canada were models of that approach.

“And if you look at our upward path, no country in the world has recovered the way we’ve recovered economically or otherwise, not even close.”

False. Economic recovery in the United States has outperformed some peer nations, but not every other country in the world.

Its gross domestic product contracted by 9.1 percent in the second quarter; among the nations of the Group of 20, five other countries’ shrank at a smaller rate, while China’s grew at 11.5 percent.

Its unemployment rate for August — the latest month for which there is available data to compare across all countries — was 8.4 percent. That’s higher than the average 7.4 percent for the countries in the Organization for Economic Cooperation and Development.

“I just got nominated for the Nobel Prize. And then I turned on the fake news, story after story. They talk about your weather in the Panhandle and they talk about this. Story after story, no mention. Remember when Obama got it right at the beginning and he didn’t even know why he got it.”

This is misleading. Mr. Trump was nominated for the 2021 Nobel Peace Prize by two right-wing Scandinavian politicians, whereas Mr. Obama won one in 2009.

There were 318 candidates for the Nobel Peace Prize this year, and thousands of people have been nominated over time, including such figures as Hitler and Stalin.

Nominations can be put forth by members of national assemblies and national governments, university professors in certain fields like history and social sciences, and members of international bodies like the International Court of Justice in The Hague, among others.

Mr. Trump made a number of claims The New York Times has previously fact-checked:

Curious about the accuracy of a claim? Email factcheck@nytimes.com.

Trump teases a Gettysburg convention speech. Experts say it would be an ethics breach.

For the Secret Service, a New Question: Who Will Protect Them From Trump?

Trump Calls His Illness ‘a Blessing From God’