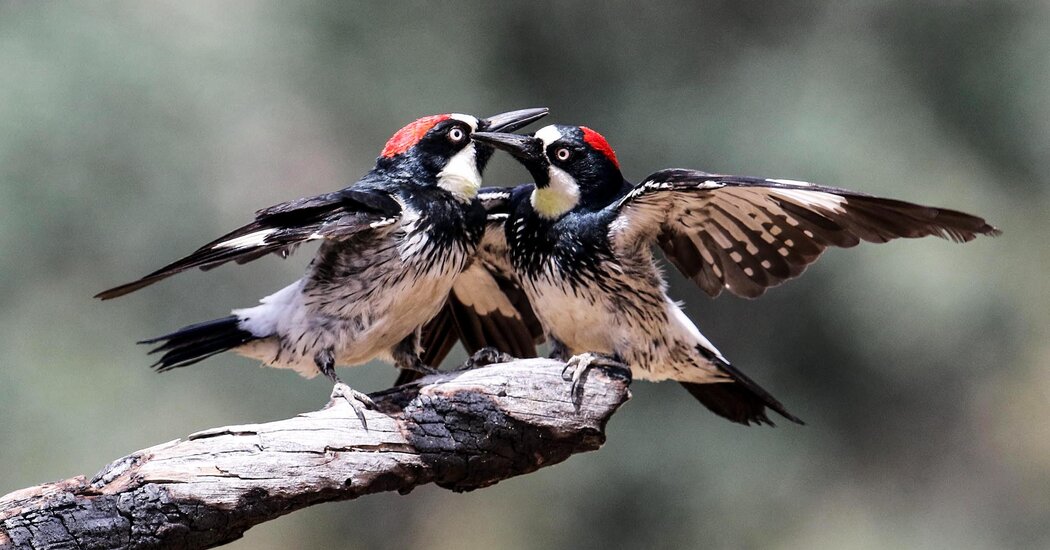 Acorn woodpeckers are renowned food hoarders. Every fall they stash as many as thousands of acorns in holes drilled into dead tree stumps in preparation for winter. Guarding these “granary trees” against acorn theft is a fierce, familial affair. But all hell breaks loose when there are deaths in a family and newly vacant spots in prime habitat are up for grabs.

The news travels fast. Nearby woodpecker groups rush to the site and fight long, gory battles until one collective wins, according to a study published Monday in Current Biology. These wars also draw woodpecker audiences, the researchers reported, who leave their own territories unattended, demonstrating the immense investment and risks the birds are willing to take in pursuit of better breeding opportunities and intelligence gathering.

“I think these power struggles are major events in the birds’ social calendars,” said Sahas Barve, an avian biologist at the Smithsonian National Museum of Natural History and lead author of the study. “They’re definitely trying to get social information out of it.”

Acorn woodpecker societies are complex. Each family consists of up to seven adult males, often brothers, which breed with one to three females, often sisters but unrelated to the males. They live with nest helpers who are typically their offspring from previous years. Together they defend 15-acre territories, on average, encompassing one or more granaries in the oak forests along coastal Oregon down into Mexico.

The helpers don’t breed, but stick around for five to six years to help raise their half-siblings until these babysitters can find a new territory to start their own families. “It’s all about biding your time and gaining indirect fitness,” Dr. Barve said. “But it’s never as good as reproducing directly.”

Power struggles are thus a result of helpers striving to become breeders. This becomes possible when a family loses either all its breeding males or females to old age or predators like Cooper’s hawks. Depending on the vacancies, young brothers or sisters in a family form same-sex coalitions to battle other brother or sister groups. “It’s not just that you’re helping your brother get a spot in a new territory, for instance, but the whole coalition will move there,” Dr. Barve said.

In California’s Hastings Reserve, as many as 12 breeding vacancies open up every year among 50 acorn woodpecker groups that Dr. Barve and his team follow. In 2018 and 2019 the researchers observed three power struggles, all involving female vacancies.

Each combat site lured up to 50 helper females representing a dozen or more competing coalitions. The birds spread their wings to put on a show of superiority and strength and engaged in incessant bickering; at times the war got bloody. “We’ve seen birds with eyes gouged out, wings broken, bloody feathers, and birds that fell to the ground fighting each other,” Dr. Barve said. “It’s the real stuff.”

To keep track of these chaotic events, the researchers tapped into the movements of up to 70 woodpeckers, which were fitted with radio tags on their backs and followed since 2016. The birds included 13 young females that engaged in warfare during the study period and returned day after day from nearby territories. Some fought for 10 hours at a stretch over four consecutive days. (They lost to an untagged female coalition.)

News of the wars spreads quickly, and within an hour an audience gathers. The researchers recorded some spectator birds — females with secure breeding positions in other territories, and males — traveling more than two miles and spending up to an hour a day observing these fights.

“The speed at which such information is communicated through populations has always struck me,” said Reed Bowman, an avian ecologist at Archbold Biological Station in Florida, who was not involved in the study.

Dr. Barve and his team suspect that these spectator birds show up in order to understand other birds around them. “They must immediately see all the big sibling coalitions in the area, gauge their body conditions and the quality of the territory they’re fighting over,” he said.

But these decisions are fraught with risks. Woodpeckers undertake energy-intensive travels, and they leave their own territories unattended and vulnerable to acorn theft while also divesting from their daily chores.

As the research team continues to understand how and why woodpecker societies make these decisions, Damien Farine, a behavioral ecologist at the Max Planck Institute of Animal Behavior in Germany, said that the study shows the value of tracking individual birds.

“With studies like this one, we’re starting to understand how populations are structured as an outcome of all its individuals’ behaviors,” he said.

Your Hot-Weather Guide to Coronavirus, Air-Conditioning and Airflow

‘Dwarf Pride’ Was Hard Won. Will a Growth Drug Undermine It?

Earthquake in North Carolina Is Strongest in the Area Since 1916