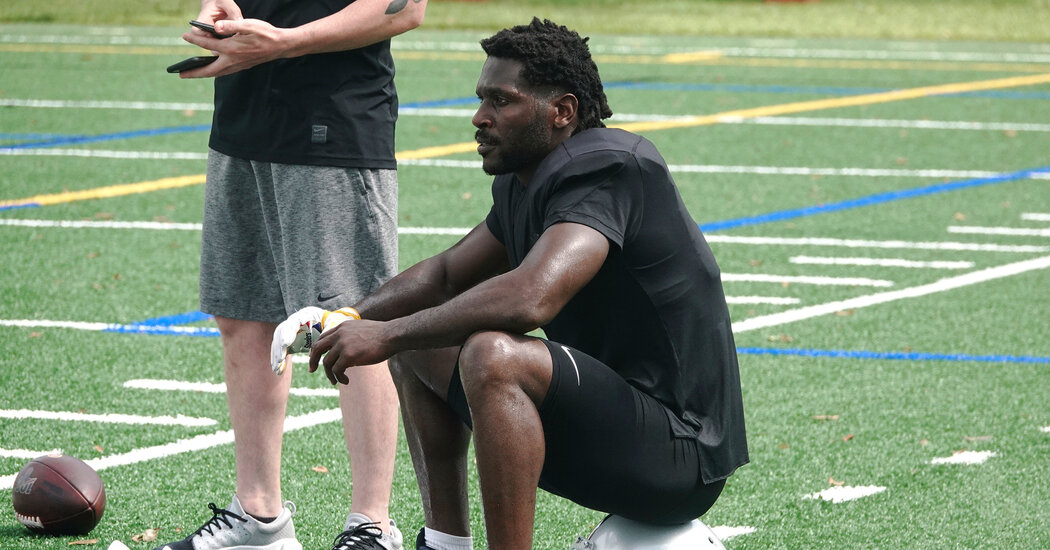 The N.F.L. on Friday suspended wide receiver Antonio Brown for eight regular season games this season after an investigation into accusations that he sexually assaulted his former trainer in 2017 and 2018. The suspension was first reported by the Washington Post and confirmed in a statement released by the league.

Brown will also have to participate in a counseling and treatment program. Any additional violations of the N.F.L.’s personal conduct policy “will likely result in more significant discipline.”

A seven-time Pro Bowl selection while with the Pittsburgh Steelers, Brown, 32, is an unrestricted free agent and can sign with any team. If he is signed before the start of the regular season, he could take part in his club’s preseason activities. Brown’s suspension would begin on Sept. 5 and he would be able to return after the team’s eighth game.

Brown was released by New England Patriots on Sept. 21, 2019, less than two weeks after he was released by the Oakland Raiders. He competed in one game with the Patriots, scoring a touchdown. But after Brown lashed out against another woman who gave her account of a separate incident of his sexual misconduct in a Sports Illustrated story, the Patriots let the All-Pro receiver go.

He has denied the accusations of sexual assault, made in a lawsuit filed in federal court in South Florida, where Brown has a home.

The N.F.L. began its investigation after the suit was filed on Sept. 11 last year and spoke with the plaintiff in a meeting five days later that reportedly lasted 10 hours. The suspension, which was announced by the N.F.L.’s special counsel for conduct, Todd Jones, comes as the league has been under scrutiny for the uneven way it has handled cases involving domestic abuse, sexual assault and harassment.

Brown’s case was unusual partly because he has tried to defend himself on social media during the investigation. Since being released in 2019, he has said at least twice that he planned to retire from football. He has also picked fights with his employers, most notably the Raiders, who released him after a series of incidents during the off-season and training camp last year, including a dispute over the type of helmet he could wear.

Despite his troubles off the field, other prominent players have come to his defense. Brown worked out with Tampa Bay Buccaneers quarterback Tom Brady, who played with Brown in 2019. Brown also worked out with Dwayne Haskins, a quarterback with the Washington Football Team.

Brown also worked out with Lamar Jackson, the star quarterback with the Baltimore Ravens, who this week publicly lobbied for the team to sign the receiver.

Too Many Sports, Not Enough Time

Andretti Is a Familiar Name in an Unfamiliar Place: The Pole