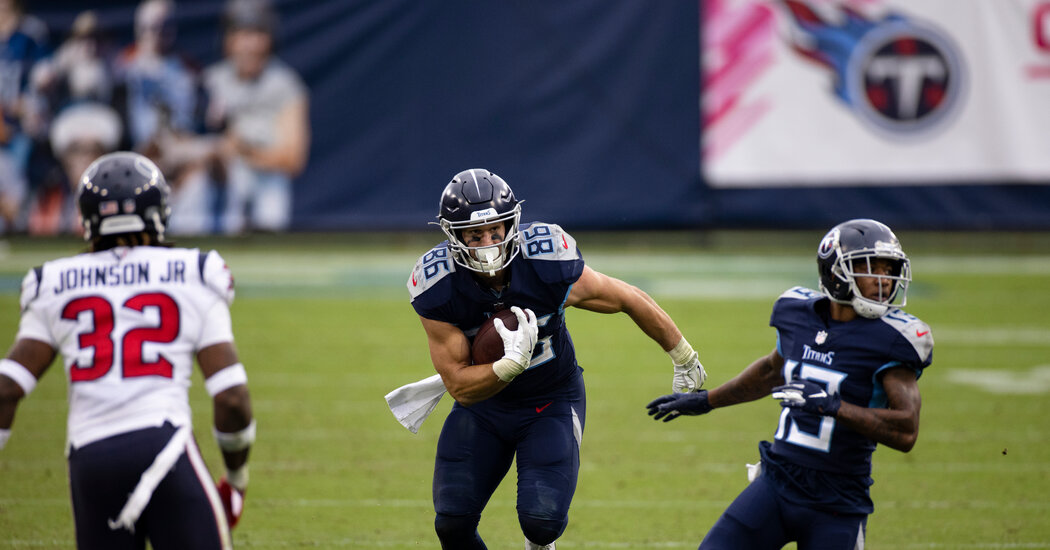 The N.F.L. has fined the Tennessee Titans $350,000 for their handling of the largest outbreak of coronavirus infections this season, which forced the league to reschedule an array of games.

The league, though, did not suspend anyone associated with the Titans, including their coach and general manager, and players who were seen on video participating in an ad hoc practice away from the team’s complex. The fine was imposed for failing to communicate workout protocols and not wearing masks in facilities.

Roger Goodell, the league commissioner, said two weeks ago that the team, which at 5-1 is among the league’s most exciting on the field, was cooperating with the investigation. He had signaled then that no Titans would be held accountable for the outbreak. “This is not about discipline — this is about keeping our personnel safe,” Goodell said on Oct. 13.

The league also stopped far short of issuing stiff penalties like the loss of draft picks and the forfeiting of games.

The penalties, which were first reported by NFL.com on Sunday, stem in part from reports that Titans players continued informal practices away from the team’s complex even after the outbreak led the team to stop holding in-person activities. Twenty-three players and team personnel are known to have tested positive for the virus since Sept. 24.

The N.F.L. and the N.F.L. Players Association investigated players who held an off-site workout on Sept. 30, a day after the Titans and the Vikings — their opponent from the weekend before — were told to have no in-person activities.

The league and union also looked at how the virus entered the Titans’ complex and how it spread. The league’s chief medical officer declined to disclose what was learned.

The league may now be forced to turn its attention to the Las Vegas Raiders, who have had several players test positive for the virus. Last week, several members of the offensive line were sent home because they had been in close contact with a teammate, Trent Brown, who has tested positive and, NFL.com reported, has not worn a tracking device consistently to allow the league to do contact tracing. He and his teammates were also reportedly not wearing masks while in close contact with one another.

Four players came off the league’s Covid-19 reserve list and were cleared to play after they tested negative for the virus. The Raiders were set to play the Tampa Bay Buccaneers in Las Vegas on Sunday afternoon.

Still, the fine, the largest for a violation of the protocols, came as the league tried to keep its season on track amid infections that had spread to at least four teams. The decision to penalize the Titans came three weeks after the league announced stronger measures designed to lower the risk of infections, including using video surveillance cameras in team facilities to monitor the compliance of protocols such as wearing masks.

The league also said that teams not in compliance could be fined, lose draft picks and forfeit games if their actions affected other teams.

The outbreak on the Titans had already led to the postponement, by three weeks, of their game against the Pittsburgh Steelers, which was originally planned for Oct. 4. They finally played on Sunday, with the Steelers winning, 27-24.

With the number of cases on the team continuing to grow, and the team unable to meet in person to practice for nearly two weeks, the league had postponed the Titans’ matchup against the Buffalo Bills, moving it from a Sunday to a Tuesday.

The postponement and penalties are not the only scheduling problems the league has been forced to tackle. The league postponed by a day, to Monday, the Week 4 New England-Kansas City game after it was revealed that Cam Newton, the Patriots’ star quarterback, and a Chiefs practice squad quarterback had tested positive for the virus on Oct. 3. On that Wednesday, Stephon Gilmore, another Patriots star, tested positive as well, calling into question the league’s decision to allow the teams to play.

The league has not yet taken the step of adding an 18th week to the season to accommodate postponed games. Nor is there any serious consideration yet of shortening the season. Instead, the league will continue to rely on juggling the existing schedule, including rescheduling games by a day or two, to a Monday or a Tuesday, for example.

The league has also fined coaches hundreds of thousands of dollars for failing to wear their face masks properly during games. The Raiders were also fined $50,000 this month for allowing an unauthorized person in their locker room, potentially exposing members of the team. Ten Raiders were fined as much as $30,000 this month for attending a crowded, indoor charity event and not wearing masks while there, violating local health guidelines.

Normally, the competition committee, which includes current coaches, would debate whether teams ought to be penalized for their actions. But because those coaches might have an incentive to come down hard on a rival team, the league created a committee of former coaches, general managers and retired players, including former Giants Coach Tom Coughlin and former Colts General Manager Bill Polian, to make recommendations to the commissioner.

The commissioner, though, has ultimate authority over penalties.

In the league’s century-long history, games have been canceled, postponed or moved because of severe weather or other incidents, including when the roof of the Metrodome collapsed. Only one game appears to have been forfeited, though the records are incomplete.

In 1921 — the league’s second year — the visiting Rochester Jeffersons refused to take the field against the Washington Senators because of the poor condition of the field. In those days, if there was a dispute over whether the field was unplayable, the manager of the home team would decide whether to cancel the game. The Jeffersons’ manager did not want to risk injuring his players and wanted the game canceled. But with fans in their seats, the Senators’ manager wanted to play, so the referee ruled that the Jeffersons had forfeited the game, according to a newspaper article at the time.

The forfeited game does not appear in any record books, however. Final standings were not published at the time and only reconstructed years later, and often imperfectly. Only teams that played a minimum of six games against other league members were included in those reconstructed standings, and the Washington club failed to meet that threshold that year, according to Bob Carroll, who wrote about the game for the journal, The Coffin Corner.

The Jets Kept Buffalo Out of the End Zone. It Wasn’t Enough.

A Mound Visit, a Quick Read and a Lifeline for the Astros