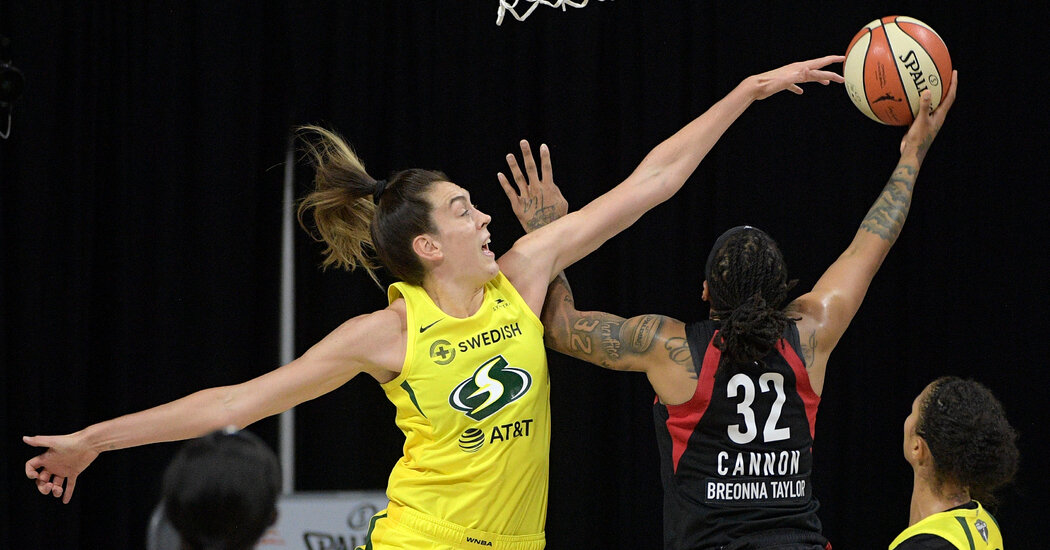 BRADENTON, Fla. — Breanna Stewart scored 22 points, and Seattle moved within a victory of a W.N.B.A. championship, beating the Las Vegas Aces, 104-91, on Sunday.

The Storm will try to win their fourth title with a victory in Game 3 on Tuesday night. They won championships in 2004, 2010 and 2018, and Sue Bird was running the show in all three of them.

Two days after she set the W.N.B.A. finals and playoffs record with 16 assists, Bird, 39, had 10 to go along with 16 points. The team had 33 assists to set a W.N.B.A. championship-round record as the Storm had a more balanced offense. Stewart had 37 points in the series opener and Jewell Loyd added 28 in that game.

On Sunday, the Storm had five players in double figures. Natasha Howard and Alysha Clark added 21 each to go along with Stewart and Bird’s efforts. Jordin Canada added 10 points off the bench.

The Storm took over after Las Vegas had rallied from a 13-point deficit in the first half to take a 65-64 lead with 3 minutes 22 seconds left in the third quarter.

Seattle scored 22 of the next 30 points over the next six minutes to go up by double-digits again with Loyd ending the burst with a 3-pointer that made it 86-73 with just under seven minutes left. Las Vegas did not respond.

A’ja Wilson had 20 points to lead Las Vegas, while Angel McCoughtry and Emma Cannon added 17 each. Cannon provided a spark off the bench for the Aces, who were missing the sixth woman of the year, Dearica Hamby, because of a knee injury.

Seattle held a 48-42 halftime lead behind 12 points from Stewart and Clark. The Storm, who had 17 assists on their 18 baskets, built the lead to 13 before Las Vegas rallied to the 6-point halftime deficit.

The NFC East will come down to this

Mike Tyson to Fight Roy Jones Jr. No, Not in a Retirement Home

N.B.A. Season Like No Other: ‘One of the Worst, Strangest Years’