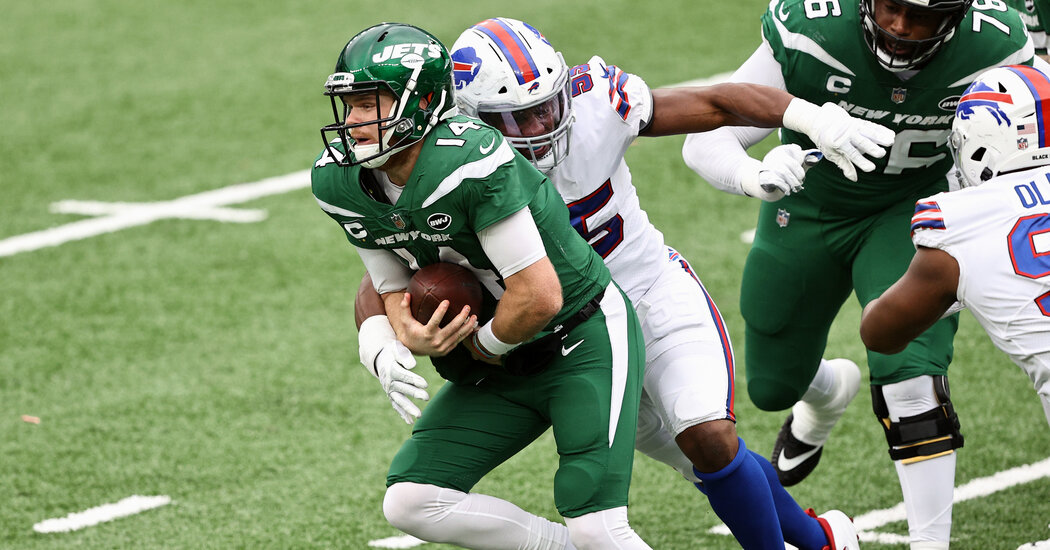 EAST RUTHERFORD, N.J. — Josh Allen and the Bills were held out of the end zone for the first time this season, but Tyler Bass tied a franchise record with six field goals to help Buffalo snap a two-game losing streak with an 18-10 victory over the winless Jets on Sunday.

It was the third game in 13 days for the Bills (5-2), who lost to Tennessee and Kansas City before their ugly win against the league-worst Jets (0-7).

The Bills fell behind by 10-0 early and looked sluggish for most of the game. The victory was the franchise’s first without a touchdown since it beat Washington, 17-16, in 2007. It was the first time the Jets lost without allowing a touchdown since a 9-6 loss to the Los Angeles Rams in 2016.

The Jets had a chance late after Micah Hyde was called for an unnecessary hit on Breshad Perriman, who appeared unconscious for a few moments. The penalty put the ball at the Jets’ 32-yard line. But Sam Darnold was intercepted by Jerry Hughes on a tipped pass to seal the game.

Jets Coach Adam Gase said the team was looking for anything that might help it get a victory. So he handed off the offensive play-calling to coordinator Dowell Loggains — and it seemed to give the Jets an early spark.

Darnold, making his first start after missing two games with a sprained AC joint in his right shoulder, marched the Jets down the field before the drive stalled in the red zone. Sergio Castillo booted a 29-yard field goal — his first N.F.L. kick in place of the injured Sam Ficken — to give the Jets a 3-0 lead.

The Jets’ second drive also stalled in the red zone, with La’Mical Perine getting stuffed for a 1-yard loss on fourth-and-1 from the Bills’ 18.

The Jets defense made a big play on Buffalo’s second possession. On third-and-goal from the 14, Tarell Basham sacked Allen and caused a fumble that John Franklin-Myers recovered. The Jets capitalized, with Perine reaching for the pylon on a 5-yard touchdown run that put them up 10-0 midway through the second quarter. It was the Jets’ largest lead of the season.

Bass kicked a 53-yarder with 2:42 left before halftime to cut the Bills’ deficit to 10-3. He added a 48-yarder as time expired in the opening half after Dane Jackson intercepted Darnold, who had thrown into heavy coverage.

Andre Roberts returned the kickoff to start the second half 58 yards to get the Bills in good position, but they had to settle for a 46-yarder by Bass to make it 10-9.

Buffalo took a 12-10 lead on Bass’ 37-yard field goal with 1:37 left in the third quarter, but could have had more. Allen found Gabriel Davis open in the end zone for a 22-yard touchdown, but it was negated by an illegal formation penalty.

Darnold was 12 of 23 for 120 yards and the two interceptions. The rookie receiver Denzel Mims had four catches for 42 yards in his N.F.L. debut.

The Bills host New England next Sunday, while the Jets will be at the defending Super Bowl champion Kansas City.