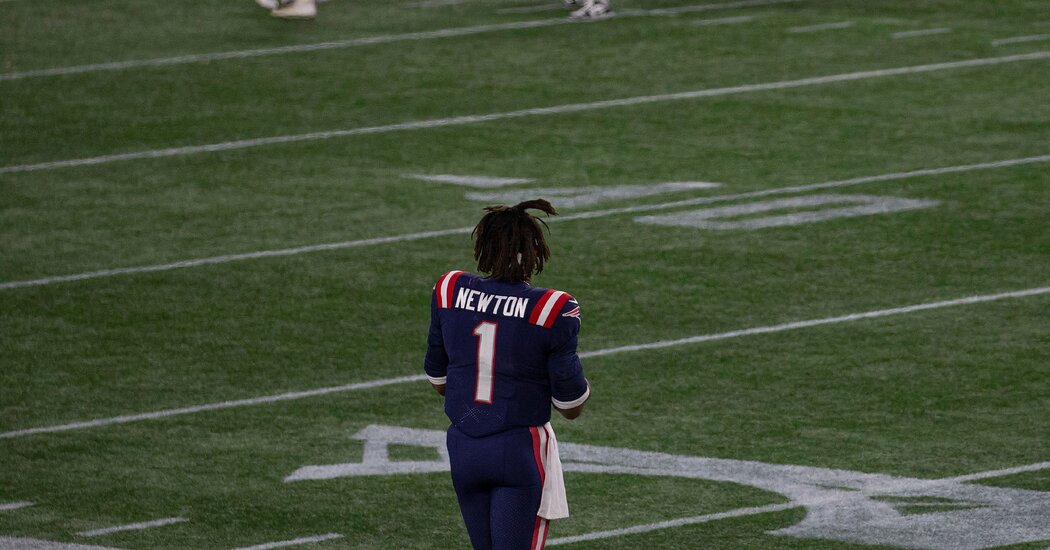 Late last season, the New England Patriots were 10-1 and considered a favorite to win a seventh Super Bowl. The team’s downfall since then has been beyond striking, and not just because the Patriots have won only four of their last 12 games after Sunday’s 33-6 thumping at the hands of the San Francisco 49ers.

Consider this: After New England takes its 2-4 record to Buffalo this coming weekend, Patriots Coach Bill Belichick might be in the mood for a roster fire sale on the eve of the N.F.L.’s Nov. 3 trade deadline. Giving up might not be the Patriot Way, but neither is pigheaded determination when sagacious rebuilding would be more shrewd. Belichick has player assets, like All-Pro cornerback Stephon Gilmore, that could fetch a first-round pick.

It would be an uncomfortable act of desperation, but it could not be more humiliating than what the Patriots lived through Sunday when a 27-point loss was not the only indignity.

On Sunday, one quarterback that the Patriots traded, San Francisco’s Jimmy Garoppolo, came back to Foxborough, Mass., and thoroughly trounced his former team. Nearly 3,000 miles away in Las Vegas, the other quarterback the Patriots let get away, Tampa Bay’s Tom Brady, threw four touchdown passes to keep his Buccaneers in the Super Bowl hunt at 43 years old.

Oh, and Brady was heaving bombs to ex-Patriot tight end Rob Gronkowski, who caught five passes, one for a touchdown on a nifty Brady throw.

Worse, there was more than the obvious symbolism at work. New England’s defense, ranked No. 1 in the league late in 2019, is in tatters and gave up 467 yards of offense to the 49ers. Imagine how that felt for Belichick, who may be the best defensive coach in N.F.L. history. Sunday’s rout was also the largest home defeat in Belichick’s New England tenure and the first time since 2002 that the Patriots lost as third consecutive game.

“We didn’t perform well enough in any area — offense, defense, special teams, running, passing, defending the run, defending the pass, ball security, tackling, blocking,” said Belichick, who is often most frank when he is most upset. “None of it was good enough. Maybe I left something out.”

No, that would seem to pretty much sum it up.

Belichick, however, continued: “We were clearly out-coached, outplayed. Just out-everything.”

After the game, Newton said he knew what was ailing the Patriots. A reporter asked: “What is the issue?”

Answered Newton: “Me not playing good.”

Later, Newton, who continued to take the blame for the loss, elaborated: “The energy has definitely been off for me, and at times it’s not rewarding when you’re just going out there with this aura about yourself that’s not you.”

He added: “I have fun playing this football game, but the performances here hasn’t been somewhat delightful for me to have fun in doing so. So I just got to be better.”

If the Patriots were understandably morose, the 49ers (4-3) were delirious about reviving their season with successive victories.

A smiling Garoppolo conceded that returning to play in Foxborough was more than just another road game for him.

“Coming back here, seeing the same stadium, hearing the same songs they used to play — a lot of memories came back,” he said. “A lot of emotions out there. But it was a fun night.”

Garoppolo, who was twice intercepted but completed 20 of 25 passes for 277 yards, also likes the way San Francisco has earned its last two victories.

“We’re in a good spot right now,” he said. “It’s just a mindset that we have as a group. You could feel it — I felt it in the locker room today from the guys.”

Meanwhile, 49ers Coach Kyle Shanahan, while professing his utmost respect for Belichick, said he felt like it was an easy night for him, especially since his team had 197 rushing yards on 43 carries.

“The way our O-line was playing,” Shanahan said. “It’s a pretty easy game for me to just sit back and watch our guys.”

If the 49ers seem to be heading in a positive direction in the talented N.F.C. West, how the Patriots will proceed from here is anyone’s guess.

Might an unforeseen resurrection begin this weekend in Buffalo? Perhaps. Countless times in previous seasons it has been a mistake to underestimate Belichick’s resourcefulness as a coach. Newton is a former league M.V.P. and could certainly rebound. The Patriots, who have had to weather the departure of several veterans who chose not to play this season because of the coronavirus pandemic, might develop the cohesion and consistency they currently lack with more time together.

But Sunday evening, things looked dire. In the final minutes, Newton sat on the home bench repeatedly shaking his head side to side, an expression of disbelief on this face. Wide receiver Julian Edelman, New England’s resolute, usually indomitable presence, was seated next to him. Edelman’s eyes were blank, which nearly matched his entry on the game’s score sheet, which read: one reception for 13 yards.

Newton’s back-up Jarrett Stidham was on the field, throwing another Patriots interception. Belichick, who after the game insisted he was not contemplating a change at quarterback, walked over and patted Newton on the leg as if to say: “Hey, we’ll climb out of this hole; there will be better days.”

As Belichick turned his back, Newton resumed shaking his head side to side.