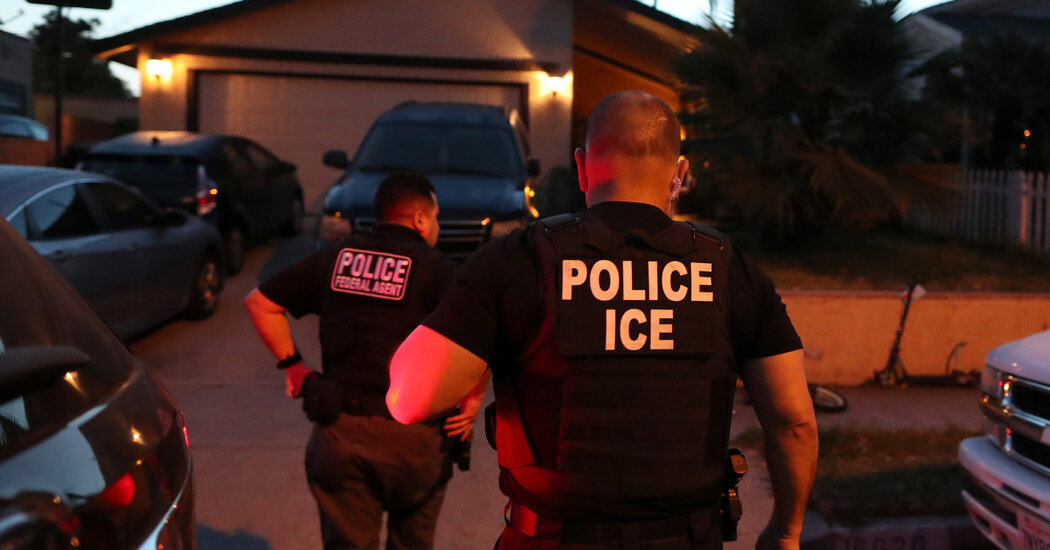 LOS ANGELES — For Alicia Flores Gonzalez, Aug. 4 began like any other day. She dropped her little girl at day care and drove to work at a winery in the Sonoma Valley. But as she was parking her white Toyota Tacoma, she found herself surrounded by several armed men. “What happened? What did I do?” Ms. Flores recalled asking them.

“Hands up! Turn around,” ordered one of the men, who shackled her and escorted her to a van.

Six agents from Immigration and Customs Enforcement in three unmarked vehicles had been deployed to arrest her. Within 24 hours, the 43-year-old single mother of four U.S.-born children had been deported to Mexico. She had lived without legal permission in the United States for 27 years.

Ms. Flores was seized during a new nationwide enforcement operation announced this month, the first large-scale arrests and deportations in the interior of the country since the coronavirus pandemic halted field operations for several months. Since mid-July, immigration agents have taken more than 2,000 people into custody from their homes, workplaces and other sites, including a post office, often after staking them out for days.

In Los Angeles, agents made 300 arrests. More than a thousand others were rounded up in New York, Atlanta and Phoenix, as well as in cities in Colorado, Idaho, Montana, Nevada, New Jersey, Utah and Wyoming.

President Trump has made curbing immigration a cornerstone of his agenda. He has blocked most asylum seekers and refugees, built 300 miles of border wall and invoked the health crisis to seal the border to nonessential travelers.

During the Republican National Convention, he reiterated his pledge to clamp down on illegal immigration, and his re-election campaign has emphasized the restrictive immigration agenda that was central to his platform in 2016. A recent television ad airing in battleground states said that former Vice President Joseph R. Biden Jr.’s support for offering a path to citizenship to millions of immigrants unlawfully in the country would undermine Americans by creating more competition for jobs and more beneficiaries of welfare programs.

The United States is home to about 10.5 million undocumented immigrants. Three out of four adults said they favored a pathway to legal status for them, according to a survey in June by the nonpartisan Pew Research Center.

Thirty-two percent of Trump supporters said immigrants strengthen society, up from 19 percent in 2016, according to a Pew survey of voters released on Thursday. While the issue of immigration still appeals to Mr. Trump’s base, concerns about the economy and the coronavirus pandemic animate more voters, strategists say.

The wide-ranging immigration operation, which had been underway for many weeks before it was publicly announced, was touted by officials as a mission designed to capture hardened criminals who were at large.

“The aliens targeted during this operation preyed on men, women and children in our communities, committing serious crimes and, at times, repeatedly hurting their victims,” said Tony Pham, the new interim director of ICE.

“Through our targeted enforcement efforts, we are eliminating the threat posed by these criminals, many of whom are repeat offenders,” he said.

But analysis of the totality of the government’s own data shows that the administration is arresting large numbers of undocumented immigrants whose crimes are minor, or who have not committed any crime at all. These immigrants are easier to locate and remove precisely because they are not trying to evade law enforcement, even if they have outstanding deportation orders.

Ms. Flores has no criminal record but had lost an appeal to stay in the country after she was ordered deported more than a decade ago. Like millions of undocumented immigrants who are quietly living and working in the country, she had managed to avoid arrest, working in Northern California and seeing her children through school.

“My mom has always been a hardworking lady who just minds her business and takes care of my brothers and sister,” said her oldest child, Alex Salinas, 26, who lives in Healdsburg, Calif., with his three siblings. “I am shocked that this happened the way it did.”

In the 2019 fiscal year, federal agents arrested more than 143,000 people in the interior. The most common convictions or criminal charges pending against them were for driving under the influence (74,000), followed by drug offenses (67,000). Only 1,900 had been charged or convicted of homicide.

Under the Trump administration, there has been a steady rise in immigrants detained without a serious record, according to the Transactional Records Access Clearinghouse at Syracuse University, which has compiled data obtained through Freedom of Information Act requests.

TRAC found that a jump in the number of detained immigrants in 2019 was a direct result of arrests of people with no criminal records.

“ICE makes it sound like they are snatching wanted felons off the streets when it conducts these operations,” said Austin C. Kocher, a geographer at Syracuse University who analyzes immigration enforcement data.

“We don’t get a full picture,” he said. “They downplay the large numbers of people detained and deported who committed minor offenses, usually a long time ago, or who had no crime on record.”

Of the 50,000 people in immigrant detention facilities on the last day of April 2019, nearly two-thirds had no criminal record, up from 40 percent four years earlier, under the administration of President Barack Obama, according to TRAC. Among detainees who had committed crimes, a higher percentage had been convicted of infractions such as driving without a license or immigration violations; a lower proportion of detained immigrants had committed violent crimes than before.

The most recent deportation data available, for the first five months of the 2020 fiscal year, shows that 52 percent of those removed from the country had no criminal record, according to TRAC, up from about 40 percent in each of the previous three fiscal years.

In its second term, the Obama administration put into place a policy of discretion that spared immigrants who were long-term residents of the United States, especially if they had American children and had not run afoul of the law, even if, like Ms. Flores, they had outstanding removal orders.

The impact of the pandemic on ICE’s ability to hold immigrants in detention could have played a role in the agency’s targeting of immigrants like Ms. Flores, who can be rapidly bused out of the country because she is Mexican.

Katie Kavanagh, a lawyer with the Rapid Response Network of Northern California, which provides emergency legal assistance to people detained by ICE, said that in the span of five work days in early August she handled the cases of four Mexicans arrested in California’s wine country.

“ICE was going after people who they quickly could deport,” said Ms. Kavanagh, who was contacted by Ms. Flores’s employer. “They were low-hanging fruit. They were the most legally vulnerable.”

Among them was a Mexican man who had missed an immigration hearing because his lawyer had not notified him and a grandmother who was arrested outside a post office after missing a hearing because of a family tragedy. Ms. Kavanagh filed motions to reopen their cases, which were granted by a judge.

Ms. Flores came to the attention of immigration authorities around 2008, when she landed in a local jail after a brawl with her former partner. The episode set in motion deportation proceedings. In 2012, she lost her appeal to remain in the country.

Like many other undocumented immigrants, she did not leave.

In Healdsburg, she had been working two jobs, cleaning the winery and a clinic. Feeling relatively secure, she had recently retired her 2002 Honda sedan and made a down payment on a 2020 Toyota truck.

On Aug. 4 at about 10 a.m., her eldest son, a carpenter, was at work when he received a call from his distraught mother informing him that she had been taken away.

“She was scared,” Mr. Salinas recalled. “I was scared. We didn’t know what was going to happen. She told me to pick up my little sister at day care. She was worried Child Protective Services would take her.” His sister Kimberley is 5 years old.

A couple of hours later, he answered a call from Ms. Kavanagh, who had met Ms. Flores in San Francisco at the ICE processing center. After assessing her case, she had concluded that nothing could be done to prevent her deportation.

Mr. Salinas shoved some clothes and $250 into a backpack and rushed to San Francisco to bid his mother goodbye.

Their brief encounter happened in a no-contact visitation room. Separated by a glass panel, mother and son spoke to each other through phones. She arrived in Tijuana at dawn.

Only deportees who can prove that their absence causes hardship to a spouse or parent — a child does not count — are eligible for an exemption from a 10-year bar to re-entering the United States, so Ms. Flores is unlikely to be allowed back unless there is a change in the law.

“I am thinking of my children, nothing more,” she said, breaking down during a telephone interview from Mexico. “I worry for them. We have never been apart. I hope I can go back.”

Ms. Flores’s oldest son has picked up his mother’s evening job, cleaning the clinic. He is completing paperwork to obtain guardianship of his three siblings.

“We feel emptiness because the most important person in the family is missing,” Mr. Salinas said. “On top of that, I have to figure out all the new responsibility.”

This Contact Tracer Is Fighting Two Contagions: The Virus and Fear

Larry Pardey, Mariner Who Sailed the World at His Leisure, Dies at 81