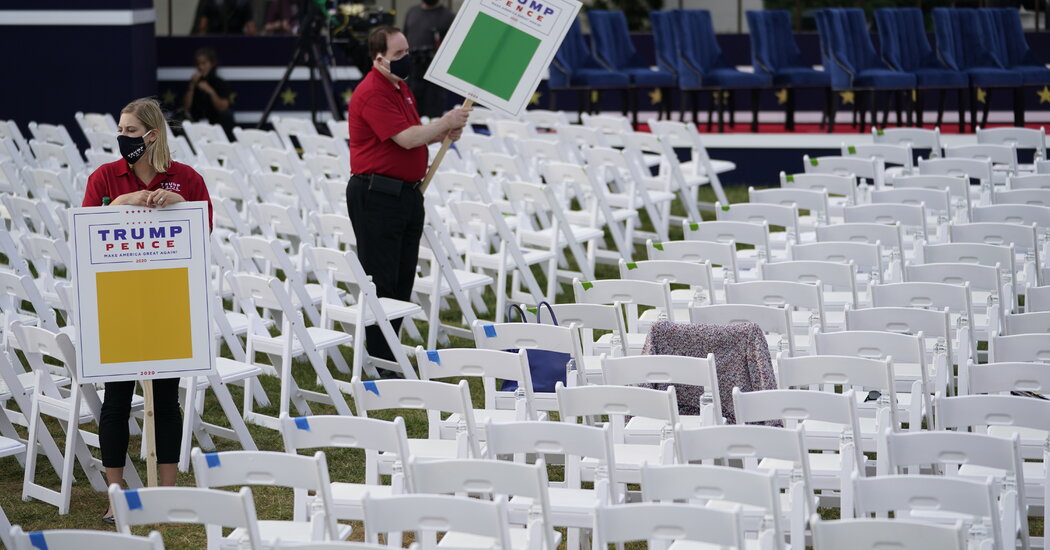 President Trump will speak Thursday night in front of a large crowd sitting closely together on the South Lawn of the White House without significant social distancing, according to photos of the event space taken Thursday afternoon.

About 1,500 white folding chairs with roughly a foot between them have been set up facing the lectern where Mr. Trump will speak, formally accepting his party’s nomination for another four years in the White House on a day when the death toll from the coronavirus in the United States topped 180,000.

Officials at the Republican National Committee, which is producing the convention, declined to respond to questions about whether members of the audience would be required to wear masks or would be tested for Covid-19 before being allowed onto the White House grounds for the final night of speeches.

In a statement, the campaign noted that it had worked with Patronus Medical, a safety and health company, to “make certain proper protocols are in place to ensure the safety and well-being of individuals at convention venues.” It added that representatives of the company had been on site to make sure screening “meets the highest standards of public safety.”

But at previous convention events this week, attendees have mingled closely without masks, generating criticism from public health officials about the possibility that the virus could be spreading quickly through the crowds.

“This is deeply irresponsible,” Ashish K. Jha, the director of the Harvard Global Health Institute, said of the images on Thursday. “It goes against all that we know about keeping people safe. We should expect better from our national leaders.”

On Wednesday, Vice President Mike Pence spoke at Fort McHenry in Baltimore in front of a crowd where people were seated close together. Most of the members of the audience did not appear to be wearing masks at the event. On Tuesday, Melania Trump, the first lady, also spoke before a smaller but largely maskless crowd seated close together in the Rose Garden.

Gary Pettus Dies at 70; Used Skills ‘To Bless the Lives of People’

Why Ruth Bader Ginsburg Wasn’t All That Fond of Roe v. Wade

‘It’s Like Having No Testing’: Coronavirus Test Results Are Still Delayed