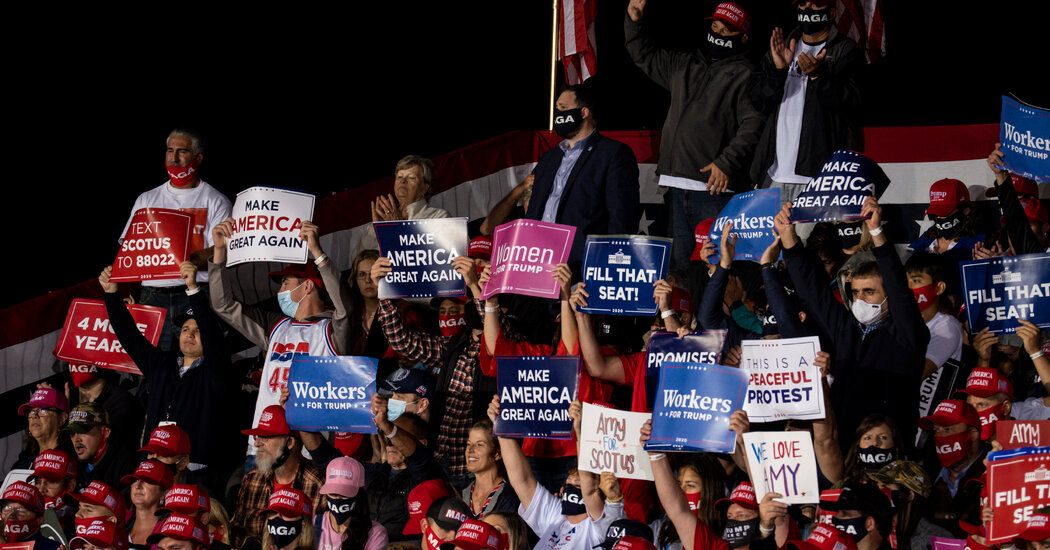 The Trump campaign is not changing its advertising or messaging, even with the candidate in the hospital. The political operation is not bereft of leaders; the campaign manager is still helping run things from afar after testing positive for the virus. Advisers are not showing any evidence of worry, despite public polls showing President Trump still behind in key states he won in 2016.

On the first weekend of the new Trump political reality, the overarching signals were about continuity and resolve, even though the landscape was one of change: rallies canceled in Wisconsin, fund-raising reworked without the incumbent candidate and campaign operations adjusting on the fly.

At 4 p.m. on Saturday, Vice President Mike Pence held a call with the Trump-Pence re-election staff nationwide, trying to rally the troops and lay out the plans for the coming weeks.

Despite the almost unthinkable circumstances for a campaign whose fund-raising, events and political pitches have all been driven by the president himself, Mr. Pence tried to signal that the campaign was trying to proceed as if little has changed.

Matt Gorman, a Republican strategist, said the campaign’s only option was to plow forward.

“The leader of the campaign may be off the field for now,” he said. “But people are voting right now. The blocking and tackling of knocking doors, making phone calls and getting people to the polls must continue. They can’t worry about what they can’t control and must work relentlessly at what they can.”

To compensate for Mr. Trump’s absence, the campaign is trying to deploy as many Trump family members, who are popular with the president’s supporters, as is possible while the president is off the trail.

Justin Clark, the deputy campaign manager, is filling in at the headquarters in Virginia for the campaign manager, Bill Stepien. But Mr. Stepien is working remotely from home, officials said, and telling other staff members that he feels fine. He participated on the call with staff members across the country on Saturday. (Jared Kushner, the president’s son-in-law and a top political adviser, has not needed to play a greater role in the candidate’s absence.)

The campaign hopes to be able to tell a story of what one adviser described as “resolve,” with the president — and several top aides — overcoming a virus that Mr. Trump has for months played down.

China’s Mars Launch: When to Watch