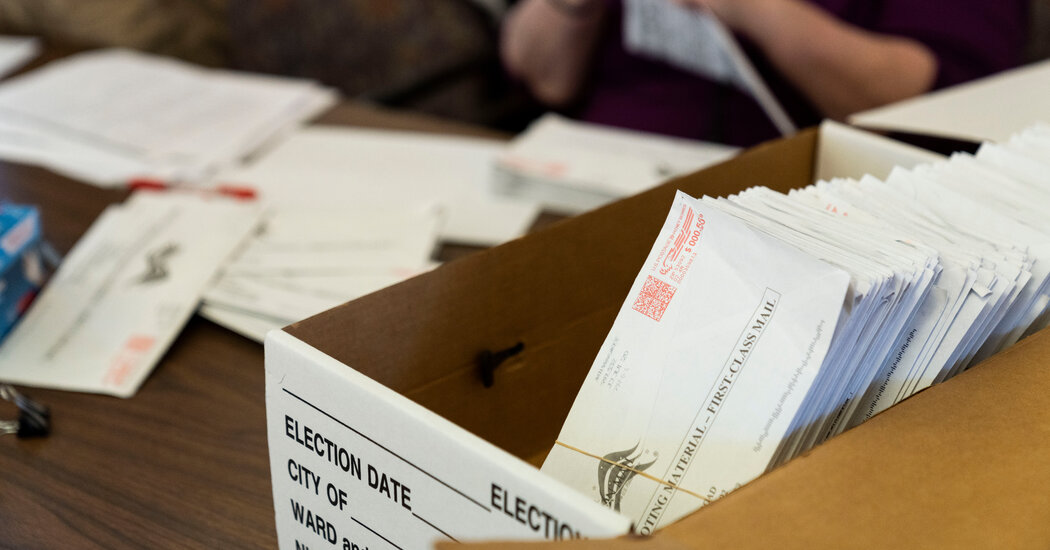 One of the most valuable pieces of real estate on the internet will soon promote vote by mail to a broad audience of up to 70 percent of American adults over the next 82 days.

As part of Facebook’s new “voter information hub,” the biggest social network in the world will prompt users in states that allow mail-in ballots with reminders and links about registration deadlines, ballot request deadlines and how to submit a ballot.

The hub is Facebook’s latest push to expand access to voting information ahead of the 2020 election. Election Day is Nov. 3, but mail-in voting and early voting will be possible for weeks sooner.

Facebook has already set a goal of registering over four million new voters. Though the hub will be its own self-contained landing page on Facebook, the company will feature prompts and reminders at the top of Facebook and Instagram feeds to highlight key deadlines, including for vote by mail.

Facebook has often shied away from any confrontation with President Trump over his rhetoric and use of the platform, but the promotion of vote by mail is likely to set up a clash with the president. Mr. Trump routinely condemns voting by mail, falsely labeling it as corrupt, in a relentless attempt to politicize the method.

“It really was not a political decision, to be honest,” said Emily Dalton Smith, the head of social impact at Facebook. “Supporting vote by mail is really about making sure that people have the information and tools they need to participate in elections, make their voices heard, hold our leaders accountable. And it’s not specific to politics at all. It just came from the principle of what is right for our community.”

Other tech companies are expanding their civic footprint as well. Last week, Snap, the company behind the popular social media app Snapchat, announced that it would begin a major effort in early September to register first-time voters within its app and to guide them through the ballot process.

Twitter is also planning new tools, policies and voting resources over the next month that will help users find information on how to vote during the coronavirus pandemic, including promoting mail and alternative early voting options.

“Ahead of the 2020 U.S. election, we’re focused on empowering every eligible person to register and vote through partnerships, tools and new policies that emphasize accurate information about all available options to vote, including by mail and early voting,” said Jessica Herrera-Flanigan, the vice president for public policy for the Americas at Twitter.

Mr. Trump frequently uses his Facebook page, where he has 28.7 million followers, to falsely attack voting by mail. The posts have not been taken down by Facebook, but the site recently started to add a link to “get official voting info” below such posts, which will now link to vote-by-mail facts or other information in the voter hub.

Though Facebook has offered similar voter engagement tools in the past, the company’s position in politics is a double-edged sword: Facebook is often considered the most critical tool in a campaign’s arsenal for advertising and fund-raising, but it has also come under intense criticism for taking a completely hands-off approach to policing falsehoods in political ads on its platform.

And the wounds of 2016 — when Facebook was gamed by foreign actors in Russia to interfere in the election, including a voter suppression campaign targeting Black voters — are still fresh.

The company said in a blog post that the new information center would be used to help combat the spread of disinformation, with an eye toward a likely delay in results on Election Day owing to a surge of mailed ballots.

The tool will also help to recruit and register poll workers around the country, in an attempt to augment the shortages facing many municipalities as poll workers, often older and in high-risk categories for the coronavirus, have been opting not to work recent elections.

Facebook’s support for mail-in balloting is a recognition that the coronavirus is likely to continue to disrupt the country’s rhythms well through November.

“We started thinking a lot about vote by mail, because in the context of Covid it is becoming even more important,” said Ms. Smith. “And our guiding principle has been that we just need to give people the information that they need to vote and share their voices.”

“I’m grateful that they’re doing it on Aug. 12 and not Oct. 21,” said Amber McReynolds, a former election official from Colorado and the current chief executive of the National Vote at Home Institute, which promotes voting by mail. “Facebook has done this for voter registration day before and it drives traffic significantly, so I absolutely think it will make a big difference.”