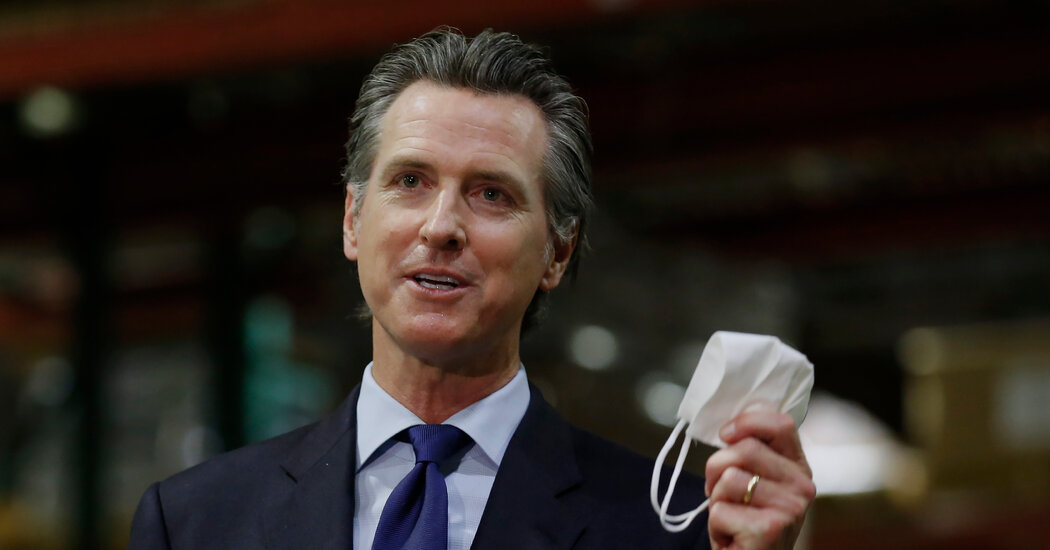 SAN FRANCISCO — It was an intimate meal in a wood-paneled, private dining room in one of California’s most exclusive restaurants. No one around the table wore masks, not the lobbyists, not even the governor.

[Sign up for California Today, our daily newsletter from the Golden State.]

Photos that surfaced this week of a dinner at the French Laundry, a temple of haute cuisine in Napa Valley where some prix fixe meals go for $450 per person, have sparked outrage in a state where Democratic leaders have repeatedly admonished residents to be extra vigilant amid the biggest spike in infections since the pandemic began.

Gov. Gavin Newsom, who attended the dinner with his wife, has apologized, calling it a “bad mistake.”

But that has not assuaged his critics, who point to a cascade of other instances when Democratic leaders in California have been caught flouting the state’s coronavirus orders and guidelines. The revelations come as Mr. Newsom and other officials have asked Californians to make sacrifices to stop the spread of the virus, most recently beseeching them to stay home and avoid visiting extended family over Thanksgiving.

This week state lawmakers came under fire for their slow response in explaining how they ended up at a conference held at a resort in Maui, Hawaii, just as California issued explicit guidance on avoiding “nonessential travel to other states or countries.” The conference was organized by the Independent Voter Project, a nonprofit organization, and asked lawmakers in attendance, including 14 from California, to focus on the theme of reopening economies amid the pandemic.

And Republican adversaries across the nation are still making hay from the images that showed Speaker Nancy Pelosi in a hair salon in San Francisco in violation of the city’s rules that barred salons from operating indoors. Ms. Pelosi said it was a setup by the owner of the salon, who made public the footage from security cameras.

More recently Ms. Pelosi and Dianne Feinstein, the state’s senior senator, have both come under fire in Washington for what was described as coronavirus imprudence.

Ms. Pelosi was forced to cancel a stately dinner in the Capitol for newly elected representatives last week after details of the meal in a windowless hall circulated on social media.

On Tuesday, footage emerged of Ms. Feinstein, 87, walking through the corridors of Congress without a mask. The video was widely circulated on social media a day after California issued expanded orders for residents to wear face coverings when they are outside of the home, with few exceptions.

With California experiencing its sharpest surge in infections since the beginning of the pandemic, a 51 percent increase in one week, the state has imposed some of the tightest restrictions in the nation, closing businesses and ordering that masks be worn at all times outdoors.

While lawmakers and governors in other states have flouted social distancing guidelines, the instances in California, a state that has prided itself on its early and aggressive actions to mitigate the virus, have felt more jarringly hypocritical. The juxtaposition between the strict orders and the behavior of lawmakers has undercut a defining message of prudence that the state’s Democrats have sermonized throughout the crisis. And it has generated biting criticism from adversaries and cynicism from residents frustrated by the months of coronavirus restrictions.

The dinner at the French Laundry, the existence of which was initially reported by The San Francisco Chronicle, was hosted by a prominent California lobbyist, Jason Kinney. The photos of the gathering, taken by a diner at a nearby table and shared with a local television station, also showed the chief executive for the California Medical Association and the organization’s top lobbyist. In a statement, a spokesman for the association, which represents and lobbies for some 50,000 California physicians, said that the two attended as friends of Mr. Kinney and that “the dinner was held in accordance with state and county guidelines.”

Mr. Newsom on Monday described the dinner as taking place outdoors. But the photos show a table indoors with a glass sliding door that opens to a courtyard. On Wednesday a spokesman for Mr. Newsom, Nathan Click, said the governor had no further comment.

“The spirit of what I’m preaching all the time was contradicted and I’ve got to own that,” Mr. Newsom said during a lengthy mea culpa on Monday. “I need to preach and practice. Not just preach.”

The dinner party has put a spotlight on the governor’s wealth and lifestyle. In a 2019 review of the French Laundry and two other Napa restaurants, the New York Times critic Tejal Rao described being “overwhelmed by the opulence” and feeling as if transported onto a “spaceship for the 1 percent, now orbiting a burning planet.” Mr. Newsom said in October that his children, who attend private school, returned to in-person classes even as most of the state struggles with remote learning.

“Newsom and the first partner eschewed state public health guidelines to dine with friends at a time when the governor has asked families to scale back Thanksgiving plans,” wrote the Sacramento Bee editorial board on Friday. It added, “If the governor can eat out with friends — and if his children can attend their expensive school — why must everyone else sacrifice?”

Who Will Miss the Coins When They’re Gone?

The Census, the Supreme Court and Why the Count Is Stopping Early: Explained

How the 2020 Election Could Hinge on the Voting Process Itself