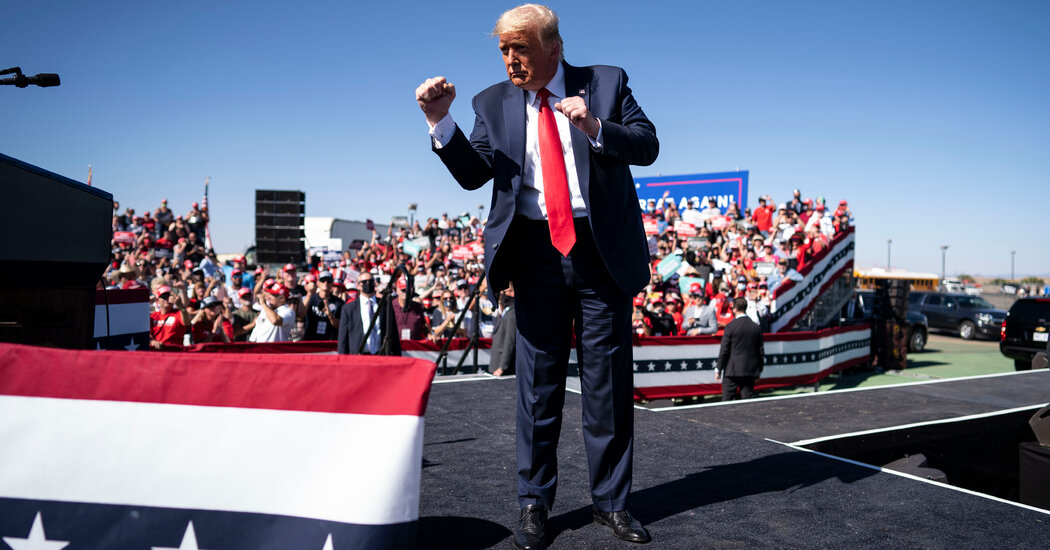 President Trump told voters in Arizona that Americans are “getting tired of the pandemic” and accused the news media of exaggerating the crisis, as he sought to make up ground in a traditionally Republican state where the virus is making a comeback.

“You know why? They’re trying to talk people out of voting,” Mr. Trump added. “People aren’t buying it, CNN, you dumb bastards,” he said to cheers.

His dismissive remarks about the coronavirus echoed earlier ones he made Monday morning in a call with members of his campaign.

“People are tired of Covid,” Mr. Trump had complained on the call, to which several reporters had been invited. “I have the biggest rallies I’ve ever had. And we have Covid. People are saying: ‘Whatever. Just leave us alone.’ They’re tired of it.”

He added, “People are tired of hearing Fauci and these idiots.”

After landing in Arizona, Mr. Trump complimented its Republican governor, Doug Ducey, saying that the state was “really in great shape” despite the fact that infections are again on the rise there. Arizona has had 231,910 coronavirus cases, the eighth-highest total in the nation, according to a New York Times database. Over the past week, there have been an average of 796 cases per day, an increase of 58 percent from two weeks ago.

Speaking in Prescott, Mr. Trump boasted that he had rescinded a 2015 initiative requiring localities to create detailed plans to remedy racial segregation in housing. “It allows low-income housing to be built, right next to your American dream,” Mr. Trump said. “What ultimately it means is crime will come pouring in.”

“I’ve watched it for years,” he added. “You’ve all watched it, right? Where they destroy these incredible communities.”

He again harped on that message at a second rally in Tucson. “I kept hearing that women from the suburbs won’t like Trump,” he said. “I said, ‘Why because I’m stopping crime?’ You’re gonna have the suburbs be safe.”

Recent polling has shown Mr. Trump’s Democratic rival, Joseph R. Biden Jr., with a lead of as much as eight percentage points in Arizona, a traditionally Republican state that is growing more Democratic. Early voting has been underway in the state for nearly two weeks.