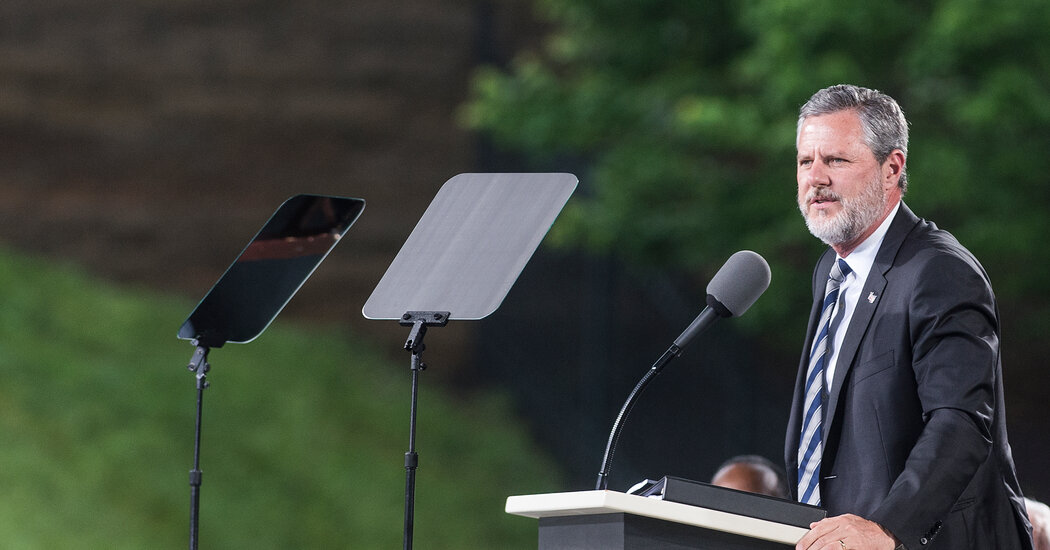 Jerry Falwell Jr., one of President Trump’s most prominent and controversial evangelical supporters, will take an indefinite leave of absence from his role as president and chancellor of Liberty University, the board of trustees announced on Friday.

The news comes days after Mr. Falwell posted, and then deleted, a photograph on Instagram of him posing alongside a woman with his pants unzipped and his arm around her.

Mr. Falwell did not immediately respond to a request for comment. Earlier in the week, he apologized for the photo.

Mr. Graham said he had not spoken with Mr. Falwell about the photograph or his leave.

About the photograph, Mr. Graham said: “All of us in life have done things that we’ve regretted. I think he certainly has regretted that. It was a foolish thing.”

Under the Falwell family’s leadership, Liberty has grown in five decades from a modest Baptist college to an evangelical powerhouse with cash investments and endowments of nearly $2 billion, nearly 46,000 undergraduates and a campus that sprawls across Lynchburg and neighboring counties in Virginia.

The university was founded by Mr. Falwell’s father as a bastion of social conservatism, one that was unabashedly assertive as it trained what it called “Champions for Christ.”

The decision for Mr. Falwell to take a leave of absence was made by the executive committee on behalf of the full board, but not all members of the board were contacted in advance of the decision, according to one board member who declined to speak publicly.

In the photograph, both Mr. Falwell and the woman have their pants unzipped. His hand is close to her chest. “More vacation shots,” the post said. “Lots of good friends visited us on the yacht. I promise that’s just black water in my glass.”

Mr. Falwell responded to criticism of the photo earlier this week in an interview with WLNI, a local Lynchburg radio station. “Yeah, it was weird. She’s pregnant. She couldn’t get her pants zipped and I was like trying to like … I had on a pair of jeans I haven’t worn in a long time and couldn’t get zipped either. So, I just put my belly out like hers. She’s my wife’s assistant, she’s a sweetheart. I should have never put it up and embarrassed her. I’ve apologized to everybody. I promised my kids I will try to be a good boy from here on out.”

A now-deleted video of a party on the yacht, titled “Trailer Park Boys,” showed Falwell family members and friends in costumes in an apparent reference to the Canadian mockumentary series.

Students from Liberty expressed outrage about the photo on social media. Several pointed out that it was in direct violation of the school’s code of conduct.

On Thursday, Representative Mark Walker, Republican of North Carolina and a former instructor at Liberty, wrote on Twitter that Mr. Falwell’s “ongoing behavior is appalling.”

“I’m convinced Falwell should step down,” he wrote.

Mr. Falwell is a member of the board’s executive committee. Members of the board include his brother, Jonathan Falwell, who leads Thomas Road Baptist Church in Lynchburg; and Mr. Graham’s son William F. Graham IV.

Mr. Falwell has been involved in a number of controversies in recent years.

In May he tweeted Blackface and Ku Klux Klan imagery, prompting demands for his firing and resignations of at least four Black faculty and staff members.

In April a student filed a class-action lawsuit against Liberty over how it has handled the coronavirus pandemic.

Last year the former editor of the Liberty student newspaper wrote an op-ed in The Washington Post calling Mr. Falwell out for silencing students and faculty who spoke out against his support of Mr. Trump.A spokesman for Liberty University did not immediately respond to a request for comment.

Mr. Trump and Vice President Pence have spoken at Liberty in recent years.

Congress subpoenas a Bannon ally who oversees a U.S. media agency over concerns of politicization.

With the Biden-Harris Ticket, Environmental Justice Is a Focus

Talking to Long Beach’s Mayor, a ‘Next Generation’ Democrat