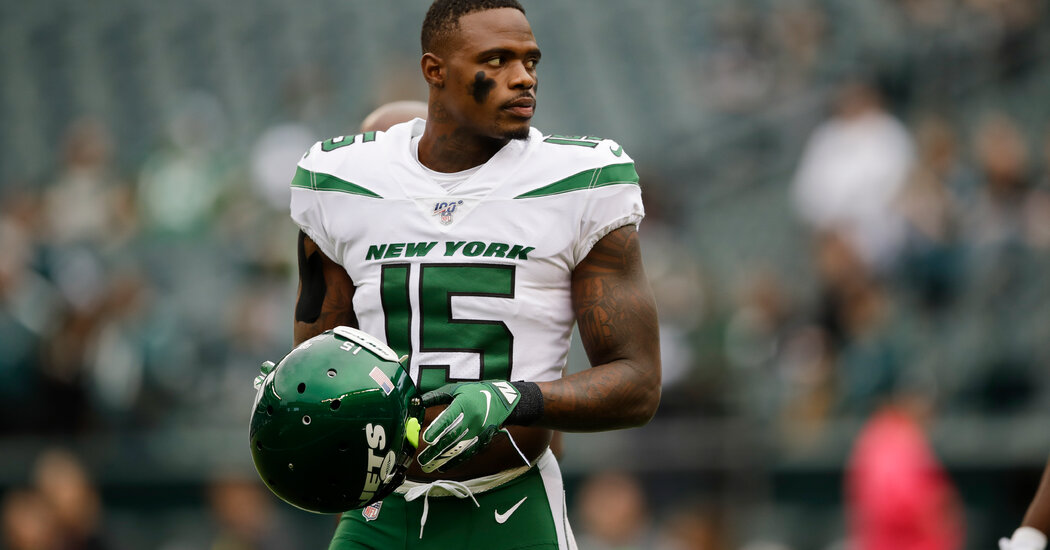 A wide receiver who was cut from the New York Jets on Tuesday has been charged with fraudulently obtaining a $1.2 million loan from the Paycheck Protection Program and using the proceeds to buy luxury goods, prosecutors said on Thursday.

The former player, Joshua J. Bellamy, 31, was charged with wire fraud, bank fraud and conspiracy to commit wire fraud and bank fraud, prosecutors said. He was arrested on Thursday morning and made an initial appearance via Zoom in federal court in Florida.

Mr. Bellamy, of St. Petersburg, Fla., signed with the Jets in 2019 but was sidelined with a shoulder injury in March after playing in seven games. He was cut from the team on Tuesday, according to a Jets spokesman. He had played for the Chicago Bears from 2014 to 2018.

In a federal complaint, prosecutors said that Mr. Bellamy had taken part in a scheme with 10 other defendants who collectively filed at least 90 fraudulent loan applications seeking more than $24 million in coronavirus relief loans. Many of those loan applications were approved and funded by financial institutions, paying out at least $17.4 million, prosecutors said.

Prosecutors said Mr. Bellamy had obtained a Paycheck Protection Program loan of $1.25 million for his own company, Drip Entertainment L.L.C., which he used to buy more than $104,000 in luxury goods from Dior, Gucci and other merchants.

Diego Weiner, Mr. Bellamy’s lawyer, said it was “very early in the case, and Mr. Bellamy is presumed innocent.”

“I truly hope the public will give him the benefit of the doubt at this time,” Mr. Weiner said. “All too often professional athletes are taken advantage of by people purportedly acting on their behalf as agents or advisers.”

Michael Grieco, a lawyer for Mr. Augustin, said that the case was new and that “the charges are obviously very serious, and we look forward to learning more about the investigation in the coming weeks.”

“History has shown many times that lawyers making bold statements or deflecting blame too early in federal cases end up eating their words in a change-of-plea hearing, and therefore we have no further comment at this time,” Mr. Grieco said.

The federal complaint against Mr. Bellamy details text messages, bank records and statements that prosecutors said Mr. Bellamy made during an August phone call with an undercover agent posing as an associate of one of the conspirators in the scheme.

During the call, the agent claimed to be able to help Mr. Bellamy have his loan forgiven and to help him obtain a second loan.

When the agent asked Mr. Bellamy how he had spent his loan, Mr. Bellany replied that he was wiring money, withdrawing money and “buying stuff” for his artists who were “doing videos and stuff like that,” the complaint states.

At the end of the call, Mr. Bellamy said he had additional people to refer for loans from the Paycheck Protection Program, including his girlfriend, his mother and his brother, prosecutors said.

The federal government created the Paycheck Protection Program in March as part of the Coronavirus Aid, Relief and Economic Security Act, which was enacted to prevent large-scale job losses as the coronavirus pandemic gripped the United States, forcing businesses to close.

The loans could be forgiven if the funds were used to cover payroll and certain other expenses.

How Will the U.S. Combat Election Day Cyberwarfare? With Paper.

New Rule To Allow Use Of Firing Squads, Electrocution For Federal Executions

Pence heads to Iowa, as Biden and Trump catch their breath and host fund-raisers.