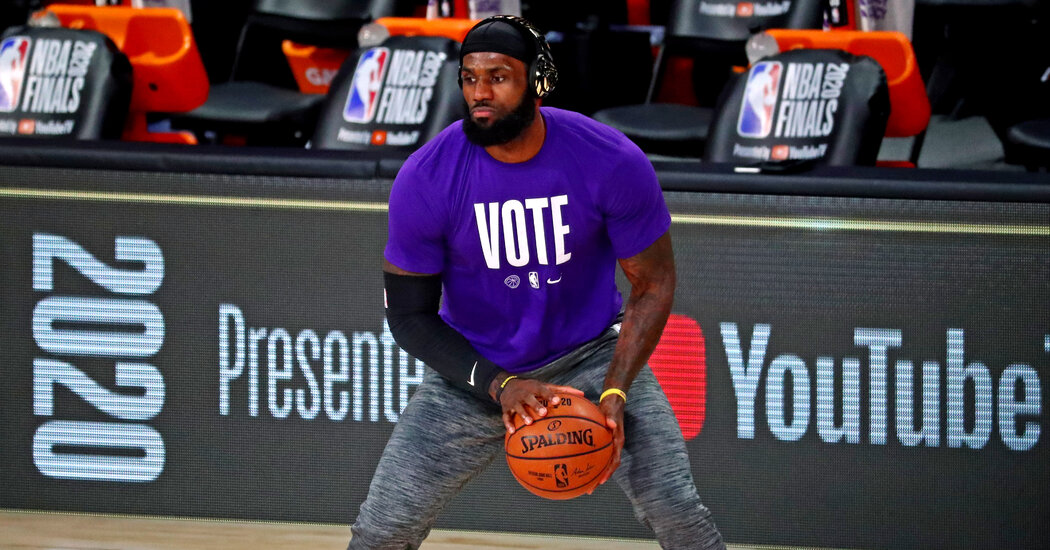 LeBron James, fresh off the Los Angeles Lakers’ championship, is stepping up his political activities on behalf of More Than a Vote, a voter mobilization group that debuted a rapid response operation on Wednesday to combat misinformation among young Black voters.

In an interview, Mr. James talked about the organization’s initiatives, including its recruitment of more than 40,000 poll workers, its efforts to restore voting rights to formerly incarcerated people and a push for N.B.A. arenas to be converted into polling locations.

But there was one topic Mr. James had little appetite to address: President Trump, who dismissed his activism and even his intelligence in a baseless and insulting tweet in 2018 and went on to call him “nasty” during an interview with Rush Limbaugh earlier this month.

More Than a Vote’s latest partnership, a collaboration with the political organization Win Black, will seek to fight the spread of misinformation with voter education campaigns that are headlined by athletes and celebrities and amplified through Snapchat. The announcement came on the same day the group announced new investments in groups that register formerly incarcerated persons in Michigan, Florida, and North Carolina.

Mr. James, who campaigned on behalf of Hillary Clinton in 2016, said has been focused more on issues than candidates in this cycle — less a political decision than a strategy dictated by the rapid pace of events.

The rapid-response initiative will seek to educate younger Black voters on how to spot false political statements spreading on social media. The goal is to provide advice that culminates in young people making a plan to vote — either by absentee ballot or in person.

Called “Under Review,” the effort will be featured on Snapchat through Election Day, and will include videos from celebrities and activists like Desus and Mero, Jemele Hill and the athletes involved in More Than a Vote.

“We believe that Black people, our community, we’ve been pushed away from our civic duty. We’ve been fed misinformation for many years,” added Mr. James, who said his goal is to get young more Black people to the polls.