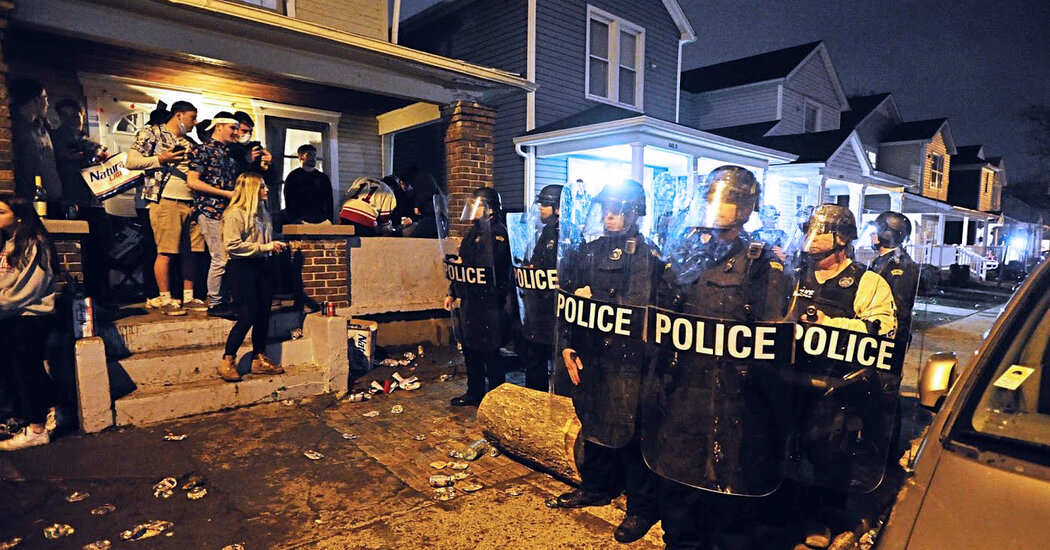 A Maryland man has been sentenced to one year in jail and fined $5,000 for throwing two large parties in violation of the state’s ban on gatherings of more than 10 people.

The man, Shawn Marshall Myers, 42, was convicted on Friday of two counts of failure to comply with an emergency order, the Charles County State’s Attorney’s Office said in a statement.

Judge W. Louis Hennessy of Charles County District Court, who heard the case without a jury, sentenced Mr. Myers to the maximum penalty on one of the counts. He will be on unsupervised probation for three years after his release, prosecutors said.

The trial and sentencing came six months after Gov. Larry Hogan declared a state of emergency and put in place wide-ranging social distancing guidelines to mitigate the spread of the coronavirus.

The State’s Attorney’s Office said that a few others in Charles County had been charged with violating the governor’s order, but that Mr. Myers’s case was the first to have gone to trial.

Mr. Myers was arrested in late March, after the police responded to reports of two large parties five days apart at Mr. Myers’s home in Hughesville, a town of about 2,000 people in Southern Maryland.

The first time, on March 22, Mr. Myers had around 50 people in his home, prosecutors said. They said he was “argumentative” with police officers, but eventually agreed to disband the gathering.

On March 27, the police were called back to Mr. Myers’s house, where more than 50 people had gathered.

“Officers told Myers to disband the party, but again he was argumentative, claiming he and his guests had the right to congregate,” the statement said. Prosecutors said that Mr. Myers was arrested after telling his guests to stay in defiance of the order and refused to cooperate with law enforcement officials despite attempts to reason with him.

Health officials say practicing social distancing is among the most effective tools for stemming the spread of the coronavirus, and many states have prohibited large gatherings to limit contact between groups of people who do not live together.

But that hasn’t stopped people from partying, and as the virus continues to spread — often tied to large gatherings — officials have gone further to stop them in recent months.

Last month, the Los Angeles city attorney charged two TikTok stars, Bryce Hall and Blake Gray, with misdemeanors, contending they threw mega-parties at their Hollywood Hills mansion in defiance of California’s social distancing orders. The charges came shortly after the city shut off the TikTokers’ water to stop the parties and promised to do the same to others who violate the orders.

“It isn’t just about the party,” Mike Feuer, the Los Angeles city attorney, said at a news conference last month. “These individuals who attend your parties could leave and spread it to siblings, to parents, to grandparents, to co-workers, to others in the public.”

Pence heads to Iowa, as Biden and Trump catch their breath and host fund-raisers.

Biden, Harris and Pence are all visiting Arizona today.