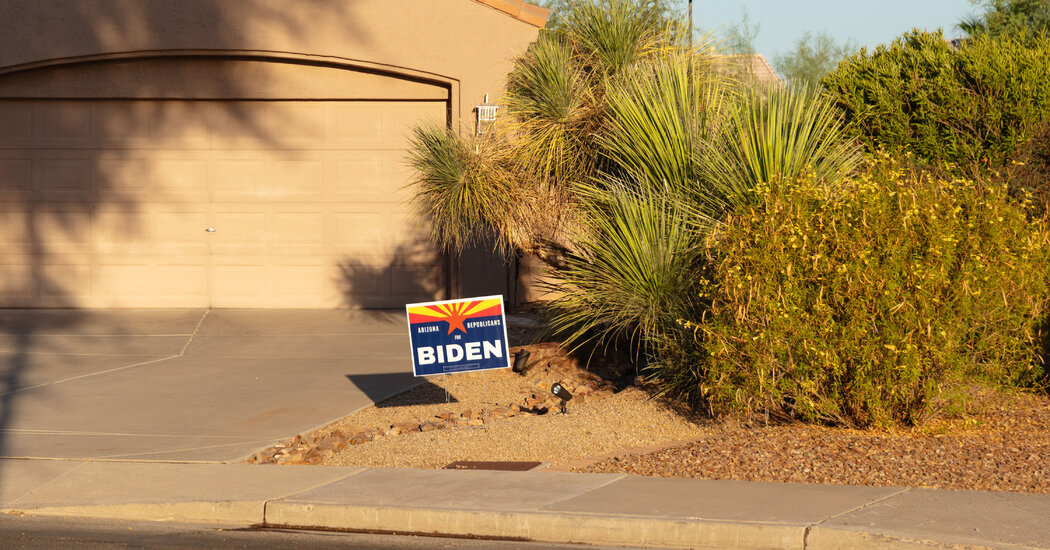 For the better part of a century, members of the Church of Jesus Christ of Latter-day Saints have made their political home under the Republican Party’s tent, motivated by conservative beliefs rooted in the family values, personal liberty and economic frugality of their faith.

But some church members now find themselves in a political quandary: They’re still Republicans, but they no longer fit in with the party as exemplified by President Trump, who for them represents a hard departure from the church’s teachings on sex, crude language, empathy and humility.

In Arizona — the only state up for grabs that has a significant Latter-day Saint population — a growing number are finding refuge in Joseph R. Biden Jr., the Democratic presidential nominee.

Most church members are still likely to support the president again this year, said Quin Monson, a Utah-based pollster, who noted that party loyalty is ingrained in the religion. They agree with Mr. Trump more than they disagree with him, and for many, the issue of abortion is a litmus test that few Democratic candidates can pass.

Even a small shift in Latter-day Saints’ voting patterns could have a large impact in Arizona. There are about 437,000 members of the faith in the state, though that number includes children; Mr. Trump won by just 91,000 votes in 2016. With well educated suburbanites already moving away from the president, the race is expected to be considerably closer this year.

Despite their reservations about Mr. Trump in 2016, members of the faith largely fell into familiar voting patterns, supporting Mr. Trump or begrudgingly casting their votes for a third-party candidate. But Mr. Biden doesn’t cause the same reluctance among some Latter-day Saints as Hillary Clinton did.

Rob Taber, the head of the LDS Democrats of America, says he understands how isolating it can be for church members who don’t support the Republican nominee, and he is trying to create “a home for the politically homeless” in the Biden campaign.

“We like to say, converts are welcome,” he said. “But this election, visitors are welcome.

Nearly Half of the U.S. Is in Drought. It May Get Worse.

Democrats’ Anger Over Barrett Could Have Big Consequences in the Senate