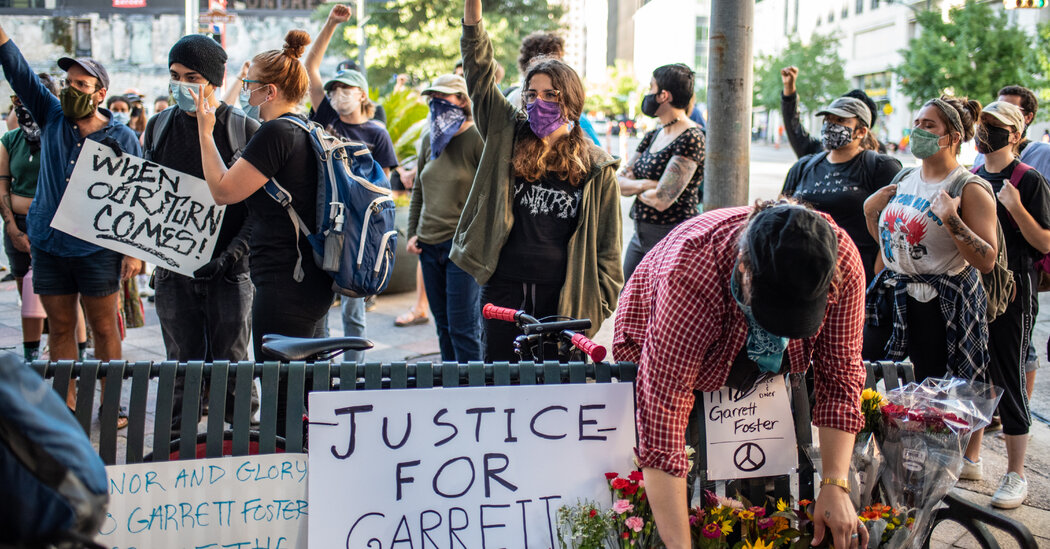 AUSTIN, Texas — The deadly confrontation between an armed motorist and an armed protester during a street demonstration in downtown Austin over the weekend began when the motorist made a turn toward a crowd of marchers and came to a stop.

The protester was Garrett Foster, 28, a former aircraft mechanic for the U.S. Air Force who wore a bandanna on his face and carried an AK-47-type rifle on a strap in front of him. The driver who fired the fatal shots has now been identified as Daniel S. Perry, 33, an active-duty sergeant with the U.S. Army and a driver for a ride-share company who had just dropped off a customer nearby.

Days after the shooting that stunned Austin, details of the encounter remain in dispute, with different points of view from the police, demonstrators and Mr. Perry, who has not been charged with any crime.

Mr. Foster was at the demonstration that night with his fiancée, Whitney Mitchell, a quadruple amputee who uses a wheelchair. Mr. Foster was white, and Ms. Mitchell is Black. The two of them had frequently attended protests against police brutality in Austin.

Demonstrators who witnessed the confrontation have said in interviews that Mr. Perry was driving aggressively in the direction of the protesters and that Mr. Foster approached the vehicle with his rifle pointed downward. At that point, they said, Mr. Perry pulled out a handgun and shot him.

But in a statement released late Thursday evening, Mr. Perry’s lawyer disputed that version of events.

Mr. Perry did not know that a Black Lives Matter demonstration was taking place when he turned onto the street, said the lawyer, F. Clinton Broden.

“It was only then that Sgt. Perry, who carried a handgun in his car for his own protection while driving strangers in the ride-share program, fired on the person to protect his own life,” he said.

Mr. Broden said the police had interviewed witnesses who were marching with Mr. Foster and who had confirmed that he had raised his rifle “in a direct threat to Sgt. Perry’s life.” Immediately after the shooting, he said, a person in the crowd began firing on Mr. Perry’s car, so he “drove to safety and immediately called the police.”

Mr. Foster’s family said they were certain that he had not threatened the motorist.

“Everyone who was standing around said Garrett never raised his weapon,” his mother, Sheila Foster, said in an interview on Friday. “That man took away one of the best people on this planet.”

A person who appeared to be Mr. Perry had posted in the past on Twitter about using violence against protesters. The Twitter account has since been deleted, and Mr. Broden did not respond to queries about it.

In June, President Trump posted a warning to protesters the day before his rally in Tulsa, Okla., writing on Twitter that any “protesters, anarchists, agitators, looters or lowlifes who are going to Oklahoma please understand, you will not be treated like you have been in New York, Seattle, or Minneapolis. It will be a much different scene!”

The person who appeared to be Mr. Perry responded on Twitter: “Send them to Texas we will show them why we say don’t mess with Texas.” In another tweet in June, he wrote that shooting someone in their “center of mass,” or chest area, was the best way to take the person down.

Mr. Foster’s comments before the shooting are also being scrutinized. Earlier that evening at the demonstration, Mr. Foster was interviewed by an independent journalist on Periscope about why he brought his rifle, and he said that “all the people that hate us” were too afraid to “stop and actually do anything about it.”

One police official who criticized that comment on social media has since apologized. The official, Kenneth Casaday, the president of the Austin police officers’ union, wrote on Twitter that Mr. Foster “was looking for confrontation and he found it,” but he later apologized in another tweet “for my offensive choice of words.”

Austin’s police chief, Brian Manley, said investigators were told that Mr. Foster was shot after he pointed his rifle at Mr. Perry. “During the initial investigation of this incident, it appears that Mr. Foster may have pointed his weapon at the driver of this vehicle prior to being shot,” Chief Manley told reporters on Sunday.

Chief Manley said that a person in the crowd who had also opened fire — the gunfire that Mr. Perry had reported to the police — had done so after hearing the gunshots and seeing the car drive away.

Mr. Perry called 911 after leaving the scene and told dispatchers that he had shot someone who had approached him and pointed a rifle at him. He was instructed to pull over. Both he and the person in the crowd who shot at the vehicle were interviewed by investigators and released. They both had state-issued handgun licenses.

Mr. Broden said Mr. Perry had “fully cooperated with the police following the shooting and he continues to do so.” Mr. Perry, who is stationed at the Fort Hood Army base in Killeen, Texas, and had served in Afghanistan, was driving for the ride-share company as a way to make extra money, his lawyer said. It was unclear which company he drove for.

“We simply ask that anybody who might want to criticize Sgt. Perry’s actions, picture themselves trapped in a car as a masked stranger raises an assault rifle in their direction and reflect upon what they might have done if faced with the split-second decision faced by Sgt. Perry that evening,” Mr. Broden said in the statement.

Mr. Foster’s mother said her son enlisted in the Air Force in the weeks after he graduated from high school in 2010 in the Dallas suburb of Plano, where he grew up. Months later, he and Ms. Mitchell became engaged, when they were both 19. In a matter of weeks, their lives changed — Ms. Mitchell collapsed at her grandmother’s house. Her organs began to fail, as an infection caused septic shock, a life-threatening condition, Ms. Foster said. All four of her limbs were amputated.

Mr. Foster spent two years in the Air Force but was discharged and began taking care of Ms. Mitchell. The couple lived in a house in North Austin that they renovated to accommodate her wheelchair and her health needs.

“From the moment he got out, two years after he went in, he never left her side,” Ms. Foster said. “He brushed her teeth. He combed her hair. He did her makeup.”

During a phone conversation she had with her son about a week before his death, his mother expressed concern that the couple could be exposing themselves to danger by participating in the demonstrations, which she knew he had been attending with his rifle. She asked her son who would take care of Ms. Mitchell if he were put in jail.

The White House relied on a rapid test, but used it in a way it was not intended.