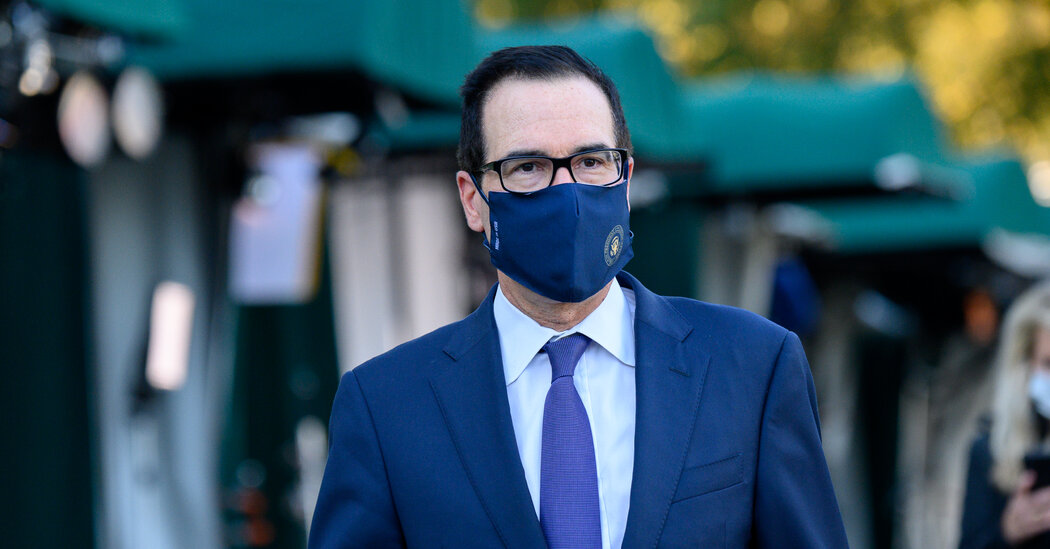 Speaker Nancy Pelosi of California is racing against a self-imposed Tuesday deadline for a compromise with congressional Republicans on a coronavirus stimulus package that could be considered before the election.

She and Steven Mnuchin, the Treasury secretary, held their latest talks on Monday afternoon, speaking for nearly an hour by phone. The two “continued to narrow their differences,” said Drew Hammill, a spokesman for Ms. Pelosi. He added that “the speaker continues to hope that, by the end of the day Tuesday, we will have clarity on whether we will be able to pass a bill before the election.”

The odds of a last-minute deal remain long, with Democrats and the Trump administration still haggling over funding levels and policy issues. Even if they could agree, Senate Republicans have all but ruled out embracing a plan anywhere near as large as the more than $2 trillion package under discussion.

If such a deal were struck, Senator Mitch McConnell, Republican of Kentucky and the majority leader, said the chamber would consider it, but he also made a point of scheduling two separate votes in the coming days on narrower bills of the kind senators in his party are more willing to accept. One would revive a lapsed federal loan program for small businesses and the other would provide $500 billion for schools, testing and expired unemployment benefits.

President Trump has insisted in recent days that he wants to spend more than the $2.4 trillion Ms. Pelosi has put forward in negotiations, and claimed he could easily cajole enough Senate Republicans into supporting an agreement of that size — a notion that many of them have told his top deputies would never happen.

In a private call with Democrats on Monday, Ms. Pelosi instructed committee chairmen to work with the top Republicans on their panels to try to resolve critical differences holding up the deal. She outlined a number of remaining areas of disagreement, including Democratic demands for hundreds of billions of dollars in funding for state and local governments, support for restaurants devastated by the pandemic and additional health provisions, according to a person on the call, who disclosed the details on condition of anonymity. Democrats also remain wary that the administration would spend the funds as Congress intended.

Still, Ms. Pelosi insisted she was optimistic a bargain could be reached and said she was intent on reaching one before a new Democratic administration began in January.

Kamala Harris, Daughter of Immigrants, Is the Face of America’s Demographic Shift

‘You Would Do the Same’: Graham Is Defiant on Supreme Court Reversal

An expected guilty plea in the review of the Russia inquiry pleases Trump.