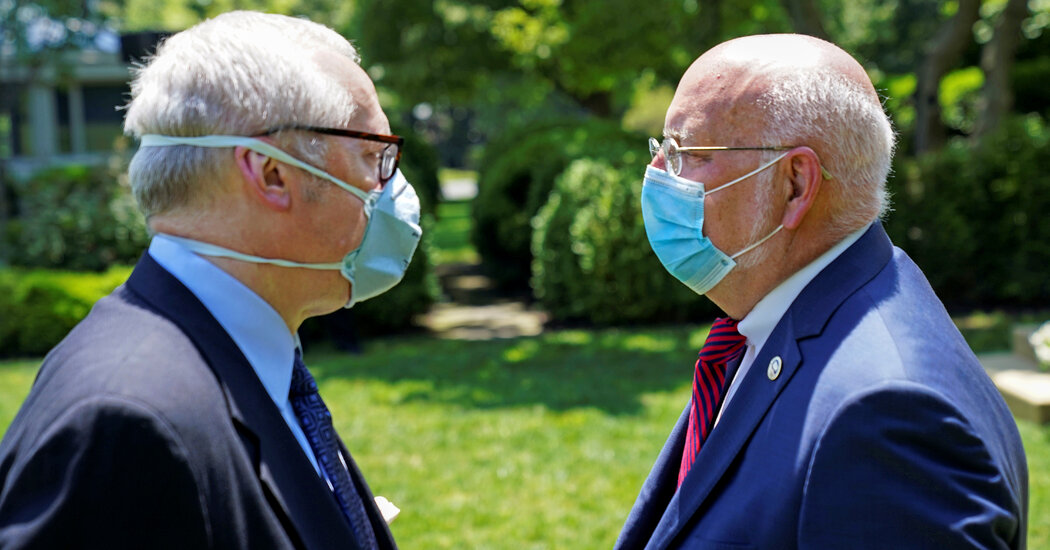 WASHINGTON — Political appointees at the Department of Health and Human Services have repeatedly asked the Centers for Disease Control and Prevention to revise, delay and even scuttle weekly reports on the coronavirus that they believed were unflattering to President Trump.

Current and former senior health officials with direct knowledge of phone calls, emails and other communication between the agencies said on Saturday that meddling from Washington was turning widely followed and otherwise apolitical guidance on infectious disease, the Morbidity and Mortality Weekly Reports, into a political loyalty test, with career scientists framed as adversaries of the administration.

They confirmed an article in Politico Friday night that the C.D.C.’s public morbidity reports, which one former top health official described on Saturday as the “holiest of the holy” in agency literature, have been targeted for months by senior officials in the health department’s communications office. It is unclear whether any of the reports were substantially altered, but important federal health studies have been delayed because of the pressure.

The reports are written largely for scientists and public health experts, updating them on trends in all infectious diseases, Covid-19 included. They are guarded so closely by agency staff members that political appointees only see them just before they are published. Health department officials have typically only received notice of the titles of the reports.

Michael Caputo, a former Trump campaign official installed by the White House in April as the top department spokesman, said on Saturday that the person most involved in reshaping the Morbidity and Mortality Weekly Reports has been Paul Alexander, an assistant professor of health research at McMaster University in Canada and an adviser Mr. Caputo hired to help with him on the science of the pandemic.

“He digs into these M.M.W.R.s and makes his position known, and his position isn’t popular with the career scientists sometimes,” Mr. Caputo said. “That’s called science. Disagreement is science. Nobody has been ever ordered to do anything. Some changes have been accepted, most have been rejected. It’s my understanding that that’s how science is played.”

But Mr. Caputo and Mr. Alexander appeared to view the reports, which have presented dire new findings about the spread of the virus, as incompatible with the Trump administration’s push to move beyond the pandemic and present the country as on the upswing, officials said.

The New York Times interviewed four current and former federal health officials on Saturday with direct knowledge of efforts to warp the weekly reports. They spoke on to condition of anonymity to be frank on internal deliberations at the Department of Health and Human Services.

In emails obtained by Politico and confirmed by a person with direct knowledge of them, Mr. Alexander accused C.D.C. scientists of trying to “hurt the president” with the reports, which he referred to as “hit pieces on the administration.” Mr. Alexander asked Dr. Robert R. Redfield, the C.D.C. director, to edit reports that had already been published, which he believed overstated the risks of the virus for children and undermined the administration’s efforts to encourage schools to reopen.

Mr. Caputo and Mr. Alexander also tried to stop the publication of a report — issued last week after a delay — on use of the malaria drug hydroxychloroquine, an unproven treatment that Mr. Trump and conservative allies have heralded and used as a kind of litmus test of resistance to scientific consensus. In discussions with the C.D.C., they questioned the political beliefs of the report’s authors.

The political involvement “undermines the credibility of not only the M.M.W.R. but of the C.D.C. And the C.D.C.’s credibility has been tarnished throughout Covid already,” said Dr. William Schaffner, an infectious disease specialist at Vanderbilt University who sits on the external editorial board of the Morbidity and Mortality Weekly Reports.

“The M.M.W.R. had an unblemished reputation as being accurate, objective and science-based, free from political influence,” he said.

The reports have an internationally respected place in public health history, often breaking news about developments in disease research. Perhaps the best-known is the one the C.D.C. published on June 5, 1981, about five previously healthy young gay men in Los Angeles who had developed a form of pneumonia ordinarily seen in people with depressed immune systems. Two of them died. It was the first recorded report of the illness that would be named AIDS and has killed an estimated 32 million people around the world.

The reports have “been so successful that it has been the model for other similar communicable disease bulletins by ministries of health around the world,” Dr. Schaffner said.

Mr. Caputo, who is known to promote conspiracy theories, occupies a job at the health department typically conducted in an apolitical way, coordinating the messaging of an 80,000-person department that functions as the center of the American public health bureaucracy.

But since his arrival, during the biggest health crisis the department has ever faced, he has turned his office into what current and former senior administration officials have referred to as a bullying operation. Mr. Caputo still uses social media to attack reporters and Democratic politicians.

Mr. Caputo has also helped install allies in other communications positions at health agencies under the Health and Human Services Department, and even an interim chief of staff at C.D.C.

The meddling from Washington has concerned Dr. Redfield, who often pushed back when Mr. Caputo called to pester him about the morbidity reports, according to a former senior government health official with direct knowledge of the conversations.

The C.D.C. earlier this year was first asked for titles and synopses of the reports before their publication. Agency officials were then asked for full drafts, a request that Dr. Redfield resisted. Mr. Caputo and his aides “wanted to add caveats and add commentary,” according to the official.

Mr. Alexander at one point demanded the C.D.C. stop publishing the reports until he had the ability to review and edit them in their entirety.

One federal health official emphasized that while the C.D.C. now sends portions of draft weekly reports to the Health and Human Services Department, their publication is not conditioned on department approval. Still, the official said, the draft reports are returned with specific critiques from Mr. Alexander and demands for revisions.

Noncoronavirus reports, such as those on tuberculosis and the flu, have been passed over, the former official said. But reports on the pandemic have received extra scrutiny.

“Our best estimate right now is for every case reported there were actually 10 other infections,” Dr. Redfield said at the time, without citing the source of his information.

The official said the study had been delayed because it was “in conflict with messaging.” The day after Dr. Redfield held the call, its authors scrambled to publish the data on the agency’s website to back him up.

The paper, which did not fit in with Mr. Trump’s various claims that either the pandemic would go away or the number of cases was high because the United States was doing so much testing, also appeared online on the Journal of the American Medical Association’s internal medicine website.

Another study suggesting the novel coronavirus was in the United States in December — not January, as health officials have said — has been ready since June 30 but still hasn’t been published, this official said.

Joshua Sharfstein, an expert in public health communications at Johns Hopkins Bloomberg School of Public Health, said he often used the reports, such as one on the benefits of vaccination, in his classes. And it was the weekly report, he said, that first identified the scale of the current opioid epidemic.

“I think of it as the core vehicle for C.D.C. to communicate scientific findings,” he said. “It’s very common for those articles to have an immediate impact in thinking about public health challenges.”