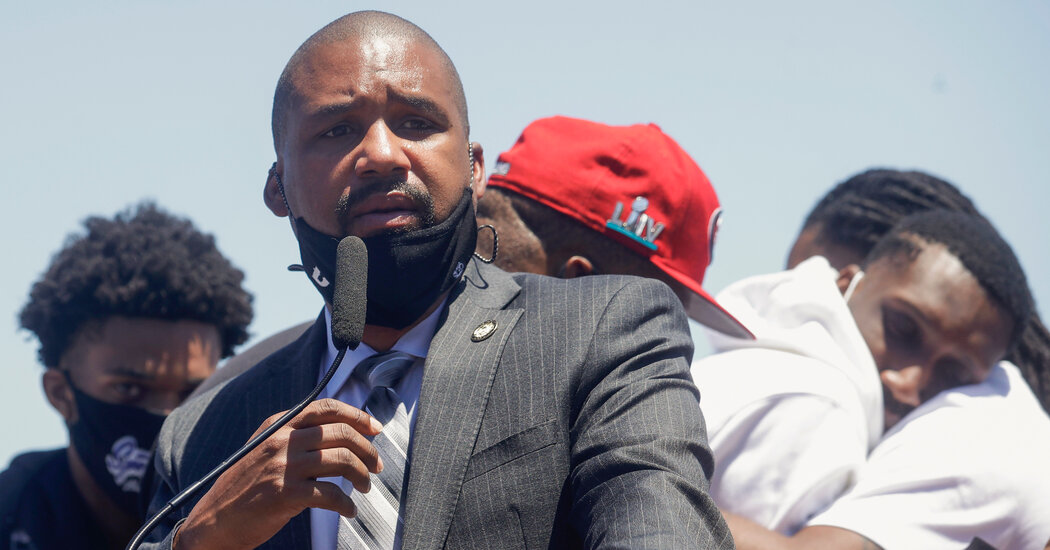 The San Francisco board of supervisors is poised to pass legislation Tuesday aimed at cracking down on frivolous calls to 911 against people of color, a move that will make it the latest city to enact an ordinance against racist calls to the police.

The legislation, the Caution Against Racial and Exploitative Non-Emergencies Act, has a memorable and provocative acronym — CAREN.

Although the lead sponsor denies this was his intent, the name evokes “Karen,” the online meme that has morphed into a symbol of racism and white privilege. On social media, a Karen is a busybody, typically an older white woman, often caught on video calling 911 to report a Black person doing something benign. Critics say that “Karen,” in itself, is a stereotype.

The CAREN proposal is expected to have unanimous support when the board votes Tuesday night. All 11 board members signed on as co-sponsors. A second, largely procedural vote is expected next week. Mayor London Breed plans to sign the legislation after that, a spokeswoman said.

“We wanted to put something in place that’s going to stop these racist, prejudiced calls that weaponize police against Black people and people of color,” said Shamann Walton, the Democratic supervisor who introduced the legislation.

The legislation follows other cities and states that have pushed for ordinances against discrimination.

Last year, the city commission in Grand Rapids, Mich., unanimously approved an ordinance that banned racial profiling in 911 calls. Similarly, in Oregon last year, the Senate passed a bill that allowed people to sue if they had the police called on them as a result of discrimination.

The legislation in San Francisco would allow a person who was the subject of a false or frivolous 911 call to sue the caller for at least $1,000 if the police responded and if the person was harmed in some way. For example, a person who was arrested and had to post bail or pay court fees, or could prove emotional trauma or damage to their reputation, could file a lawsuit under the legislation.

Brittni Chicuata, chief of staff at the city’s Human Rights Commission, said she drafted the legislation following the case of Viktor Stevenson, a young Black man who was approached by the police in 2018 after someone called to report that he was breaking into a business.

The business was Mr. Stevenson’s own lemonade stand, which he was opening for the day.

Mr. Stevenson attended a commission meeting in February 2019 and broke down in tears as he recalled his experience, Ms. Chicuata said.

His emotions recalled the “feeling of indignity when your fellow citizen threatens you in a way,” said Ms. Chicuata. “When white people threaten to call the police on people of color, that is to me a very violent act.”

She said she approached Mr. Walton about introducing the legislation after a white couple called the police in June to report a man who had written “Black Lives Matters” in chalk outside a property. It was his own home.

The legislation in San Francisco and other places is giving teeth at a local level to laws that have existed for decades, said Prof. Gloria Browne-Marshall, a civil rights attorney and constitutional law expert at John Jay College of Criminal Justice.

The Supreme Court has repeatedly concluded that it is unlawful to call the police or use other government resources for racially motivated reasons, she said.

“In the same way you can’t abuse the fire department by making fake calls, you can’t use government resources for private discrimination,” Professor Browne-Marshall said. “You’re not supposed to abuse the government at all to harass people.”

The problem is the police have allowed themselves to be used as a tool of discriminatory behavior and emboldened people to abuse the 911 system, Professor Browne-Marshall said.

The name of the legislation drew the ire of some women in San Francisco, who wrote letters to the board complaining that it was vilifying people named Karen.

The rise of the “Karen” meme has been criticized as sexist, ageist and even an attempt at silencing women.

“Calling a woman a Karen is simply another way of controlling women and their behavior, telling us to be quiet and stop complaining,” wrote Karyn Stricker, an environmental activist, in The Hill. “It legitimizes misogyny.”

The term is often used to describe the racist behavior of women who are not named Karen. In one prominent example, a white woman in Central Park in New York called the police after a Black bird watcher told her to put her dog on a leash. She ended up losing her job.

The term has also been used to insult men who point out poor behavior, and has morphed beyond encounters involving race. Last month, a freshman at New York University asked two city police officers in the subway why they were not wearing masks. One of the officers called him a “male Karen.”

Ms. Chicuata said she empathized with the argument that the use of the name could be problematic.

“I would never want to participate in anything that’s perpetuating misogyny,” she said.

Ms. Chicuata speculated that the acronym in the bill was likely an attempt at “grabbing attention because of the moment and the use of it colloquially.”

Mr. Walton said he had not intended to single out anyone by name or gender when he wrote the bill.

“We wanted to come up with a law that was going to address the problem, and that’s what the acronym spelled out,” Mr. Walton said.

Professor Browne-Marshall said the acronym should not distract from the overall importance of enacting the legislation.

“Everyone should be respected,” she said. “But we have to navigate this use and abuse of law enforcement in a way that makes it a serious issue.”

Trump Says He’ll Look Into a Pardon for Edward Snowden

Fact Checking the Portland Protests: How Violent Are They?

Words of Gratitude From New Hampshire