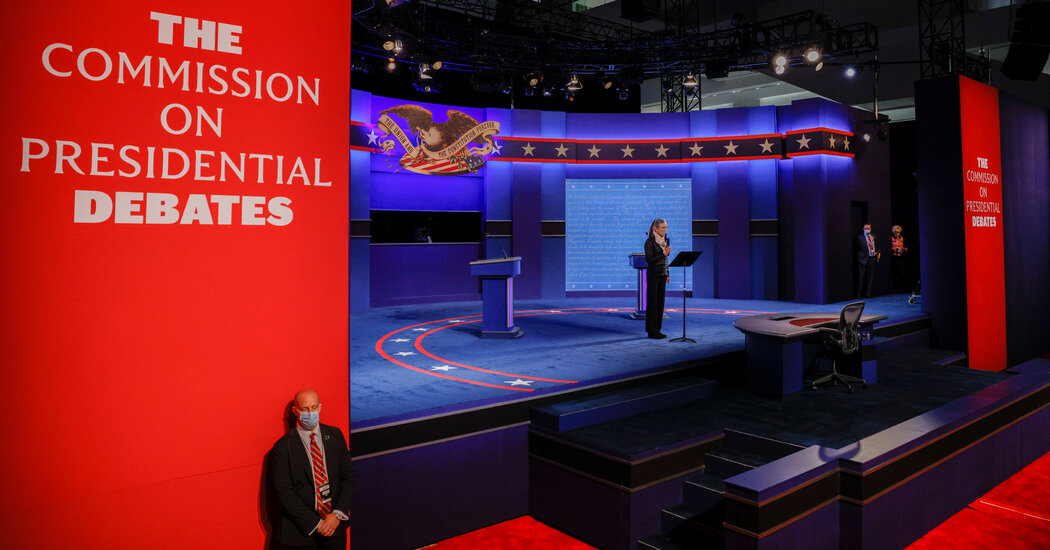 The Commission on Presidential Debates said on Wednesday that it would adjust the format of this year’s remaining matchups in the wake of Tuesday night’s melee in Cleveland, where frequent interruptions from President Trump led to a chaotic and often incoherent event.

Several changes are under consideration, including new limits on speaking times that would replace an open discussion portion of the debate where candidates have traditionally been encouraged to freely engage, according to two people with knowledge of the commission’s discussions on Wednesday.

Currently, candidates are granted two minutes apiece to answer a moderator’s question before being allowed to respond directly to one another — ground rules that Mr. Trump routinely flouted on Tuesday.

Members of the commission, a bipartisan nonprofit that has organized the debates since 1987, were frustrated by the way Tuesday’s event played out, as Mr. Trump interrupted both his Democratic opponent, Joseph R. Biden Jr., and the moderator, Chris Wallace of Fox News.

The commission is also weighing whether to grant moderators the power to shut off a candidate’s microphone to help restore order, the people said, although both cautioned that those discussions were in a preliminary phase.

Cutting off a microphone, although widely prescribed on social media as a remedy to Tuesday’s problems, can be complex from a television production standpoint and may not prevent a candidate from continuing to speak in the debate hall.

Another option under consideration is to penalize an interrupting candidate by forcing him to yield more time back to his opponent, the people said.

A spokeswoman for the debate commission declined to comment on Wednesday.

“Last night’s debate made clear that additional structure should be added to the format of the remaining debates to ensure a more orderly discussion of the issues,” the organization wrote in a formal statement, which did not elaborate on the specific changes its members had in mind. “The C.P.D. will be carefully considering the changes that it will adopt and will announce those measures shortly.”

The statement also praised Mr. Wallace, who received some tough criticisms online, “for the professionalism and skill” he brought to Tuesday’s debate. The commission said it “intends to ensure that additional tools to maintain order are in place for the remaining debates.”

Ground rules for the debates are set by the commission, but the candidates’ campaigns often litigate many of the details before agreeing to participate.

The next debate, to be moderated by Steve Scully of C-SPAN, will be a town-hall format where Florida voters are allowed to ask many of the questions.

The third debate, with Kristen Welker of NBC News as moderator, will resume the format Mr. Wallace contended with on Tuesday night.

Kate Bedingfield, a Biden deputy campaign manager, said on Wednesday that Mr. Biden was looking forward to the town-hall debate and that he would “be focused on answering questions from the voters there, under whatever set of rules the commission develops to try to contain Donald Trump’s behavior.”

Tim Murtaugh, the Trump campaign’s communications director, also issued a statement on Wednesday about the commission’s plan to change its rules, saying, “President Trump was the dominant force and now Joe Biden is trying to work the refs.”

“They shouldn’t be moving the goal posts and changing the rules in the middle of the game,” Mr. Murtaugh said.

Top U.S. military leaders, including the chairman of the Joint Chiefs of Staff, are quarantining after being exposed to the virus.

Climate change is on the agenda for the final Biden-Trump debate.