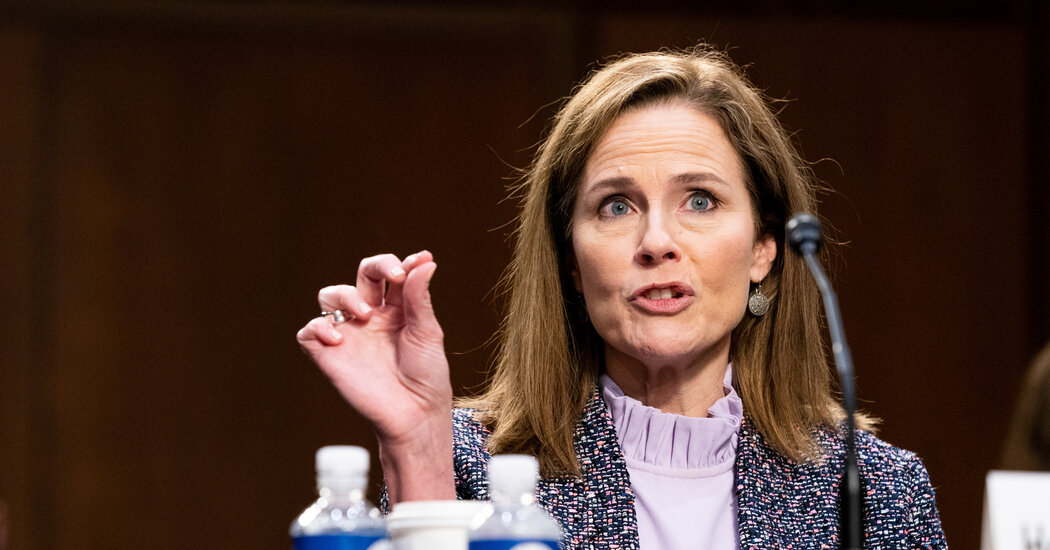 Many of the issues dominating the angry arena of the 2020 presidential election are also at the center of Amy Coney Barrett’s hearings on Capitol Hill, but at a scale that fits the carpet-muffled confines of a committee room.

Judge Barrett’s reluctance to discuss her own positions on the central points of combat between the parties — how she would rule on abortion, the Affordable Care Act and key questions about executive power — followed the sacrosanct norms of modern judicial confirmations.

The differences between these two processes at the heart of power acquisition in American politics — a presidential campaign and a Supreme Court confirmation — have never been as stark, simply because they have never been running at the exactly the same time.

In her opening statement this week, Judge Barrett declared that she would be informed by judicial impartiality, and that the “courts should not try” to weigh in on political matters, consistent with Canon 5 of the American Bar Association’s Model Code of Judicial Conduct.

It was clear that the partisan combatants on the committee did not quite see it that way.

On Tuesday, Senator Kamala Harris of California, the Democratic vice-presidential nominee, argued that “the Affordable Care Act and all its protection hinge on this seat, and the outcome of this hearing.”

But Judge Barrett repeatedly declined to say how she might rule on pending cases that could decide the fate of President Barack Obama’s health care law.

Senator Lindsey Graham, Republican of South Carolina and the chairman of the Judiciary Committee, opened Wednesday’s hearing by saying, “This is the first time in American history that we’ve nominated a woman who is unashamedly pro-life” — even as Judge Barrett deflected whenever asked about her personal views.

Then there was the matter of President Trump.

Judge Barrett would not give a definite answer when asked by Senator Patrick J. Leahy, a Vermont Democrat, on Wednesday if the courts had the power to enforce their rulings if a president disobeyed them.

And she was equally unwilling to discuss, at any length or in significant detail, how the court might respond if Mr. Trump attempts to pardon himself, should he fear prosecution after he leaves office.

“That question may or may not arise, but that is one that calls for legal analysis of what the scope of the pardon power is,” she said, adding that she could not offer an opinion on a question that she could be called upon to rule on.

Nonetheless, with Judge Barrett’s near-certain confirmation to the high court, the power to tip the conservative majority into a supermajority is sure to have a far-reaching impacy on policy that is likely to resonate far beyond the term of whoever is inaugurated in January.

Speculation builds over whether enough Republicans will back Trump’s Supreme Court plans.

Using Technology to Tailor Lessons to Each Student