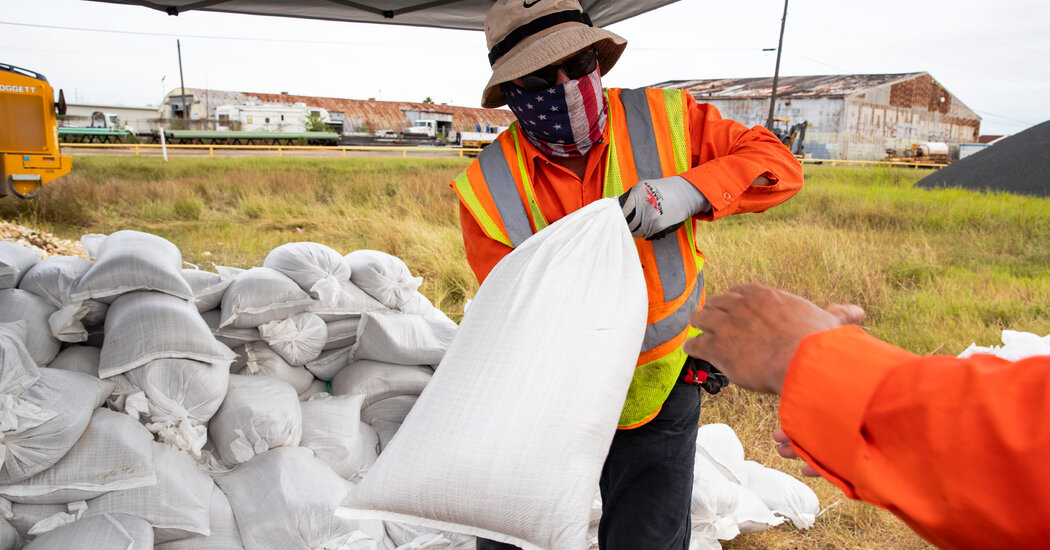 Three separate storms — two in the Atlantic Ocean and one in the Pacific — prompted a series of weather warnings and watches on Friday for some islands in the Caribbean and parts of Texas and Hawaii.

Tropical Storm Hanna, in the Gulf of Mexico, continued to strengthen on Friday afternoon. It is expected to become a Category 1 hurricane with winds of about 75 miles per hour by the time it makes landfall on Saturday afternoon, the National Hurricane Center said.

A hurricane warning was issued for parts of the Central Texas coast, from Port Mansfield to Mesquite Bay. Officials expected storm conditions to reach the Texas coast by Saturday morning.

The center also warned of a “life-threatening storm surge” along parts of the Texas coast, from Baffin Bay to Sargent, and heavy rains across southern Texas and northeastern Mexico that could result in flooding.

The system, which had maximum sustained winds of 50 m.p.h., was about 230 miles east of Corpus Christi, Texas, and moving west and northwest at 10 m.p.h on Friday evening.

“The primary threat from this is going to be rainfall,” Dennis Feltgen, a meteorologist and spokesman for the center, said on Friday. “Four to eight inches of rain and isolated amounts of up to a foot through Sunday night in South Texas.”

On Thursday, Gov. Greg Abbott of Texas placed numerous resources on standby in anticipation of the storm’s arrival. By Friday, he began urging residents to heed guidance from local officials and to prepare.

City officials in Corpus Christi, on the Gulf Coast, said that they were clearing storm drains in preparation for rain and potential flooding and that beaches in the area would be closed from Friday afternoon until Monday morning.

The storm was still on track to approach Hawaii, he said. A hurricane watch was issued on Friday evening for the island of Oahu, Hawaii County and Maui County, including the islands of Maui, Lanai, Molokai and Kahoolawe, the National Hurricane Center said.

According to the service, maximum sustained winds were around 115 m.p.h. with higher gusts Friday night.

Gov. David Ige of Hawaii on Thursday issued a pre-landfall emergency proclamation, which authorized the spending of state funds for quick and efficient disaster relief.

“The good news is that the storm is going to gradually weaken today, through the weekend, because it will be tracking over some cooler water,” Mr. Feltgen said.

Douglas was still expected to be at or near hurricane strength when it gets closer to the eastern end of the Hawaiian islands by Saturday night or Sunday, he said.

“And we don’t just focus on the wind. You have to look at the water impacts on this thing as well,” Mr. Feltgen said. “Very heavy rainfall. They could be looking at some flash flooding and tremendously rough surf. This is something residents of the Hawaiian chain need to be paying attention to.”

Tropical Storm Gonzalo continued moving toward the Windward Islands in the Caribbean on Friday afternoon, the National Hurricane Center said.

Mr. Feltgen said it appeared that Gonzalo would not reach hurricane strength, noting that the storm’s winds had decreased to 45 miles per hour.

Gonzalo, which became a tropical storm on Wednesday, was about 445 miles east of the southern Windward Islands and was moving west at 18 m.p.h., the center said.

Gonzalo was expected to produce two to five inches of rain, with some areas receiving as much as eight inches through Sunday night.

Hanna, which was upgraded to a tropical storm on Thursday, is the eighth named storm of the Atlantic hurricane season, which runs from June 1 to Nov. 30.

The first tropical storm was Arthur, which formed off the coast of Florida in May, followed by Bertha, which made landfall near Charleston, S.C., at the end of the month. The systems made 2020 the sixth year in a row that a storm developed before the official start of the season.

The National Oceanic and Atmospheric Administration predicted an above normal Atlantic hurricane season, with as many as 19 named storms — of which six to 10 could become hurricanes. Three to six of those could develop into Category 3, 4 or 5 hurricanes, it said.

An average hurricane season produces 12 named storms, with six becoming hurricanes and three of those six developing into major hurricanes.

Trump, Repeating a Baseless Theory, Suggests Kamala Harris Is Not Eligible to Serve

Val Demings Is on Biden’s V.P. List. Will Her Police Career Hurt or Help?