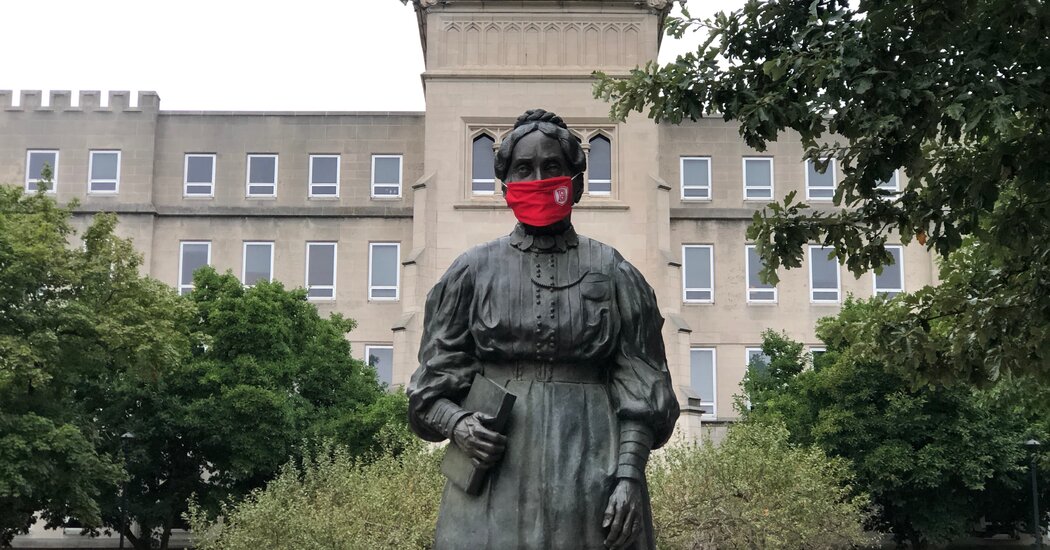 Times Insider explains who we are and what we do, and delivers behind-the-scenes insights into how our journalism comes together.

From the beginning, college this fall has been a strange and unfamiliar experience. As soon as students returned for classes in August and September, many campuses reported coronavirus outbreaks. A tracking effort by The New York Times has identified more than 178,000 cases tied to American colleges and universities since the pandemic began, most reported during the fall term.

Faced with alarming numbers, some universities sent their students home. But others thought that “stay in place” orders and campuswide quarantines might do the trick.

The University of Michigan is just the latest example: On Tuesday, local health officials ordered students there to stay in their residences — effective immediately — in an effort to control an escalating campus outbreak.

As one of the editors guiding The Times’s back-to-school coverage, I started noticing more and more all-student quarantines throughout September, and wondered what it was like on a campus where everyone was supposed to stay inside and avoid socializing — the very opposite of a typical college experience.

It’s not unusual for The Times to enlist budding reporters to help with stories. Our National editor, Marc Lacey, did his first work for the paper as a campus stringer at Cornell, and the National desk teamed up with the University of California, Berkeley’s Graduate School of Journalism this spring to cover the pandemic. College journalists and recent graduates also make up the backbone of our ongoing effort to track every confirmed coronavirus case in the country.

For the quarantine story, I reached out to reporters and editors at campus newspapers nationwide, asking if they could relay what was happening inside their schools. Their dispatches, which took up a full page inside The Times last week, provided readers with a rare look at what life is like at American universities that have imposed campuswide quarantines or stay-in-place orders for 14 days. (And for those who might wonder: Yes, they signed professional stringer contracts and will be paid.)

Among the scenes they captured: roommates at war over coronavirus restrictions. Entire dormitories on lockdown. Panicked, pajama-clad students running through the streets to stock up on beer and groceries, or begging Mom and Dad to bring the minivan for a quick escape.

Haley Johnson at Bradley University in Peoria, Ill., the smallest school in our mix, wrote about the “snitch form” that allowed students to rat one another out for not following the rules. Priya Jandu described the crowds she saw overflowing from Gentle Ben’s Brewing and Illegal Pete’s, two University of Arizona institutions — hard to tell there was a quarantine in place there.

And Addison Lathers provided a vivid description of the night the hammer came down at the University of Wisconsin, and the panic that ensued at two dormitories that each held more than 1,000 students about to be locked down for two weeks.

Needless to say, the experiences these journalists described were not what most college students dreamed of when perusing admissions brochures.

“I don’t know a single healthy person who remained in quarantine” as required, reported Anna Haynes, the editor in chief of the CU Independent at the University of Colorado, Boulder. That was especially true, she said, in the neighborhood known as University Hill — or to those around town, just “the Hill” — which remained an unrepentant hot spot in more ways than one.

“It’s the place you go to party,” Ms. Haynes wrote, “pandemic or not.”

Some readers were impressed with the inside look on these campuses, and the young reporters who provided it.

“I love that @nytimes turned to student journalists for this,” tweeted Sara Weissman, a staff writer at Diverse: Issues in Higher Education. “Campus newspapers are underappreciated, and they’re a huge resource right now.”

Indeed they are. In some parts of the country, as local journalism has withered, college publications have had to step in to fill the void. And many campus journalists have done a terrific job holding their administrators and peers accountable during the pandemic. The Times is continuing to look for ways to tap into their expertise and collaborate with them.

“It means a great deal to me that my work as a student journalist is recognized and valued by a publication as highly respected as The New York Times,” Ms. Haynes wrote, adding, “I am thrilled to have had this opportunity so early on in my career.”

Who Will Replace John Lewis in Congress? Georgia Democrats Are Moving Fast to Fill His Seat

What Do Portland Protesters Want, and How Have the Police Responded?