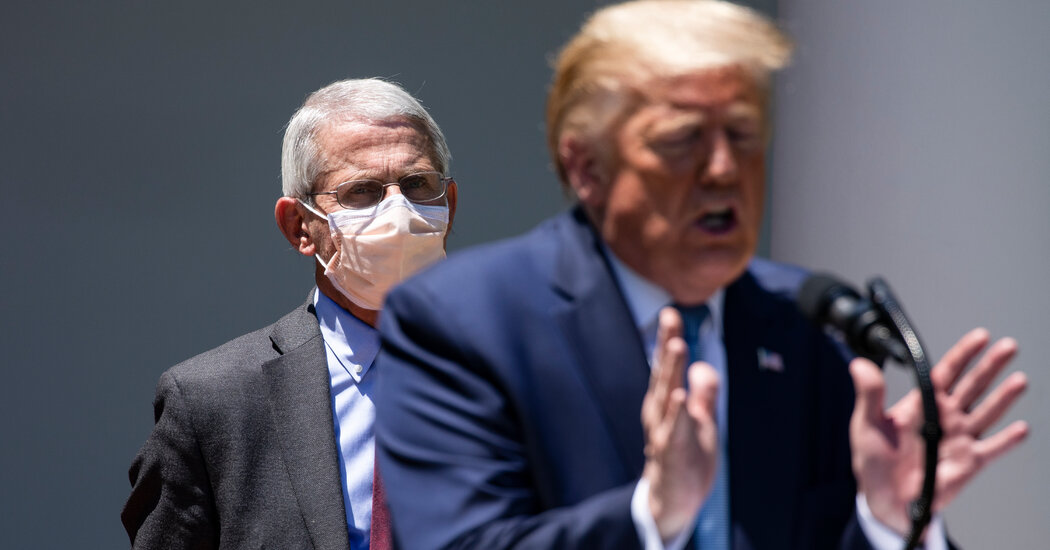 President Trump attacked Dr. Anthony S. Fauci, the nation’s leading infectious disease specialist, as a “disaster,” said that people were “tired of” the coronavirus and want to be left “alone,” and denounced his media coverage in a call with campaign staff on Monday morning.

The call, which some reporters listened in on, was between Mr. Trump and a broad array of campaign staff. The campaign manager, Bill Stepien, began the call by talking about metrics like the Republican ground game that he said supported the path he and others believe they have to victory.

He called Dr. Fauci a “nice” guy, but said, “He’s been here for 500 years,” and added, “Every time he goes on television, there’s always a bomb, but there’s a bigger bomb if you fire him. This guy’s a disaster.”

Mr. Trump’s comments came after Dr. Fauci dismissed the president’s claim that the end of the pandemic was just around the corner in an interview with “60 Minutes” that aired on Sunday. Dr. Fauci said he was not surprised that Mr. Trump had contracted the coronavirus, citing the failure to take basic precautions at White House events, including the announcement of the nomination of Judge Amy Coney Barrett to the Supreme Court.

“I was worried that he was going to get sick when I saw him in a completely precarious situation of crowded, no separation between people, and almost nobody wearing a mask,” he said. “When I saw that on TV, I said, ‘Oh my goodness. Nothing good can come out of that, that’s got to be a problem.’ And then sure enough, it turned out to be a superspreader event.”

Tensions between the president and Dr. Fauci have been building for months. Mr. Trump has often questioned Dr. Fauci’s pronouncements and recommendations on the coronavirus, and frequently seems to dismiss basic health advice, including that people wear masks.

Earlier this month, the Trump campaign released an ad that used a quote from Dr. Fauci to make it appear that he was praising President Trump’s response to the virus; Dr. Fauci responded that the ad had taken his words out of context, and that he had actually been praising the work of the coronavirus task force. He called the ad a form of harassment.

Mr. Trump has also bristled at Dr. Fauci’s superior approval ratings, particularly when it comes to trustworthiness. A poll released late last month by the nonpartisan Kaiser Family Foundation found that 68 percent of Americans trusted Dr. Fauci either a great deal or a fair amount to provide reliable information about the virus, while only 40 percent trusted Mr. Trump.

Mr. Trump also insisted a New York Times article about his frustration with some aides — and, in turn, concern among aides about where the president stands in the race — was “fake.”

The president devoted roughly half the time he spoke on the call to talking about the article and insisting details in it were inaccurate.

“I love Mark Meadows,” Mr. Trump said of the White House chief of staff, about whom he’s been highly critical in private in recent days. He called the story “sick.”

He maintained that he felt better about the 2020 race than he did the 2016 campaign that he won.

As Mr. Trump left the call, Mr. Stepien said that the campaign was seeing “momentum” at the right time, and that Democrats haven’t had the numbers he believed they need to win in early voting and absentee ballots cast so far.

Would Biden’s tax plan help or hurt a weak economy?

The Untraveled High Road of Humility, and a President Laid Low

Inside the Refugee Camp on America’s Doorstep