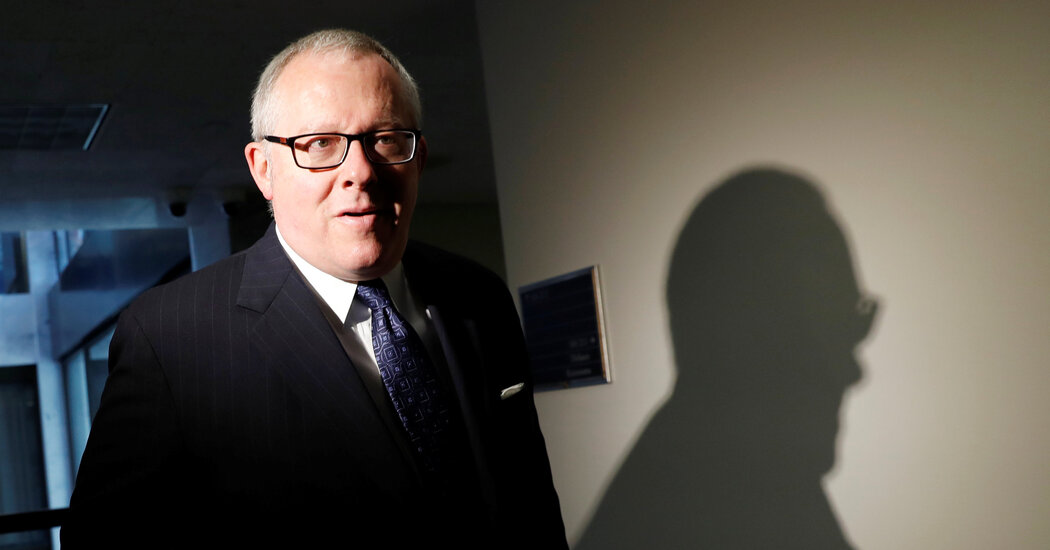 WASHINGTON — Michael R. Caputo, the assistant secretary of health for public affairs, apologized Tuesday morning to the health secretary, Alex M. Azar II, and to his staff members for a bizarre and incendiary Facebook outburst in which he accused federal government scientists working on the pandemic of “sedition” and warned of coming violence from left-wing “hit squads.”

He is considering a leave of absence to address physical health problems, according to a person familiar with the situation.

Mr. Caputo, 58, a longtime Trump loyalist, told dozens of staff members in a hastily scheduled meeting that he was under stress because of questions about his physical health and threats to his safety and that of his family. He apologized for embarrassing Mr. Azar and the department.

It was unclear Tuesday whether Mr. Caputo had seriously endangered his job with his soliloquy Sunday night, which drew national attention. Among other statements that alarmed administration critics, he accused the the Centers for Disease Control and Prevention of harboring a “resistance unit” dedicated to ousting President Trump, urged his gun-owning followers to buy ammunition because “it’s going to be hard to get” and said his mental health “had definitely failed.”

Some White House officials were unhappy about his remarks, but any decision about Mr. Caputo’s future in the government was expected to rest with Mr. Trump.

Asked about Mr. Caputo during a trip to Nashville, Mr. Azar called him a “valued” member of the coronavirus response team. “Obviously, some of those statements are concerning,” he told The Tennessean, but added: “I’m not going to comment on somebody’s personal social media posts.”

Mr. Caputo has about 5,000 friends on Facebook and at one point suggested that his followers publicly release his video presentation should anything happen to him.

Senator Patty Murray of Washington, the top Democrat on the Senate committee that oversees the Department of Health and Human Services, urged Mr. Azar to fire Mr. Caputo. Senator Chuck Schumer of New York, the Democratic leader, said Mr. Azar should resign, charging he had allowed “perhaps the most important federal agency right now to become subservient to the president’s whims.”

A department spokeswoman called Mr. Schumer’s comments “uninformed” and misleading, and an effort to discredit “the historic work of the Trump administration” in battling the pandemic.

Since he was installed at the 80,000-employee department in April by the White House, Mr. Caputo, a media-savvy former Trump campaign aide with no background in health, has worked aggressively to control the media strategy on pandemic issues. But over the weekend, he was engulfed in two explosive controversies of his own making.

First Politico, then The New York Times and other news outlets published accounts of how Mr. Caputo and a top aide, Dr. Paul Alexander, had routinely worked to revise, delay or even scuttle the core health bulletins of the Centers for Disease Control and Prevention in an effort to paint the administration’s pandemic response in a more positive light. The C.D.C.’s Morbidity and Mortality Weekly Reports had previously been so thoroughly shielded from political interference that political appointees only saw them just before they were published.

Then on Monday, a Times article about his Facebook Live presentation created a new public relations debacle for him and the department. In a statement that day, Mr. Caputo said that since the spring, he and his family had been continually harassed and threatened, including by some individuals who he said were being prosecuted. He said he appreciated the president’s understanding.

It was highly unusual for Mr. Caputo to hire Dr. Alexander, who critiqued the C.D.C. reports, to serve as his scientific adviser. In emails obtained by Politico, Dr. Alexander complained that the C.D.C. was “writing hit pieces on the administration” and insisted that it should be prevented from issuing weekly reports “unless I read and agree with the findings.”

Mr. Caputo hailed Dr. Alexander as a “genius” in his Facebook talk. McMaster University in Canada had listed him as an assistant professor on its website, but on Monday, the university said that while Dr. Alexander had received his doctorate there, he was not on the faculty.

“He is not currently teaching and he is not paid by the university for his contract role as a part-time assistant professor,” a spokeswoman, Susan Emigh, said.

The Wildfires in Photos: Oregon, California and Washington State