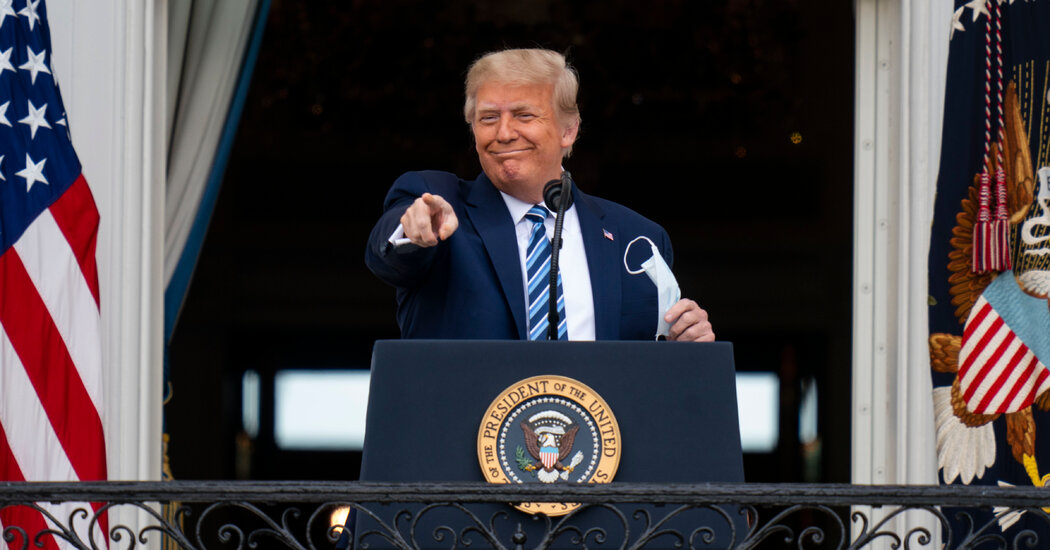 After receiving a heavy infusion of monoclonal antibodies to treat his bout of Covid-19, President Trump has declared that he is immune to the virus that causes it and talked privately about wearing a Superman T-shirt under his dress shirt when he left the hospital.

Even as the president has exulted in his supposed imperviousness to the coronavirus that is resurging across parts of the country, he has delighted in portraying former Vice President Joseph R. Biden Jr. as vulnerable and cloistered, wearing masks “every time you see him.”

But even if the president were now immune to the coronavirus, he may not remain so, scientists warn. The president’s unique treatment may have prevented his body from making the antibodies necessary for long-term protection.

The monoclonal antibodies he received were produced by the drug company Regeneron and will wane in a matter of weeks, as the synthetic molecules are known to do. Without replenishment, this decline may leave Mr. Trump even more susceptible to the virus than most patients who have recovered from Covid-19, several experts warned.

Moreover, the steroid treatment the president received early in the course of his illness suppresses the body’s natural immune response, including its propensity to make antibodies of its own.

“He may be not protected the second time around, especially because he didn’t develop his own antibodies,” said Akiko Iwasaki, an immunologist at Yale University.

Most people who are infected with the coronavirus produce antibodies to the virus that should protect them from a second infection. It’s unclear how long this immunity lasts; based on research into other coronaviruses, immunity may persist for up to a year, experts have said.

But Mr. Trump’s case is unique.

He announced his diagnosis on Oct. 1, and a test that day did not pick up any antibodies in his blood, according to a report released by his physician, Dr. Sean Conley.

The lack of antibodies that early in the course of illness is not unusual. It can take from 10 days to three weeks for powerful antibodies to surface.

“If he had tested positive, then we would know for sure that he has his own antibodies,” said Dr. Dan Barouch, a virologist at Beth Israel Deaconess Medical Center in Boston.

“Since he was antibody-negative, it is less likely but not ruled out,” he added. “He could have been in the early stage of generating his own antibodies.” (Dr. Barouch is an investigator for Regeneron’s trial of the cocktail for preventing coronavirus infections.)

On Oct. 2, Mr. Trump received eight grams of a cocktail of two monoclonal antibodies made by Regeneron. These antibodies are infused into people — like those of Mr. Trump’s age, sex and weight — who may struggle to produce an immune response of their own.

A test on Oct. 5 confirmed the presence of the antibodies, according to Dr. Conley.

But Dr. Barouch noted that “the antibodies detected in the bloodstream are not his antibodies. They’re antibodies that were administered. Those antibodies will wane over time.”

The monoclonal antibodies may have quickly suppressed the level of virus in Mr. Trump’s body. While this may have protected the president from severe symptoms, it may also have prevented his immune system from making its own antibodies.

“If you get the antibodies early on, and you either prevent or rapidly treat infections,” Dr. Barouch said, “then you probably will actually inhibit the generation of your own body’s antibodies.”

Mr. Trump was also treated with dexamethasone, a steroid that is known to suppress the immune system. And he received it much earlier in the course of his illness than usual.

That also may suppress a patient’s antibody response, said Kartik Chandran, a virologist at Albert Einstein College of Medicine in the Bronx.

“Older people and men are already less likely to generate it,” he added, referring to antibodies. “You add dexamethasone to the mix and God knows.”

Mr. Trump received a huge dose of the antibodies, but blood levels are expected to fall by half between 21 to 25 days from infusion. Values in this range “are sufficient to support monthly dosing,” according to information provided by Regeneron.

The White House did not respond to questions about whether Mr. Trump intends to take monthly doses of the cocktail.

Regeneron has said that it has 50,000 doses of the cocktail in hand, and that it would need to begin rationing the therapy if the drug were to be widely distributed.

In a clinical trial, the drug maker is evaluating whether people given the cocktail make their own antibodies, but has not yet completed the analysis, according to a spokeswoman.

Monoclonal antibodies are generally considered to be safe and effective, but Regeneron’s cocktail has not yet been rigorously tested in clinical trials. A trial of a monoclonal antibody made by Eli Lilly was paused on Tuesday because of a “safety concern.”

Mr. Trump has endorsed both treatments and repeatedly declared his immunity to the coronavirus.

“I’m immune — I could come down and start kissing everybody,” he said at a rally on Tuesday in Jonesboro, Pa. “I’ll kiss every guy. Man and woman. Look at that guy, how handsome he is. I’ll kiss him. Not with a lot of enjoyment, but that’s OK.”

How Are Students Getting Through the Semester?

Trump says he wants a conservative majority on the Supreme Court in case of an Election Day dispute.