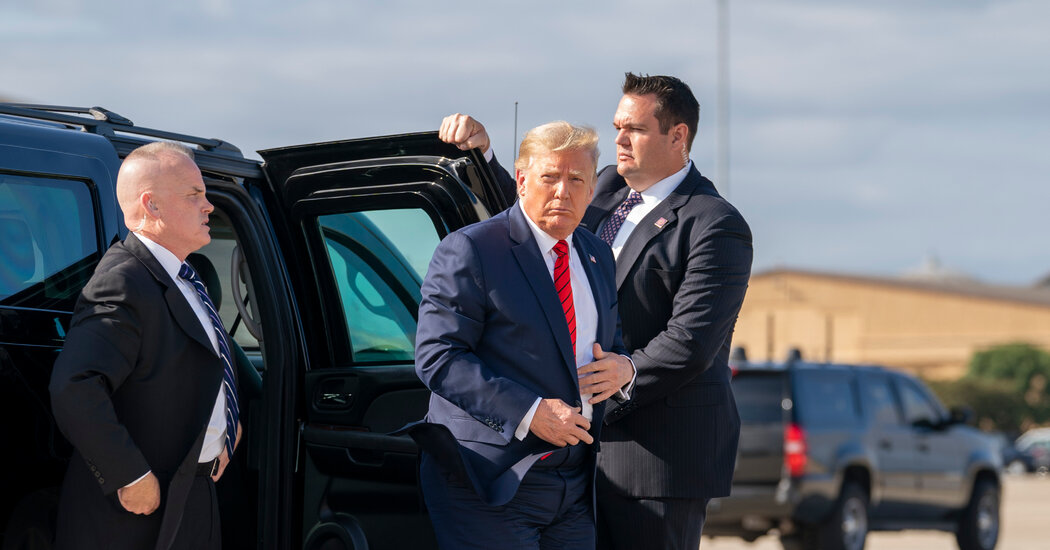 WASHINGTON — After weeks of public silence about the wildfires devastating the West Coast, President Trump scheduled a visit to California on Monday, where he will join local and federal fire and emergency officials for a briefing on the crisis.

The announcement of the visit, which was added to a three-day campaign swing through Nevada and Arizona, came after Mr. Trump tweeted Friday night thanking the firefighters and emergency medical workers. It was the president’s first acknowledgment in almost a month of a wildfire season that so far has claimed 17 lives and destroyed millions of acres of land in California, Oregon and Washington.

“I have approved 37 Stafford Act Declarations, including Fire Management Grants to support their brave work,” Mr. Trump wrote, referring to an act that frees up federal funds and other resources to help supplement state and local efforts. “We are with them all the way!” Notably absent was any mention of residents who have been living under smoke-filled skies, many forced to evacuate their homes in the middle of a pandemic.

Mr. Trump’s silence has been more noticeable because of his outspokenness over the past week on many other subjects that advisers believe could have a more direct effect on his standing in the polls against his Democratic rival, former Vice President Joseph R. Biden Jr.

On Labor Day, for instance, Mr. Trump held a news conference to herald the improvements in the economy and defend himself after The Atlantic published a report that said the president had made disparaging remarks about the military’s service members. At two rallies in Michigan and North Carolina, Mr. Trump made inflated and inaccurate statements about his own accomplishments as he campaigned in critical battleground states. And on Twitter, he has attacked Democrats and protesters while promoting false claims about the dangers of mail-in voting.

The wildfires — which have created apocalyptic images of orange-hued skies, and served as a reminder of the consequences of climate change — have not come up in any of his public remarks in weeks.

In one of the last times he mentioned the fires, he blamed the state of California for its forest management. “I said you’ve got to clean your floors, you got to clean your forests,” he said at a Pennyslvania rally in August. He added, “Maybe we’re just going to have to make them pay for it because they don’t listen to us.”

A statement released by Mr. Biden on Saturday underscored all that the president himself had left unsaid.

“To the families who have lost everything; to the people forced to evacuate their homes; to the brave firefighters and first responders risking their lives to protect their neighbors — please know that we stand with you now,” Mr. Biden said.

Mr. Trump has long clashed with California. The state’s attorney general, Xavier Becerra, has filed multiple lawsuits against the Trump administration, on issues like immigration, health care and environment policy. For its part, the administration has never appeared to hold back in confronting the state, and the president last year publicly blamed Gov. Gavin Newsom of California for a succession of wildfires and power outages that battered the state.

Democratic lawmakers from California suggested Mr. Trump was uninterested in helping a blue state. “There’s a deep feeling that you get different treatment in this administration, in terms of speed and attention, based on how people have voted,” Mayor Eric Garcetti of Los Angeles said in an interview on Saturday. He credited the Federal Emergency Management Agency with coordinating closely with local officials but described the administration’s overall response as inconsistent.

“If someone calls my office for help, I don’t ask for their political affiliation or how their neighborhood voted,” Mr. Garcetti said. “It would be refreshing to have a president who thought the same way when people are losing their homes and everything they ever had. He doesn’t blame the Gulf Coast for hurricanes, but he blames California for not raking?”

White House officials said on Saturday that the president was actively engaged in addressing the crisis and had offered assistance to California and Oregon.

Answering questions from reporters on Friday, Mr. Newsom said that during a 30-minute phone call a day earlier devoted to the wildfires, the president had “reinforced his commitment to our effort.”

A White House spokesman, Judd Deere, said the president was closely monitoring the affected areas like California and had pledged federal relief, in addition to approving a disaster declaration. The administration has also deployed more than 26,000 federal personnel and 230 helicopters to the region, Mr. Deere said. A spokeswoman for the Office of Management and Budget did not respond to a request for a total figure of how much federal funding the administration has provided those states.

Just before the White House announced Mr. Trump’s plans to visit to California, Mr. Deere also defended the president’s decision to stay away from the affected areas, noting that a trip to survey the damage would divert resources from fighting the wildfires.

The behind-the-scenes aid, and the work of agencies like FEMA, has not stopped some people from criticizing the president’s response.

Lori Lodes, the executive director of Climate Power 2020, wrote on Twitter, “I know I shouldn’t be surprised by anything anymore but the fact Trump and his administration haven’t said A SINGLE WORD about the fires ravaging the west is enraging.”

Miles Taylor, a former senior official at the Department of Homeland Security appointed by Mr. Trump, said recently that he witnessed the president seeking to cut off federal funding for California to combat wildfires simply because it is a Democratic stronghold.

“He told us to stop giving money to people whose houses had burned down from a wildfire because he was so rageful that people in the state of California didn’t support him, and that politically, it wasn’t a base for him,” Mr. Taylor, who served in the administration from 2017 to 2019, said in an advertisement by a group supporting Mr. Biden’s candidacy.