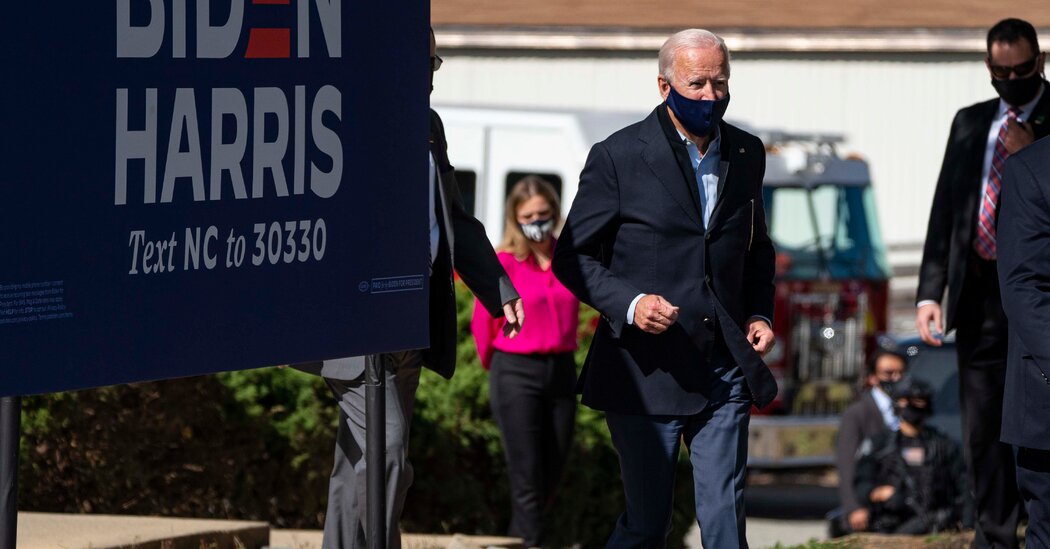 President Trump held a rally in Georgia on Friday. That he is campaigning in what should be a safely Republican state — and in others that were expected to be solidly in his column, like Iowa and Ohio — is evidence to many Democrats that Joseph R. Biden Jr.’s polling lead in the presidential race is solid and durable. Mr. Trump spent Monday in Arizona, too, a state that was once reliably Republican but where his unpopularity has helped make Mr. Biden competitive.

For some Democrats, Mr. Trump’s attention to red states is also a sign of something else — something few in the party want to discuss out loud, given their scars from Mr. Trump’s surprise victory in 2016. It’s an indication that Mr. Biden could pull off a landslide in November, achieving an ambitious and rare electoral blowout that some Democrats think is necessary to quell any doubts — or disputes by Mr. Trump — that Mr. Biden won the election.

On one level, such a scenario is entirely plausible based on the weeks and the breadth of public polls that show Mr. Biden with leads or narrow edges in key states. But this possibility runs headlong into the political difficulties of pulling off such a win, and perhaps even more, the psychological hurdles for Democrats to entertain the idea. Many think that Mr. Trump, having pulled off a stunning win before, could do it again, even if there are differences from 2016 that hurt his chances.

This much is clear: Landslide presidential victories have become rare — the last big one was in 1988, and a more modest one in 2008 — and Mr. Trump is still ahead of or running closely with Mr. Biden in many of the states he won in 2016 when the margin of error is factored in.

Democrats see flipping states like Texas and Georgia as key to a possible landslide; Texas hasn’t voted for a Democratic presidential candidate since 1976, and Georgia since 1992. A New York Times and Siena College poll published on Tuesday found Mr. Biden and Mr. Trump tied among likely voters in Georgia.

“Until Democrats win a statewide election, we’re not a purple state,” said Brian Robinson, a Republican political consultant in Georgia. “We may be a purpling state. But until they win, this is a red state.”

The Nation Wanted to Eat Out Again. Everyone Has Paid the Price.