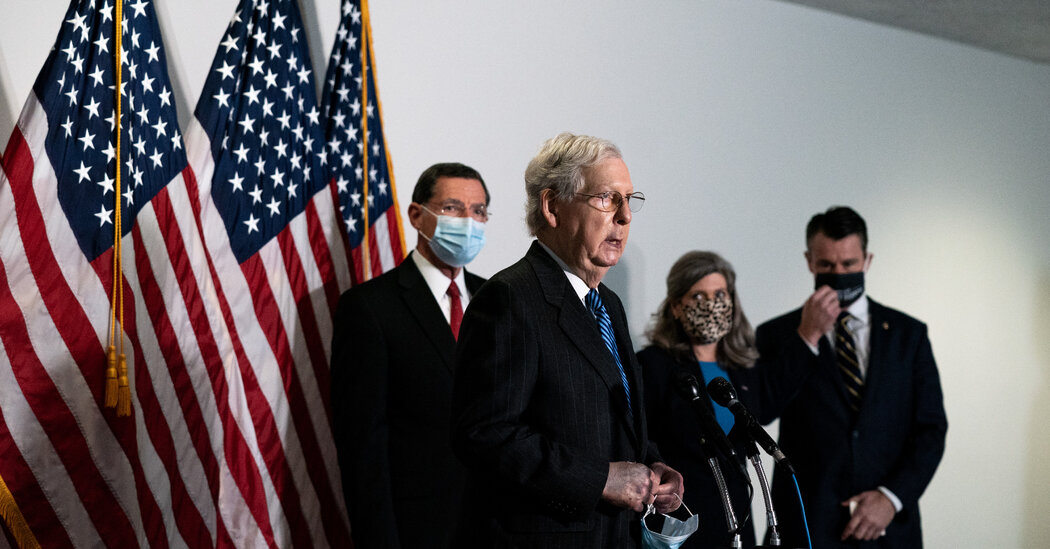 Senator Mitch McConnell, the majority leader, privately told Republican senators on Tuesday that he had warned the White House not to strike a pre-election deal with Speaker Nancy Pelosi on a new round of stimulus, moving to head off an agreement that President Trump has demanded but most in his party oppose.

Mr. McConnell’s remarks, confirmed by four Republicans familiar with them, threw cold water on Mr. Trump’s increasingly urgent push to enact a new round of pandemic aid before Election Day. They came just as Ms. Pelosi offered an upbeat assessment of her negotiations with Steven Mnuchin, the Treasury secretary, telling Democrats that their latest conversation had yielded “common ground as we move closer to an agreement.”

The cost of their emerging compromise on a new round of aid to hard-pressed Americans and businesses has steadily climbed toward $2 trillion, inching closer to Ms. Pelosi’s demands even as it far exceeds what most Senate Republicans have said they can accept.

With coronavirus cases continuing to rise across the country and tens of millions of American families and businesses going without critical federal benefits they relied on for much of the year, economists and the chair of the Federal Reserve have said now is the time for a substantial infusion of federal money to fuel a still-shaky economic recovery.

A majority of voters agree, saying they would support a $2 trillion stimulus package. And Mr. Trump, who only two weeks ago scuttled the bipartisan talks, is now also pushing urgently for Congress to “go big,” as he grasps for political advantage in the waning days of his re-election race.

The latest White House offer would cost nearly $1.9 trillion, White House officials said, nearly four times the size of the $500 billion package that Senate Republicans hoped to advance on Wednesday in a bid to show voters that they were willing to provide some aid — just not what Democrats and Mr. Trump have been discussing. (Democrats were likely to object to the package as inadequate and prevent it from clearing the 60-vote threshold it would need to advance.)