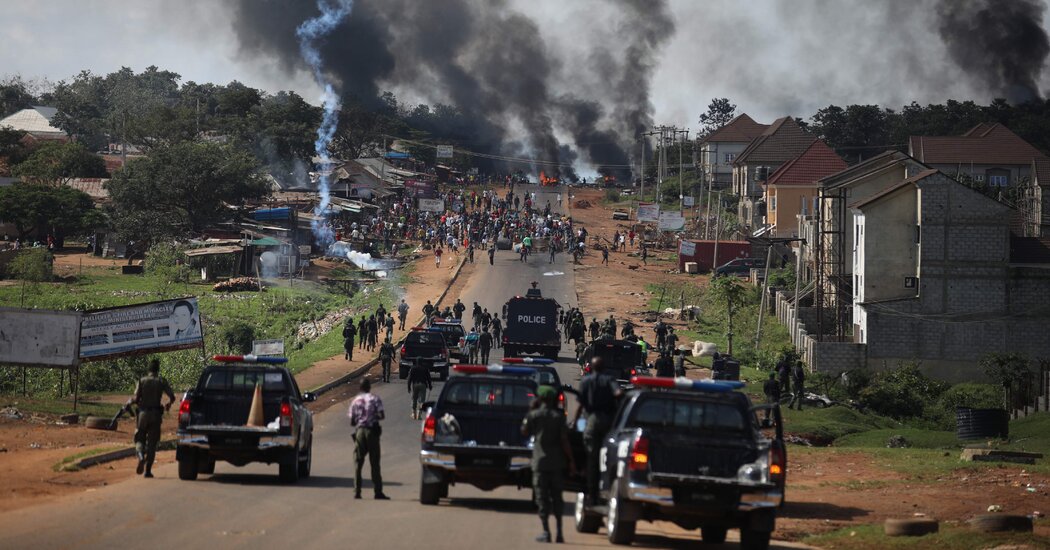 LAGOS, Nigeria — Nigerian security forces opened fire Tuesday night at a demonstration in Lagos against police brutality, hitting several people according to witnesses, in a major escalation of the unrest that has gripped the country for two weeks.

The extent of the casualties was unclear, but some witnesses said that they saw people who were killed, and videos posted to social media showed wounded people, crackled with apparent gunfire and showed uniformed forces shooting into the air.

The shooting came toward the end of a day of mounting violence in multiple cities, with the national police deploying riot squads in the capital, Abuja, in Lagos and elsewhere. The unrest spread even after President Muhammadu Buhari attempted to respond to the protesters’ demands by announcing last week that he would disband a special unit of police officers accused of brutalizing people.

Adding to the sense of spiraling chaos, officials said about 2,000 inmates had escaped on Monday in a prison break in Benin City, in southern Edo state.

After news reports early Tuesday that police had killed two or more people in Lagos, the country’s largest city and economic hub, a crowd set a police station there ablaze. Despite the violence and a curfew declared by the governor of Lagos State, protesters refused to disband, blocking roads and demanding that police officers accused of wanton violence be put on trial.

Uniformed forces were deployed to the Lekki Toll Gate area, an upscale suburb of Lagos, where the biggest ongoing protests have been held, largely peacefully, since October 7. Beginning at around 7 p.m. on Tuesday, some of them began firing — shortly after the streetlights unexpectedly went out and security cameras were removed from the scene, witnesses said.

A protester streaming the scene live on Instagram, Obianuju Catherine Udeh, a disc jockey who goes by DJ Switch, said she counted seven casualties around her. Sporadic gunfire went on for about an hour.

“We’ve already told them we’re not going anywhere,” she said. In front of her, a body lay motionless, and nearby protesters crowded around a man with what appeared to be a gunshot wound in his leg.

Demonstrators said they were corralled into one area by fires, with no safe way out.

“The whole place is blocked, there are soldiers everywhere and they came in guns blazing,” DJ Switch said, before her livestream suddenly ended. “Are they going to shoot all of us? The only weapon we have is the Nigerian flag.”

The governor of Lagos State, Babajide Olusola Sanwo-Olu, said that people bent on creating chaos had hijacked the mostly peaceful protests against police brutality — a claim supported by witness accounts of the demonstrations.

“Lives and limbs have been lost as criminals and miscreants are now hiding under the umbrella of these protests to unleash mayhem on our state,” the governor said in a statement.

After the police station was burned, the governor declared a 4 p.m. curfew, giving people about four hours to get home in an immense metropolitan area with some 14 million people and some of the world’s worst traffic jams. Many people had little hope of complying with the curfew; many others did not try.

Protesters in Nigeria, the most populous country in Africa, have been demanding that the government disband a rogue police unit called the Special Anti-Robbery Squad, commonly known as SARS, and that they say particularly robs, tortures and even kills well-dressed young people who the officers think might have money. The crowds have also called for punishment of officers who commit brutality.

Last week, President Buhari agreed to dismantle SARS and carry out other police reforms, vowing to “ensure that all those responsible for misconduct are brought to justice.”

But the demonstrations have not abated. People note that the government has promised before to do away with SARS, yet it still exists, and they argue that a newly created police unit will just be the same menace in new uniforms.

On Monday, Lagos inaugurated a panel of inquiry to investigate allegations of abuse, but proceedings have not begun. Three other states have also made the same move.

“Most of the inmates held at the centers are convicted criminals serving terms for various criminal offenses, awaiting execution or standing trial for violent crimes,” Mr. Manga said.